Despite spending about $36 million to reduce the subway homeless population, the homeless situation in the subways has grown significantly worse, in part because the city’s Department of Homeless Services (DHS) has neglected to monitor a non-profit that has repeatedly failed to conduct outreach it was hired for, according to an audit released today by New York State Comptroller Thomas P. DiNapoli.

“Homeless outreach in the subway has been so shoddy and with so little oversight from DHS and MTA, that it should be no surprise the homeless population in the subways has grown,” DiNapoli said. “DHS seems to have hired the Bowery Residents’ Committee to deal with the subway homeless population, then walked away. BRC’s failure to even come close to fulfilling its contract has left vulnerable homeless men and women badly served and straphangers fending for themselves in increasingly difficult circumstances.”

Beginning in Jan. 2019, DiNapoli began releasing a series of audits examining MTA’s outreach efforts to the homeless population in the transit system including Long Island Railroad and Metro-North Rail Road. These audits have generally found lax MTA oversight of the non-profit entities it has hired, even as they failed to perform outreach as expected.

The audit DiNapoli released today, examined DHS’ contract with the non-profit Bowery Residents’ Committee (BRC) to provide outreach in the subway and place homeless individuals in shelters. The three-year contract was the result of an agreement between DHS and the MTA to share the cost of outreach, which has since totaled about $6 million annually.

Questionable Placement Claims
Auditors found the MTA and DHS cannot trust that BRC is placing homeless into shelters as it claims it does. BRC said it placed 600 clients into shelters since 2016, but auditors determined the organization’s claims were not reliable. Auditors looked at 50 supposed placements and found 20 of them (40 percent) were either not placed in the reported shelter or were not placed on the date reported. For example:

DHS’s use of the term “placement” — as initially explained to auditors by DHS — included not just placement as the general public would expect, but also potential placement, including when a homeless individual agreed to go to a shelter at some future time. In subsequent discussions, DHS officials retracted this, and said placement is only counted when someone is actually placed in a facility.

Didn’t Make Station Visits
Based on the homeless population, BRC was supposed to visit stations either twice a week (high risk station), once a week (medium risk), or once every six weeks (low risk). In the Bronx, BRC failed to make required visits to more than half of the high risk stations and medium stations, while in Brooklyn it didn’t make the required visits to one-third of the high risk stations and over half of the medium risk stations. BRC is supposed to give DHS a monthly borough report on subway outreach, but DHS was unable to provide 14 months’ worth of these reports, including 10 months for Brooklyn. In response to the findings, DHS said it would resume unscheduled ride-along visits with BRC workers.

Outreach Observations
Auditors made 12 station visits (7 announced and 5 unannounced) and found BRC outreach fell short. They were not providing services to the extent possible and in some cases offered no services at all. During four of the five unannounced visits outreach workers were scheduled to visit a station but never showed up:

DHS also does not make unannounced visits to check on outreach. Instead, they do ride-along visits with workers. During 2018, it conducted just six ride-alongs, three of them taking place in one month. Without stronger oversight, DHS has no assurance BRC’s is actually doing the work for which it was hired. 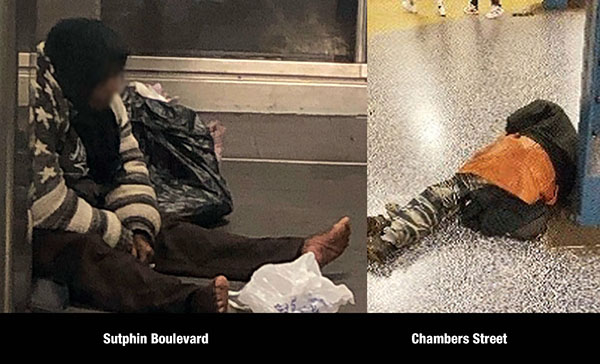 311 Response
As DHS’ agent for homeless services in the subway, BRC is supposed to respond to 311 calls within two hours and report on its actions to DHS monthly. DiNapoli’s auditors looked at 121 calls over two months and found BRC didn’t respond at all or responded late to 34 (28 percent) of the calls. In 2017, a change in the format for monthly reporting on 311 calls made it impossible for DHS to assess whether BRC was meeting its two-hour response requirement.

Medically Vulnerable Individuals
DHS’ contract calls for BRC to keep a list of homeless individuals with medical problems, but a review found in many instances it didn’t record enough information to be useful. Examples of entries that gave no insight into a person’s identity simply said “’Multiple Backpack Lady' at the 34th St. Harold [sic] Sq NQR” and “’I’M OKAY F Train Unknown’ at 14th Street-6th Ave FLM.”

While some people may resist giving their names, the complete absence of any detailed information makes it difficult, if not impossible, to follow up with homeless individuals with the most serious needs. DHS developed a database, StreetSmart, to let outreach workers collect as much identifying information as they can, including physical descriptions, partial names, and locations frequented and photos. Auditors found BRC workers kept a binder of photos instead of uploading them to StreetSmart.

CPR and Overdose Training Lacking
Outreach workers are supposed to be certified in CPR and Opioid Overdose Prevention. Auditors found that 19 (29 percent) of BRC’s 66 outreach workers lacked certification in one or the other, including seven who had no training in either. DHS said they would take steps to ensure all workers are trained and able to provide life-saving assistance.