New York City has added more than 900,000 jobs over the past ten years and its 24 percent rate of growth outpaced the nation and New York state, according a report released today by State Comptroller Thomas P. DiNapoli.

“New York City’s unemployment rate is at a historic low and job growth over the past decade has been unprecedented,” DiNapoli said. “The strong employment trends have helped boost personal income and sales tax collections, making it easier for the city to afford new services and to balance the budget. Still, some sectors have lost jobs in the past year or seen growth slow.” 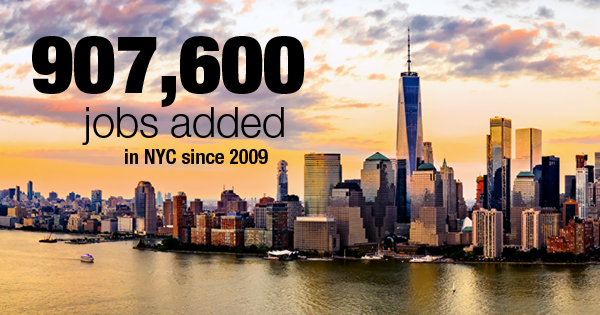 New York City is benefiting from the longest and largest job expansion since the end of World War II. The 907,600 jobs added since 2009 is twice as many as during the 1992-2000 expansion, the previous record-holder, DiNapoli’s report found.

Employment in social assistance has risen steadily since 1990, reaching 212,800 in 2019. Job growth in the social assistance sector was particularly strong in the past two years, with 10,900 jobs added in 2018 and another 12,300 added in 2019. Much of the growth was driven by an increase in jobs that serve the elderly and people with disabilities.

Business services (which includes accountants, lawyers, programmers and clerks) added 18,200 jobs in 2019, the smallest gain since 2010 when the current job expansion began. Nonetheless, the sector added 211,200 jobs between 2009 and 2019, the most of any sector during this period, accounting for 23 percent of those added in the city since the end of the recession.

Job growth in the construction sector has begun to slow although it still set a record in 2019. While the industry added 300 jobs in 2019, it was the smallest gain since the end of the recession.

DiNapoli’s report notes that employment in the technology sector, made up of components of the business services, information and manufacturing sectors, grew by 78 percent (62,000 jobs) between 2009 and 2018 (the latest available data), reflecting New York City’s expanding role as a national center for technology.

The boroughs outside of Manhattan were responsible for 48 percent of the citywide private sector job gains over the past ten years, a larger share than in any prior expansion since at least 1975. As a result, the unemployment rate has fallen to historic lows across the city.

While the unemployment rate for African-Americans declined from 15.4 percent in 2009 to 5.7 percent in 2017, it increased to 7.8 percent in the two following years. At the same time, rates for Asians (1.8 percent), Whites (2.6 percent) and Hispanics (4.8 percent) have continued to decline to all-time lows.