Overall growth in local sales tax collections statewide in 2019 was relatively strong, according to report released today by New York State Comptroller Thomas P. DiNapoli. Collections across the state, totaling $18.3 billion in 2019, grew by $815 million or 4.7 percent, from the previous year. While this was slower than the 5.3 percent annual growth for 2018, it exceeded growth in all other years since 2013.

“The economic climate in New York state was positive through 2019 with continued employment and wage growth,” DiNapoli said. “Although all regions saw increased sales tax collections, the upstate regions had weaker collections than the downstate region.” 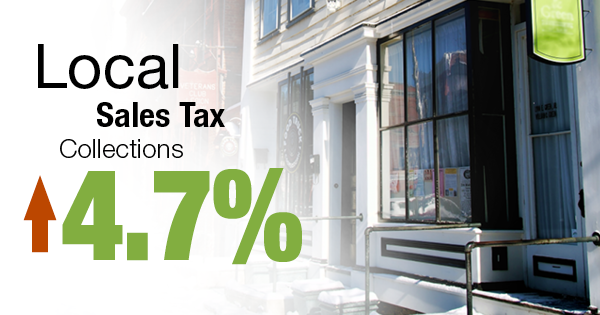 The Finger Lakes region also saw collections strengthen over the previous year, with annual increases of 3.7 percent in 2018 and 4.1 percent in 2019.

Thirteen of the 17 cities (other than New York City) that impose a sales tax experienced increases in year-over-year collections in 2019. The City of Oneida had the strongest growth (8.6 percent), closely followed by Norwich (8.4 percent). Conversely, the cities of Gloversville, Salamanca, Olean and Oswego saw their collections decline from the previous year, though decreases in Salamanca and Olean were mostly due to technical adjustments.

Between 2018 and 2019, county-only sales tax collections outside New York City increased by 4.4 percent, growing in 54 of 57 counties.

DiNapoli’s report pointed to the impact of the changes made by the state to the Aid and Incentives for Municipalities (AIM) program in State Fiscal Year 2019-20. The Comptroller was directed to replace the funds that were cut by withholding $59 million from county sales tax collections to make AIM-related payments to most towns and villages. According to the report, the total statewide year-over-year increase for all county sales tax collections after subtracting AIM-related payments would decrease to 3.9 percent instead of 4.4 percent (See Figure 6 in the report).

Read the report, or go to: https://www.osc.state.ny.us/localgov/pubs/research/growth-in-local-sales-tax-collections-second-half-2019.pdf