New York State Comptroller Thomas P. DiNapoli today announced the New York State Common Retirement Fund (Fund) had a -2.68 percent return on investments in the state fiscal year (SFY) that ended on March 31, 2020, reflecting a slight decrease as a result of the COVID-19 pandemic. The Fund ended its fiscal year during the early outbreak of the pandemic in the United States with a value of $194.3 billion. Globally, assets swiftly recovered in the second quarter of 2020.

“Despite very solid returns through February, the coronavirus sent markets into a tailspin just as we were closing the books on our fiscal year,” DiNapoli said. “The Fund has already recovered much of those losses, but volatility and uncertainty will persist until our public health crisis is resolved. Fortunately, the state’s pension fund entered this crisis as one of the strongest in the nation, and remains well-positioned to weather these challenging times and provide retirement security for our members for years to come.”

In June, the Fund was ranked by Pew Charitable Trusts as the second best-funded pension fund in the nation with a funding ratio of 98 percent, based on 2018 data. An excellent funding ratio means the New York State and Local Retirement System (NYSLRS) has the funds on hand to provide retirement security to its more than one million active state and local government employees, retirees and their beneficiaries. The Fund's value reflects retirement and death benefits of $13.25 billion paid out during the fiscal year.

Employer contribution rates are determined by investment results over a multi-year period along with numerous other actuarial assumptions, including wage growth, inflation, age of retirement and mortality. Contribution rates are determined based on recommendations from the Actuary in September. Integral to the Fund’s strength have been state and local governments, who consistently pay their contributions in good times and bad.

Every three years the Fund is required to undergo an independent Fiduciary and Conflict of Interest Review. The Review, most recently performed by Duff & Phelps, examines the Fund to ensure it is well-governed and ethically and efficiently managed for the sole benefit of its members and beneficiaries.

The latest Review found that the Fund “has a strong governance framework with sound internal controls and is managed efficiently and effectively.” The report, which involved interviews with more than 30 staff, including Comptroller DiNapoli and the Fund’s Chief Investment Officer Anastasia Titarchuk, concluded that “The Fund is demonstrating a high level of operational transparency and in many cases appears to be in the vanguard of industry standards in this area.” Additionally, the report found “the Comptroller and the CRF Staff manage the Fund to the highest level of ethical standards.”

As of March 31, 2020, the Fund had 49.07 percent of its assets invested in publicly traded equities. The remaining Fund assets by allocation are invested in cash, bonds and mortgages (26.23 percent), private equity (11.19 percent), real estate and real assets (9.66 percent) and absolute return strategies and opportunistic alternatives (3.85 percent).

The Fund’s long-term expected rate of return is 6.8 percent. The Fund’s value and rate of return in prior years is available online: https://www.osc.state.ny.us/sites/default/files/press/documents/pdf/2020-07/nyscrf-values-chart-2020.pdf 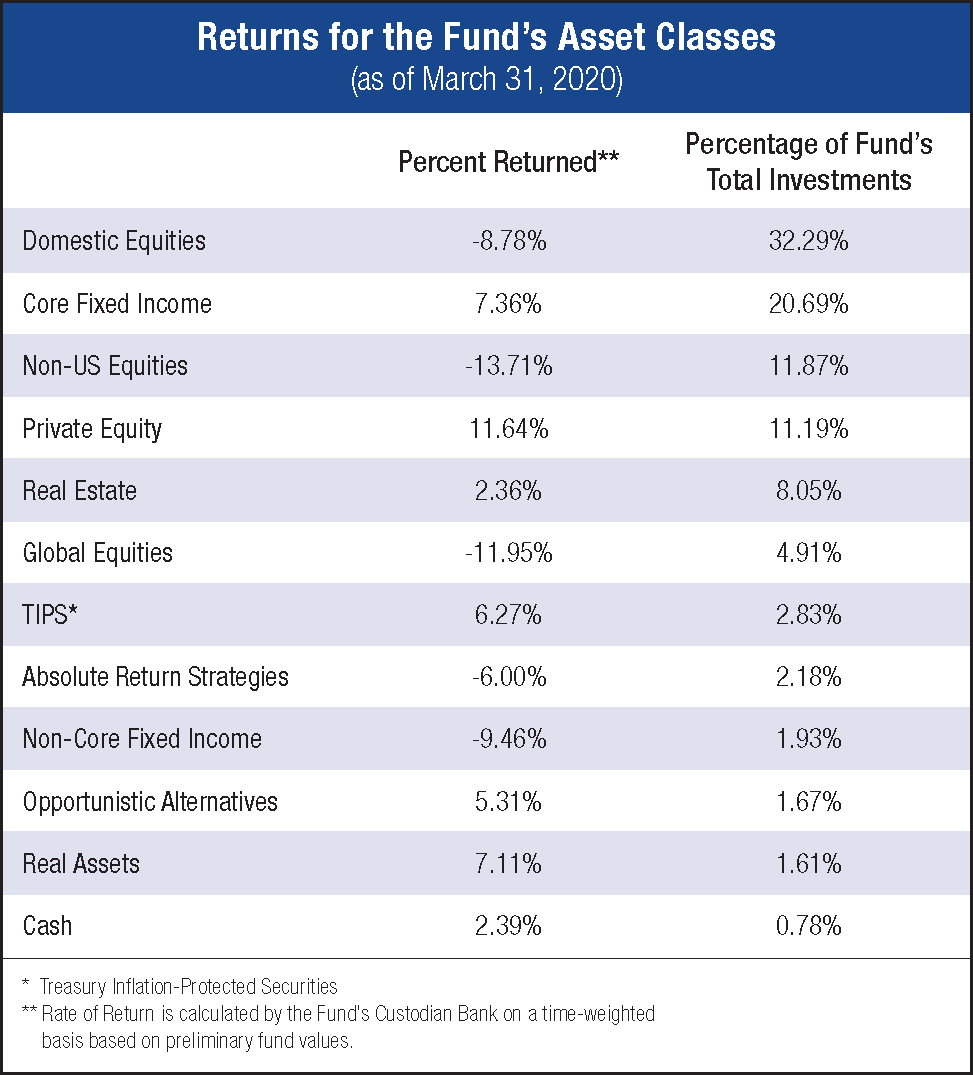