Sales tax revenue for local governments in July fell 8.2 percent compared to the same period last year, according to New York State Comptroller Thomas P. DiNapoli. Collections for counties and cities in July totaled $1.3 billion, or $116 million less than in July 2019. Although revenue is still down compared to July 2019, the decline is less steep than any month since March, when the COVID-19 pandemic began to affect sales tax collections.

Nearly every county in every region of the state saw overall July collections drop year over year: only four counties had increases, including Westchester, where its tax rate increase in August of 2019 boosted year-over-year growth. County decreases ranged from 2.1 percent in Essex to 19.7 percent in Schuyler. New York City experienced a 7.3 percent decline, amounting to a $44.6 million reduction in revenues. While less dramatic than the 46 percent ($375 million) decrease seen in June, this represents another month where the city’s sales tax revenue dropped significantly over the same month in the prior year.

“New York’s local governments continue to see a significant downturn in sales tax collections, a major source of revenue. This is going to have a long-lasting effect on revenues for counties, cities and many towns and villages around the state,” DiNapoli said. “The federal government needs to step up and provide financial help to those hit hard by this virus. Without action, communities may need to make severe cuts to critical services.”

Last month, DiNapoli reported that local sales tax collections dropped 27.1 percent in the April-June quarter, down $1.2 billion from collections in the same quarter of 2019.

Over the five-month period of the pandemic’s effects (starting in March, when only New York City showed losses, and continuing through July), local governments have received $1.4 billion (18.7 percent) less than they did during the same period in 2019. 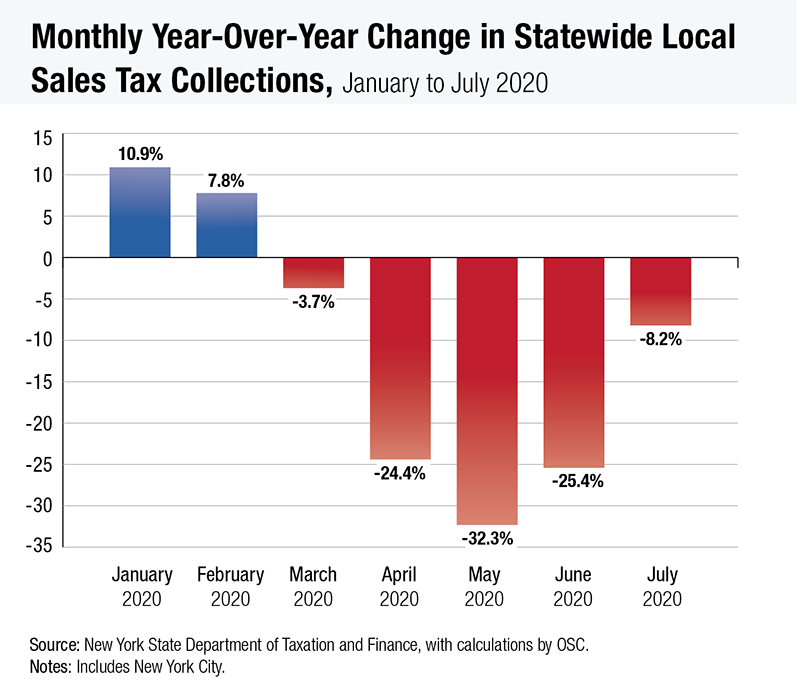