DiNapoli: Federal Relief Funds Should Have Been Better Targeted to Communities Hardest Hit by COVID-19

State Comptroller Thomas P. DiNapoli today said the $150 billion federal Coronavirus Relief Fund (CRF) could have been better aimed to the localities, especially New York City, that suffered the most severe impacts from the novel coronavirus, instead of being based on the most recent U.S. Census Bureau population data. DiNapoli released an analysis that found the communities with high infection rates have spent most of their CRF while other communities with low infection rates at the time the aid was given have not.

“The formula used by the federal government to distribute the coronavirus funding, while well-intentioned, missed the mark,” DiNapoli said. “Targeting aid to the communities that suffered the worst from the outbreak would have been more prudent than basing the distribution of funds on the population. As a result, regions like New York City and Long Island are facing significant budget shortfalls.”

DiNapoli’s analysis found that if the $27.6 billion paid directly to local governments nationwide under the Coronavirus Aid, Relief and Economic Security (CARES) Act had been distributed among the same local governments based on their shares of total confirmed COVID-19 cases as of August 24, 2020:

If funding was allocated based on confirmed cases at the time of the CARES Act legislation becoming law in March, New York City would have received $9.4 billion.

The use of CRF funds is restricted to unbudgeted financial needs associated with the COVID-19 emergency during the period from March 1, 2020, to Dec. 30, 2020. Under current law, the funds cannot be used to offset revenue losses. CRF funds can be used proactively to prepare for, mitigate or respond to the spread of the novel coronavirus. 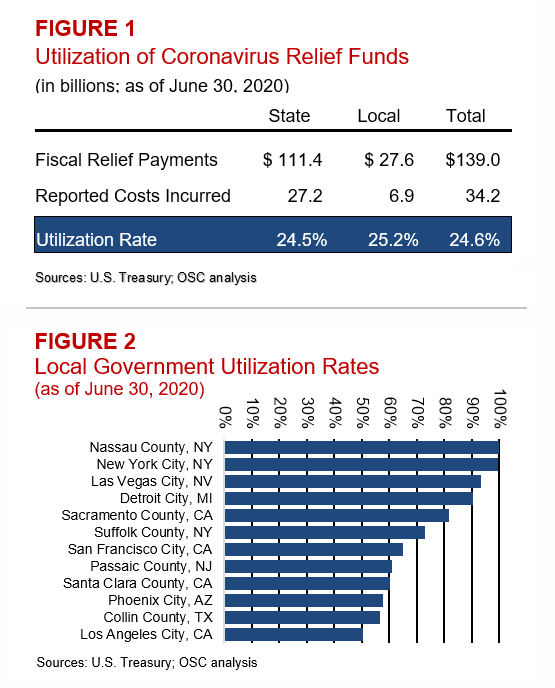 DiNapoli’s report found that Nassau County spent all of the $102.9 million it received, New York City used 99.4% of its $1.4 billion, and Suffolk County spent 73% of its $257 million as of June 30. The majority of the spending for the city and Long Island was used for healthcare payroll and medical expenses. Local governments with a population of less than 500,000 were ineligible to receive a direct payment.

“Given the dramatic impact of COVID-19 on state and local revenues in New York and elsewhere, significant additional relief from Washington is essential, including permitting CRF funding to be used to offset revenue losses, particularly to the localities most directly impacted by the pandemic, including New York City,” DiNapoli said.

Report:
Assessing the Targeting of the Federal Coronavirus Relief Funds