DiNapoli: 31 School Districts Designated in Some Level of Fiscal Stress

“This is a time of unprecedented uncertainty as the COVID-19 pandemic continues to disrupt school district operations and finances,” DiNapoli said. “I urge school district leaders to closely monitor their financial conditions, even if their fiscal stress scores were low in the early days of the crisis.” 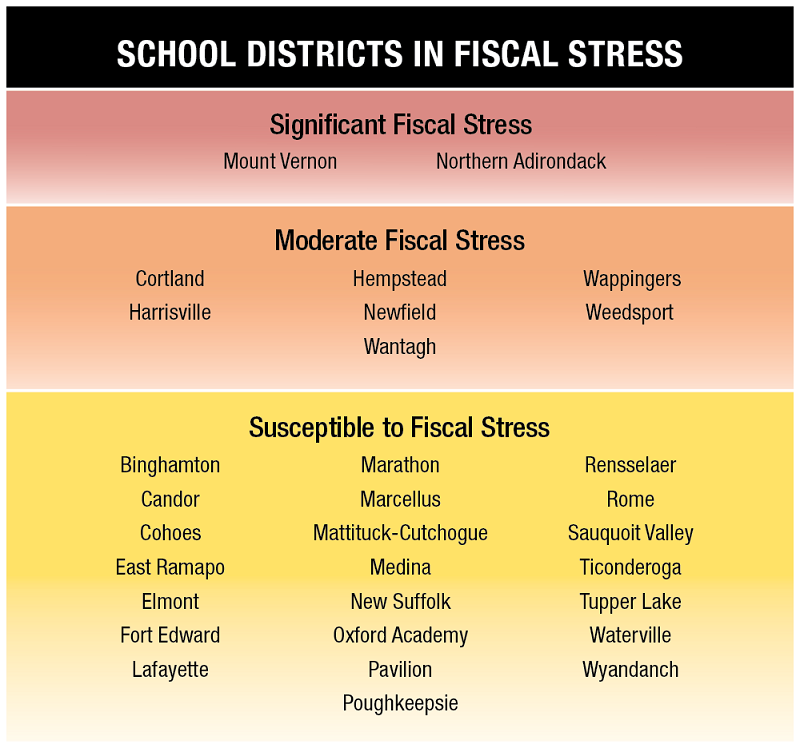 School districts in fiscal stress share some common issues. Nearly all fiscally stressed school districts (87.1 percent) have low liquidity, also known as “weak cash position,” meaning there may not be enough cash on hand to cover operating costs. Almost half have a new or increased reliance on short-term cash flow debt, which can indicate structural budgetary imbalance. Operating deficits and low fund balances are also warnings of fiscal stress.

DiNapoli’s report also reviewed environmental risk factors, which are often out of the district’s control and could be related to an increased chance of fiscal stress. Environmental risk factors include having a high percentage of economically disadvantaged students, a high teacher turnover rate, a decrease in local property values, a low budget vote approval rate, a high percentage of English language learners, and large class sizes. Environmental stressors are likely to have a financial impact during a recession, such as the one that began in 2020.

In addition, the state has withheld 20 percent from certain state aid payments to school districts, amounting to at least $300 million statewide. In mid-January 2021, the state Division of the Budget indicated that most of the funds withheld are expected to be paid in the current state fiscal year. The possibility of additional federal aid may also mitigate some risk of stress in the near term.