The Executive Budget for State Fiscal Year (SFY) 2021-22 relies on a range of actions to respond to the pandemic as well as eliminate a looming gap  — spending cuts, new revenues, use of fund balances and increased borrowing —  demonstrating the need for significant federal aid, according to an initial analysis by New York State Comptroller Thomas P. DiNapoli.

DiNapoli’s analysis noted that federal funds are being used to pay for operating expenses typically covered by the General Fund, which could lead to greater out-year gaps and worsen the state’s structural imbalance between revenue and spending. He also questioned whether certain debt proposals were necessary.

“The pandemic has caused unimaginable suffering and loss, and its ongoing toll is dauntingly unquantifiable as the crisis rages,” DiNapoli said. “As the proposed budget makes clear, New York has been hit hard. The consequences of the pandemic will be with us for a long time and federal funds have been essential in shoring up the state’s finances, but more is needed. While the outlook for state tax revenues has improved somewhat, any shortfall in anticipated federal assistance would drive undesirable budgetary choices that hurt New Yorkers.”

The budget authorizes the director of the Division of the Budget (DOB) to impose across-the-board cuts to local assistance, including Medicaid and other essential services during SFY 2021-22. The budget raises taxes on high earners, delays tax reductions for middle class families, and cuts state funding for local governments and state agency operations.

Federal aid has helped avert devastating state spending cuts and loss of services in the current fiscal year. The Financial Plan estimates spending from federal operating aid will total $76.6 billion in SFY 2020-21, up 30.2 percent from the prior year, largely reflecting measures enacted in 2020. This spending is expected to total $72.3 billion in SFY 2021-22, a decline of 5.6 percent.

The budget reflects the expectation that the state will be allocated an additional $6 billion in unrestricted federal relief and stimulus aid over the next two fiscal years: $3 billion each in SFYs 2021-22 and 2022-23. The budget would be deemed “unbalanced” if less than $3 billion is received as of Aug. 31, 2021. If that occurs, spending from local assistance appropriations would then be withheld across-the-board by the budget director, with exceptions. If implemented, these cuts would compound the challenges facing local governments, not-for-profit service providers and others.

In several other major areas of spending, federal funds allocated via the stimulus acts enacted to date are used to offset significant state aid cuts or spending. DOB has indicated that if $15 billion in additional unrestricted federal funds were allocated to New York state, rather than the $6 billion assumed in the Financial Plan, some of the proposed state spending cuts and tax increases could be avoided.

Medicaid spending pressures have mounted through the pandemic, with enrollment growing by nearly 12 percent in SFY 2020-21 to about 6.8 million (as of November 2020). The budget continues the authorization granted in SFY 2019-20 for the budget director to impose across-the-board Medicaid cuts, including $467 million in SFY 2021-22 and again in SFY 2022-23. The Financial Plan anticipates the state receiving $3.5 billion in enhanced Federal Medical Assistance Percentage (FMAP) funding in SFY 2020-21, and at least $995 million in the coming fiscal year. Given this, it will be essential for the federal government to continue enhanced FMAP funding indefinitely. If this federal support disappears, the state will be faced with difficult choices to fill the gap, putting New York's most vulnerable residents at risk.

The budget reduces state support for school districts by $607 million, or 2.1 percent, on a school year basis. Among the most significant changes, the budget proposes to combine $3.7 billion in certain expenditure-based aids into a single block grant and cut funding by $392.5 million, or 10.5 percent. It also proposes a recurring “local district funding adjustment” reduction totaling $1.35 billion, offset by a one-time allocation of $3.85 billion in additional federal stimulus funds, which can be used through Sept. 30, 2023.

The budget proposes to eliminate Aid and Incentives for Municipalities (AIM) for towns and villages, leaving cities the only class of local governments funded by the program. Overall AIM funding for cities is reduced 5 percent, to $617 million, with reductions varying by city in a range of 2.5 percent to 20 percent. This would continue a trend in recent years of flat or declining AIM funding and further shrink the state’s unrestricted funding to municipalities, increasing pressure on local tax bases. AIM-related payments would now be made to towns and villages from a withholding and redirection of county sales tax revenue. These payments would be reduced by 20 percent.

Total state-supported debt outstanding would increase by more than $8 billion or 13.4 percent in the coming year to $67.7 billion, and by another $8.8 billion over the next two years, largely to support MTA capital spending. The budget proposes short-term borrowing options at the same $11 billion authorization level as was enacted in SFY 2020-21.

The budget proposes to bypass protections put in place to curtail the state’s use of debt and limit costs by suspending the state’s statutory caps on debt and debt service for debt issued in the new fiscal year, as was first done in SFY 2020-21. It also suspends for SFY 2021-22 the 30-year maximum term limitation established in the Debt Reform Act for state-supported debt. Excluding short-term note issuances for cash flow needs and the proposed refinancing of New York City Sales Tax Asset Receivable Corporation (NYC STARC) bonds with state-supported debt, this would omit approximately $19.5 billion in new money debt issuances from the state’s debt cap during the two years.

While the factors that drove the need for short-term borrowing in 2020 have not disappeared, the level of concern has diminished due to reduced uncertainty and improved financial outlook. This calls into question the necessity of these proposals, especially at the proposed levels. Also, continuing to circumvent laws established to promote responsible and sustainable debt practices is troubling.

Taxes and Other Revenues

The budget imposes a Personal Income Tax (PIT) surcharge on taxpayers with incomes over $5 million for three years, with top tax rates increasing at varying amounts, up to 10.82 percent for incomes above $100 million. The budget also delays the next step of the middle class tax cuts that started in 2018 and extends the current, temporary top rate of 8.82 percent for one year, resulting in a projected revenue increase of $1.9 billion in SFY 2021-22.

It authorizes mobile sports wagering through one of the four currently licensed casinos, with projected revenues of $49 million in SFY 2021-22 and nearly $500 million by SFY 2024-25. The budget also legalizes adult use of marijuana. Receipts of $20 million are projected in SFY 2021-22, increasing to $350 million when fully effective in SFY 2025-26, with funds to be set aside annually, starting with $10 million in SFY 2022-23, for programs in communities affected by previous criminalization of marijuana.

Relative to its October 2020 Mid-Year projections, DOB has raised its forecast for overall tax receipts by $3.3 billion in the current year, which would still leave the total $5.1 billion below receipts in the previous year.

All Funds disbursements would increase by $213 million (0.1 percent), to $192.9 billion in SFY 2021-22, after an expected 11.4 percent increase this year, covered largely by one-time federal aid. All Funds receipts are expected to decline in the coming year by $3.8 billion (2 percent) to $189.7 billion, primarily due to declining federal aid and $4.5 billion in proceeds received from short-term borrowing in SFY 2020-21 that is not expected in the coming fiscal year. State Operating Funds disbursements are projected to increase by $1.2 billion (1.2 percent) to $103.4 billion, reflecting federal funds supplanting state funds for school aid and other factors.

The Financial Plan projects the General Fund will end the year with a $7.2 billion balance, compared to $16.6 billion as of Dec. 31, due, in part, to the repayment of $3.4 billion from short-term borrowing earlier in the year.

In SFY 2021-22, the General Fund balance is expected to decline to $5.7 billion by the end of the fiscal year, a decline of 36 percent since March 2020 and the lowest year-end balance since SFY 2013-14. Statutorily restricted reserves of $2.5 billion, primarily rainy day reserves, are expected to be preserved, with no additional deposits planned.

Analysis of the budget by the Office of the State Comptroller continues and a report will be issued in the coming weeks. 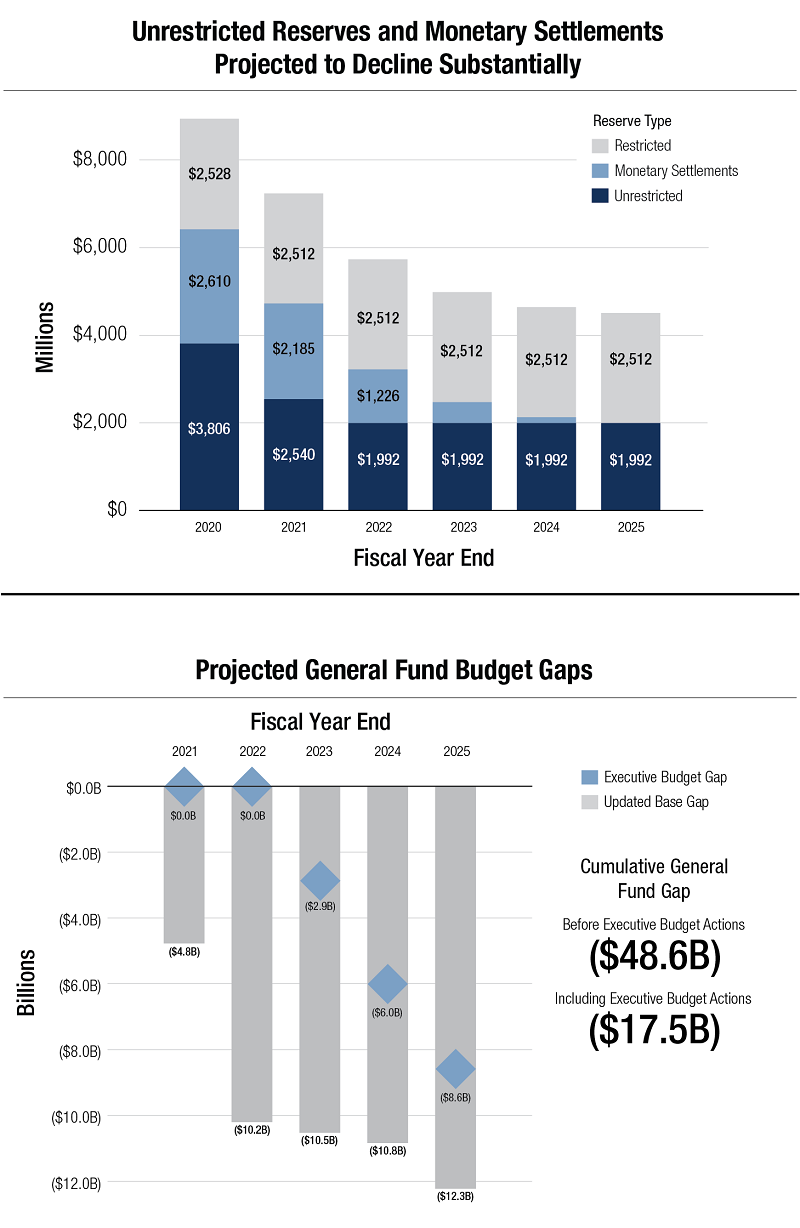