State tax receipts through the first nine months of the state fiscal year were $2.5 billion lower than last year, but were $1.8 billion higher than anticipated by the state Division of the Budget (DOB), according to the monthly State Cash Report released by New York State Comptroller Thomas P. DiNapoli.

Tax receipts in the month of December totaled $8.4 billion, $422.5 million above last year, and $1.4 billion above DOB’s latest projections.

“December’s tax receipts were better than expected, but the revenue challenge is still with us,” DiNapoli said. “President-elect Biden’s proposed stimulus plan, with new aid to help states and localities fill gaps created by the COVID-19 pandemic, is another hopeful sign. We still have a long way to go, and it’s essential that leaders in Washington act on a robust plan of assistance as quickly as possible.” 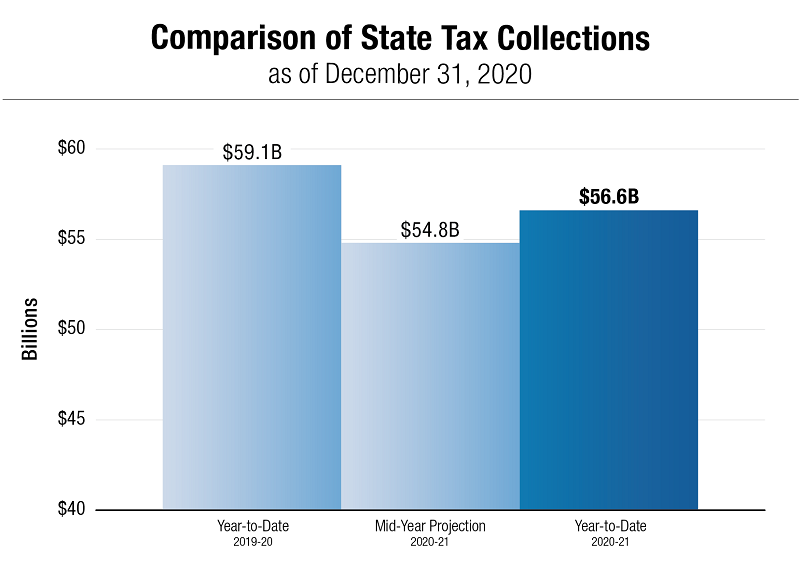 State Operating Funds spending through the first nine months of the fiscal year totaled $63.9 billion, which was $7.8 billion, or 10.8 percent, lower than last year. This is largely due to higher federal reimbursement for Medicaid spending, as well as the withholding of certain payments.

As of December 31, the General Fund held a balance of $16.6 billion, $2 billion higher than DOB projections, and $8.4 billion higher than last year at the same time. The higher balance is driven partly by withheld payments as well as receipts from short-term borrowing that DOB anticipates repaying before the end of the fiscal year. The state has repaid $1 billion of that borrowing, with the remaining $3.4 billion due by March 31.