The New York State Common Retirement Fund’s (Fund) estimated return in the third quarter of the State Fiscal Year (SFY) 2020-21 was 10.01 percent for the three-month period ending Dec. 31, 2020, and ended the quarter with an estimated value of $247.7 billion, according to New York State Comptroller Thomas P. DiNapoli.

“Continued growth in the stock market has added to the state pension fund’s dramatic increases this year,” DiNapoli said. “More importantly, given the ongoing market volatility, our pension fund is strong and well-diversified and ready to meet any ups and downs. Investment gains will remain fragile until we overcome the COVID-19 pandemic and see more federal stimulus bolstering the broader economy. We will continue to manage investments with caution and with a long-term perspective that has been the foundation of our success.”

The Fund's estimated value reflects benefits of $3.44 billion paid out during the quarter. Its audited value as of fiscal year end March 31, 2020, was $194.3 billion.

As of Dec. 31, 2020, the Fund had 54.8 percent of its assets invested in publicly traded equities. The remaining Fund assets by allocation are invested in cash, bonds and mortgages (22.2 percent), private equity (9.8 percent), real estate and real assets (8.0 percent) and credit, absolute return strategies and opportunistic alternatives (5.2 percent). 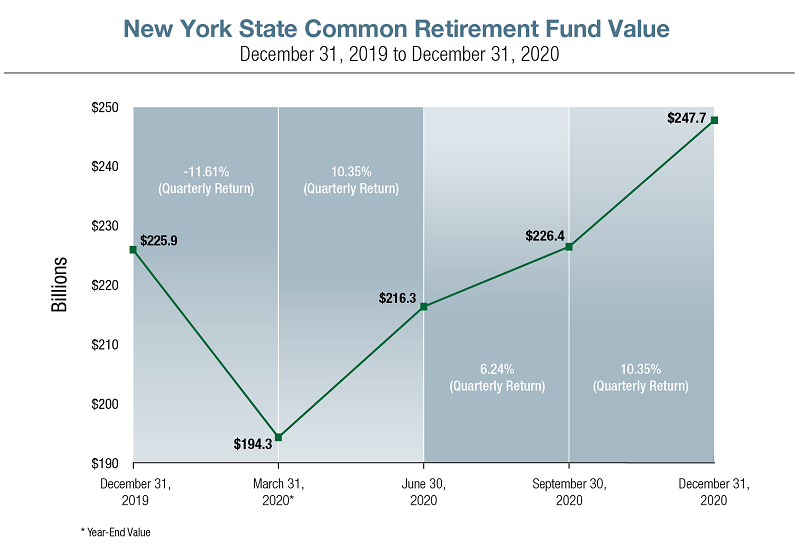