Although year-to-date collections continue to lag prior year results, tax collections through February were $758.4 million higher than forecast in the most recent Division of the Budget (DOB) update to the State Financial Plan, according to the monthly State Cash Report released today by New York State Comptroller Thomas P. DiNapoli. State tax revenues for fiscal year 2021 totaled $75 billion through the end of February.

“There is reason to be cautiously optimistic with better-than-forecasted tax revenues from February and the passing of significant additional federal assistance, thanks to President Biden’s American Recovery Plan,” DiNapoli said. “While these resources will be helpful in the state’s ongoing recovery effort, it is important to use them responsibly and think long-term, as challenges remain.” 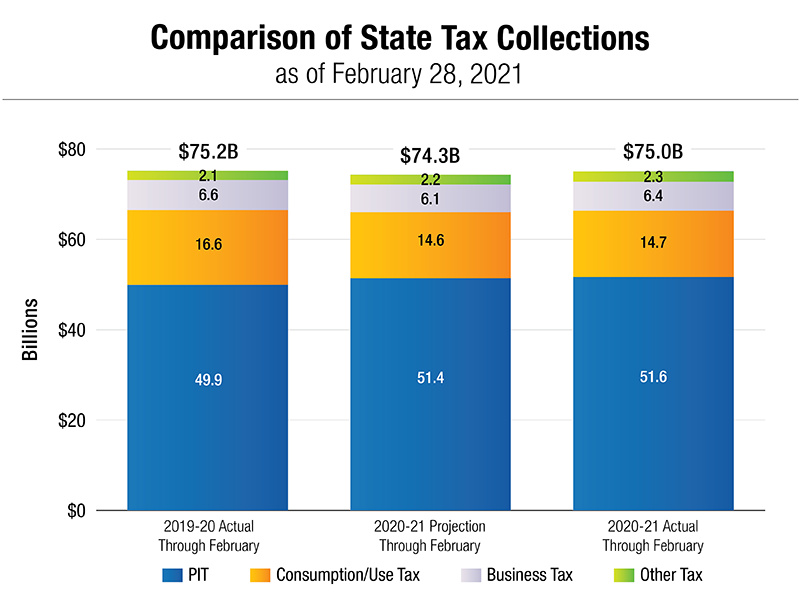 Tax revenues in the month of February totaled $7 billion, $1.8 billion more than received in February 2020. Personal income tax receipts in February were $5.4 billion, or 45.6 percent, above February 2020, primarily due to lower refunds. However, monthly consumption and use taxes, which include sales tax receipts, fell short of the previous February, and were down $60.5 million, or 4.9 percent. Year-to-date, consumption and use tax collections were $1.9 billion, or 11.4 percent less from the same period last year.

State Operating Funds spending through February totaled $77.1 billion, which was $8.7 billion, or 10.1 percent, lower than last year. This is largely due to higher federal reimbursement for Medicaid spending, as well as the withholding of certain payments.

As of February 28, the General Fund held a balance of $20.3 billion, $327.2 million higher than DOB projections, and $9.4 billion higher than last year at the same time. The higher balance is driven partly by withheld payments as well as receipts from short-term borrowing that DOB anticipates repaying before the end of the fiscal year. The state has repaid $1 billion of that borrowing, with the remaining $3.4 billion due by March 31.