Despite Decline Compared to 2020, Collections Show Improvement Over the Past Three Quarters

Sales tax revenue for local governments in New York State declined by 3.9 percent in the first quarter compared to the same period last year, according to State Comptroller Thomas P. DiNapoli. Sales tax collections from January through March totaled $4.3 billion, which was $173 million less than the first quarter of 2020.

“Although collections remain down compared to last year, there are signs of improvement as the state continues to recover from the economic devastation caused by the COVID-19 pandemic,” DiNapoli said. “Local officials are cautioned to monitor their budgets closely because the pandemic’s trajectory and its effect on our state’s fiscal recovery remain uncertain.”

This is the fourth quarter in a row that overall collections have dropped statewide year-over-year. From April 2020 through March 2021, statewide local collections are down by 11.8 percent or $2.2 billion.

Despite the first-quarter decline, collections have shown a gradual improvement over the past three quarters, especially compared with the 27.1 percent decline seen from April to June 2020, when many businesses were shut down during the first wave of the COVID-19 pandemic and many people stayed home to avoid infection.

Sales tax collections in New York City during the first three months of 2021 were down 13.2 percent from the same period in 2020, which was still better than the previous three quarters.

Outside of New York City, all but two counties — Albany and Schuyler — experienced an increase in collections in the first quarter of 2021 compared to the same three-month period in 2020. 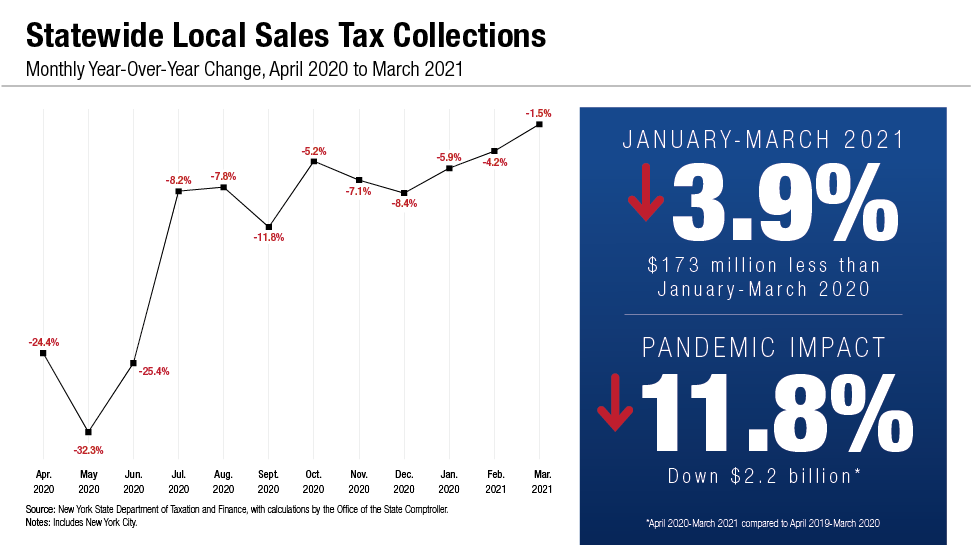