More Than 67,000 Complaints to Federal Trade Commission, Up 85 Percent From Previous Year

Identity thefts in New York surged during the pandemic with more than 67,000 complaints filed statewide in 2020, which was 85 percent more than the previous year and more than four times the annual total from a decade earlier, according to a report released today by New York State Comptroller Thomas P. DiNapoli.

The New York City metropolitan area had the highest rate of identity theft reports to the Federal Trade Commission (FTC) per capita at 403 reports per 100,000 people, followed by Poughkeepsie-Newburgh-Middletown (315) and Rochester (303) metropolitan areas. 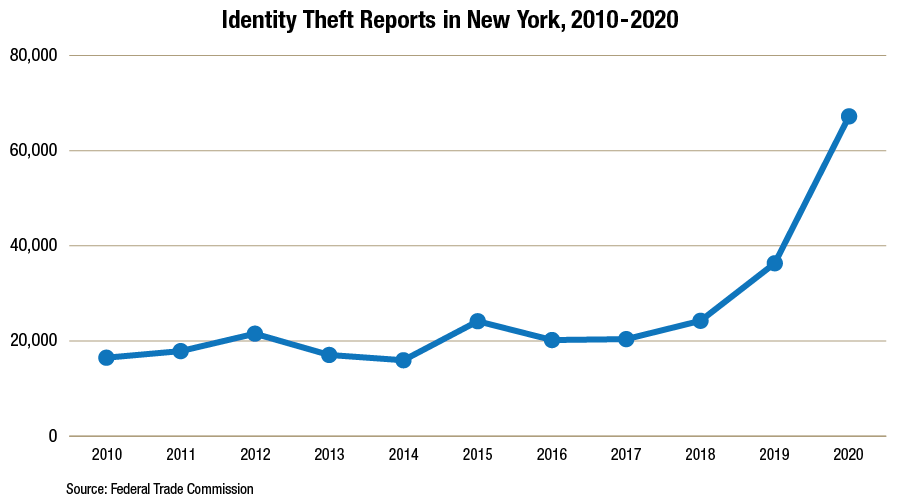 “In the midst of the stresses caused by the pandemic, many New Yorkers also dealt with identity theft last year,” said DiNapoli. “Even when there’s no money stolen, resolving the consequences of stolen personal information is complicated and can take months of effort. Often the pain is really felt later, when victims have trouble getting a job, renting an apartment, or getting a loan because their identity was stolen. We should all take common-sense steps to keep personal information confidential, and companies must do more to protect consumers from identity theft.”

Credit card fraud was the most common type of identity theft reported to the FTC in 2020, with nearly 25,000 New Yorkers reporting someone misused their information on an existing credit card account or to open a new account. More than 3,600 identity theft reports related to COVID-19 were reported in the state, with two-thirds connected to unemployment benefits or other government programs, according to the FTC.

Identity thieves also stole individuals’ personal information to get prescription drugs, obtain medical services or medical insurance coverage and for a variety of other purposes.

Nationwide, reported losses from identity theft totaled $15.1 billion in 2018. The U.S. Department of Justice’s data does not break down losses to identity theft by state, but losses by New York residents would be more than $800 million if they are similar to its share of identity theft reports to the FTC that year (about 5 percent).

The COVID-19 era has been marked by new varieties of financial fraud, including new identity theft scams. Although the full impact of the pandemic on the problem is not yet known, New Yorkers should be aware of potential scams and guard against them.

The FTC has compiled identity theft complaints related to COVID-19 for 2020 through mid-March 2021, reporting 3,617 in New York. Of the state’s identity theft reports, about two-thirds (2,375) were related to information misused to try and get a government document or benefits such as economic relief checks or unemployment insurance.

According to the FTC, imposters are filing claims for unemployment benefits using the names and personal information of people who have not filed claims. People learn about the fraud when they get a notice from the state unemployment benefits office or their employer about their supposed application for benefits. As of late April 2021, the state Department of Labor (DOL) said it had identified over 1.1 million fraudulent unemployment benefit claims during the COVID-19 pandemic, preventing more than $12.3 billion in stolen benefits.

DiNapoli’s office began an audit of the DOL in February. His office first conducted an assessment of the risk of potential identity theft fraud since the beginning of the pandemic, which included looking at complaints, large increases in payments, new programs and criteria, and changes to the internet technology. This assessment found numerous red flags that led DiNapoli’s office to launch a full audit.

Identity thieves have also attempted to leverage news of government COVID-related stimulus payments by posing as someone from an official organization and asking for personal or financial information. They have also tried to exploit pandemic fears by asking victims to pay out of pocket to get a COVID-19 vaccine or to put their name on a vaccine waiting list and, in the process, take their Social Security, bank account or credit card information.

Private businesses that collect and maintain personal information must redouble their efforts to safeguard such data, DiNapoli said. He called on social media companies to promote best practices and proactively educate users about ways to keep private information confidential.

DiNapoli recommends the following actions, among others, to help prevent becoming a victim of identity theft: