New York State Comptroller Thomas P. DiNapoli today warned retirees not to be fooled if they received text messages or other communications that purport to come from the state’s retirement fund and the Office of the State Comptroller, asking for a payment to “upgrade” the retirement fund. It’s a scam. Report the message to the Federal Bureau of Investigation’s Internet Crime Complaint Center at www.ic3.gov or by calling the Albany FBI Field Office at 518-465-7551 or 1-800-CALLFBI.

“I want to be very clear to our system’s retirees and members — these are phony messages from scammers trying to steal your money,” DiNapoli said. “The fund has not, and does not, send out any electronic messages asking for payment for upgrades. Don’t be fooled. Protect yourself by not responding and by reporting these messages to law enforcement if you get one.”

The sham messages attempt to trick recipients into making a payment for “an upgrade” in exchange for reduced taxes, additional money added to their funds and other benefits.

A screen capture of a scam text: 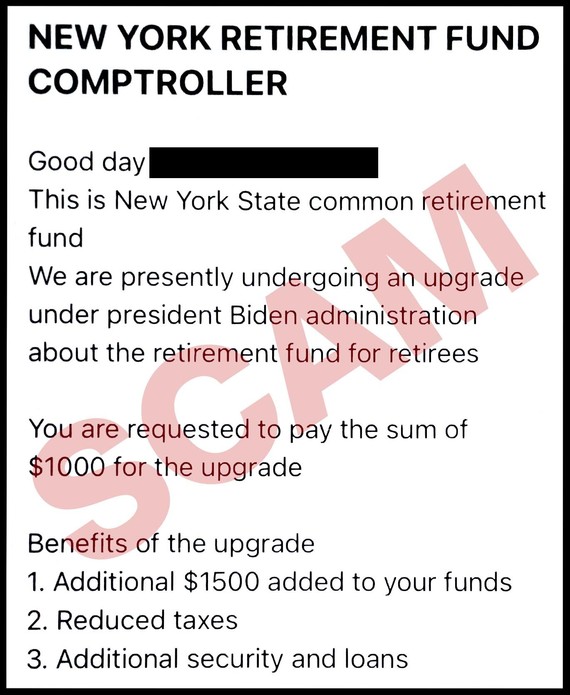 New Yorkers can report allegations of fraud involving the retirement system or taxpayer money by calling the Comptroller’s toll-free Fraud Hotline at 1-888-672-4555, by filing a complaint online at [email protected], or by mailing a complaint to: Office of the State Comptroller, Division of Investigations, 8th Floor, 110 State St., Albany, NY 12236.

The New York State Common Retirement Fund is the third largest public pension fund in the United States with estimated assets of $254.8 billion as of March 31, 2021. The Fund holds and invests the assets of the New York State and Local Retirement System on behalf of more than one million state and local government employees and retirees and their beneficiaries. The Fund has consistently been ranked as one of the best managed and best funded plans in the nation. The Fund's fiscal year ends March 31.