Sales tax revenue for local governments in New York state rose by 49.2% in the second quarter (April to June 2021) compared to the same period last year, a dramatic increase from last year’s weak collections during the first wave of the COVID-19 pandemic, according to State Comptroller Thomas P. DiNapoli. Sales tax collections during this period grew by just over $1.6 billion and even surpassed collections reported during the second quarter of 2019, before the onset of the pandemic.

“The strength of these collections, along with federal aid, will give local governments statewide the chance to improve their fiscal stability, but it will take time to recover from the strain caused by the COVID-19 pandemic,” said DiNapoli. “While this is good news, local leaders are advised to budget carefully. If this pandemic has taught us anything, it’s to always plan for unpredictable circumstances.”

The size of the increase largely reflects extremely weak collections in the April to June period of 2020. However, even compared to pre-pandemic collections for the same period in 2019, statewide collections in 2021 were up 8.7% or $396 million. Every region outside of New York City experienced two-year growth over 18%. The Mid-Hudson and North Country regions both reported increases of more than 29%. 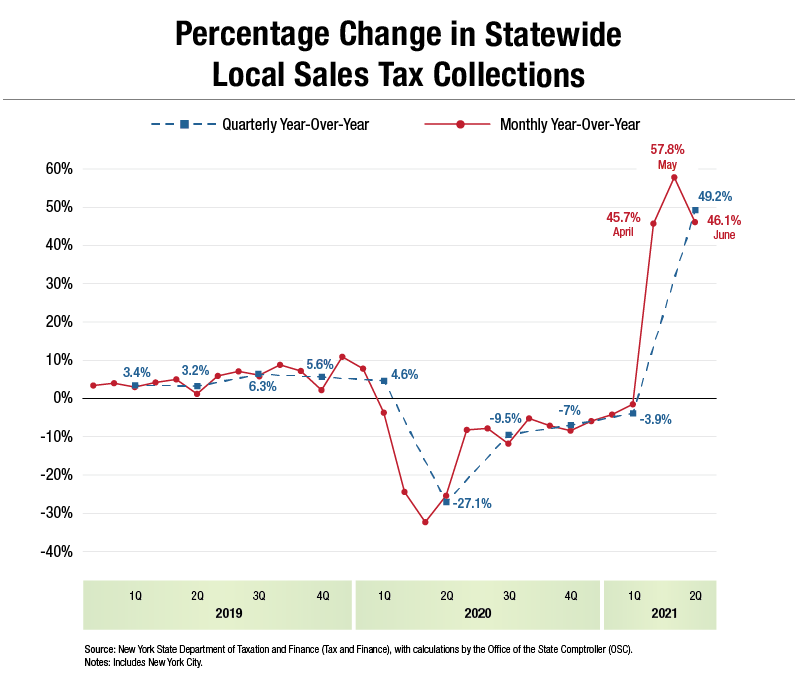 New York City’s collections grew by 44.6% in the second quarter of 2021— the first increase after four quarters of year-over-year declines, but its total collections have yet to return to pre-pandemic levels. The city was hit earliest and hardest by the pandemic and was slower to reopen than the rest of the state, much of which had begun to see increasing sales tax collections starting as soon as the third quarter of 2020.

Year-to-date, statewide local collections in 2021 are up 18.8%, or nearly $1.5 billion, over the first six months of 2020. Such results, where nearly every region in the state saw a surge in collections, may reflect a combination of pent-up consumer demand, along with purchases tied to recent spikes in home sales.

In addition, two major changes that required many out-of-state vendors to collect and remit state and local sales taxes may have prevented steeper declines. The first change occurred after June 2018, when the U.S. Supreme Court’s ruling in South Dakota v. Wayfair established the economic nexus policy, expanding the group of vendors required to collect sales tax. The second change, the marketplace provision, now requires online marketplace providers, such as eBay and Etsy, to collect and remit sales taxes on behalf of their third-party vendors effective June 2019.

The first full “sales tax year” during which both the economic nexus policy and the marketplace provision were in effect was March 2020 through February 2021. During that period, the vendors subject to these changes reported $16.2 billion in total sales to New Yorkers, generating an estimated $686 million in sales tax revenue. Of that total, $431 million was generated by sales outside of New York City and $255 million by sales inside the city. Both far exceeded the state’s original estimates. The better-than-expected outcome during this period was likely due, in part, to how the pandemic influenced consumer behavior by reducing in-person purchases and increasing online shopping.

Regionally, the percentage of taxable sales from marketplace and nexus vendors varied by county, as did the effect of pandemic-related changes in consumer behavior. In general, less densely populated counties, such as Allegany, Oswego, and Washington, had relatively high percentages of revenue from online vendors, as did Putnam County. Such counties likely benefited from the combination of more online shopping during the pandemic with the state’s ability to capture taxes from a wider array of online sales.

In New York City the percentage of revenue generated by marketplace and nexus vendors was 4.5%, below the 5.4% average for counties in the rest of the state in the March-May sales tax quarter of 2020-21.