DiNapoli: Over One Million New Yorker Households Are Not Connected to Broadband

The state has made progress in making high-speed connections available to New Yorkers, ranking second in the U.S. in the percentage of the population with broadband available in their neighborhood, but more than one million, or 13.8%, of households do not have access or a subscription to home broadband services, according to a report released today by State Comptroller Thomas P. DiNapoli.

“Reliable, high-speed internet is a necessity to effectively work, communicate and learn in our society and that was made crystal clear during the COVID-19 pandemic when millions of New Yorkers turned their homes into schools and workplaces,” said DiNapoli. “The state has taken significant steps to make broadband available to most New Yorkers, but there is still a digital divide in rural parts of New York and for low-income New Yorkers who don’t have access or are unable to afford a home subscription. High-speed connections are an imperative for economic development and equal opportunity.”

DiNapoli’s analysis finds many predominantly rural areas remain underserved by broadband infrastructure. In addition, approximately 1 in 3 New York households with income less than $20,000 lacked access to broadband at home. As of 2019, the greatest share of households lacking access was in New York City. 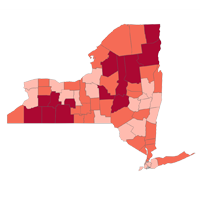 View a map of New York State that breaks down the percentage of population without broadband available by county.

Only a limited number of households had higher-speed subscriptions that were essential during the pandemic, as stay-at-home orders led to sharply increased amounts of data transmitted simultaneously. While 86.2% of New York households had access to broadband at speeds of at least 25/3 megabits per second (Mbps), only 13.5% of those had home broadband subscriptions at faster speeds of at least 250/25 Mbps in 2019.

Some households upgraded their subscriptions to accommodate increased demands within their homes during the pandemic; however, other New Yorkers may not have had that option due to a lack of availability of higher-speed connections or affordability concerns. While the pandemic highlighted these disparities, enhancing broadband is important not only for equity but also for long-term economic competitiveness.

DiNapoli urged the state to craft a detailed strategy that can leverage federal funding provided under the American Rescue Plan and new funds that may be provided under the infrastructure bill currently before Congress. He said the plan should:

"Comptroller DiNapoli’s report makes clear that too many New Yorkers are going without quality, affordable internet access, and we are especially lacking true competition in the marketplace," said Rep. Antonio Delgado (D-19th Congressional District). "The American Rescue Plan was a broadband down payment. Now Congress must pass an infrastructure package to ensure all upstate residents have affordable and accessible internet. I will keep fighting until we get this done."

“I want to thank Comptroller Tom DiNapoli and his team for conducting this comprehensive report on the status of broadband in New York state and for an audit I called for back in 2019, prior to the COVID-19 shutdown, where it became clear to every New Yorker just how essential adequate broadband access is to live, learn, work or stay healthy,” said Assemblymember Didi Barrett (D-Dutchess/Columbia counties). “The findings confirm much of what many of us here in the Hudson Valley already knew: far too many of our neighbors lack access to the broadband needed to function, let alone flourish, in the 21st century. Availability is not the same as access and it is clear that we still have a long way to go to ensure that every New Yorker, regardless of where they live, has access to reliable and affordable internet service.”

“The ongoing pandemic has underscored the deep importance of reliable and equitable internet access in our communities,” said Hudson Mayor Kamal Johnson. “This new and detailed report from Comptroller DiNapoli’s office offers valuable insights for us all into how we can continue to improve local broadband availability.”

“The acceleration of universal availability of the highest-speed connections statewide, especially in rural communities, along with enhanced broadband access for low-income households and improved affordability, are all smart goals worthy of strong bipartisan support at the local, state, and federal levels. Without question, New York must make it easier and more affordable for broadband providers to expand. I’m proud to be part of this important effort and thank State Comptroller DiNapoli for this comprehensive report,” State Sen. Daphne Jordan (R,C,I-Halfmoon) said.

New York has done well in deploying broadband infrastructure at the standard speed of 25/3 Mbps. In 2019, the state ranked second in the country with 98.7% of the population in areas with broadband compared to a national average of 95.6%, according to the FCC. At least one provider offering high-speed broadband of at least 250/25 Mbps speeds was available to 98.3% of New York’s population; however, provider competition is lacking, which may make consumer costs higher.

The report noted that the FCC considers an area “served” if a service provider reports that it has made broadband infrastructure available to a particular census block, even if service is not necessarily available to every location on that block. As a result, these figures may overstate broadband availability, but remain the best data available on infrastructure deployment.

The state’s deployment of broadband infrastructure has reduced the number of New Yorkers without broadband available from a reported 518,000 to 253,000 people between 2013 and 2019.

While broadband availability indicates a geographic area has been wired for that service, access to broadband indicates that a household has a subscription for services, including cellular service. In New York, the gap between availability and access was significant: while about 253,000 people did not have broadband available in their neighborhoods, over 1 million households, or 13.8%, did not have access or a subscription as of 2019. Almost half of all households without broadband access were in New York City.