With Billions in Federal Aid on the Way, Local Governments Have Opportunity to Make Critical Improvements to Local Infrastructure

Local governments across New York State spent $2 billion on road maintenance, repairs and upgrades in local fiscal year (FY) 2020, a decline of 7% since 2010 when adjusted for inflation, according to a report by New York State Comptroller Thomas P. DiNapoli. Some local communities put road projects on hold during the pandemic, but an influx of federal money is expected to jump start projects at the same time the Executive is proposing more funding for road repair and improvements.

Local governments own 85% of all roads in the state, from city, town and village streets to major county highways. The remaining 15% are mostly state and federal highways. The study focuses on areas outside New York City. DiNapoli urged state and local officials to work together to prioritize projects and do a comprehensive assessment of local road conditions since the last study was from 2013.

“Local roads are the lifeblood of our communities, but when they are in poor condition, under construction, or being repaired they can limit our access to schools, businesses, and loved ones,” said DiNapoli. “The state is expected to receive $13.5 billion over five years for highway and bridge programs through the federal Infrastructure Investment and Jobs Act. I’m pleased the Executive is taking advantage of this unprecedented influx of aid, which should allow us to make significant progress in prioritizing local road projects and modernizing the infrastructure in our communities.”

Local spending, excluding New York City, for all road-related purposes increased by 11% between FY 2010 and FY 2020, an annual rate of 1%, lower than the average inflation rate of 1.7% over the same period. Adjusted for inflation, spending declined 7% over the ten-year period.

Road-related spending declined by 7% between FY 2019 and FY 2020, with spending down for all classes of government except villages. Health restrictions and budget effects due to the COVID-19 pandemic may have been a factor, as local governments reduced spending or limited operations. This followed an unusually large increase of 8% in FY 2019, over half of which took place in five municipalities: Erie and Nassau counties, the City of Port Jervis, and the towns of Hempstead and Oyster Bay.

Local governments outside of New York City spent $2 billion in FY 2020 for road and highway maintenance and capital improvements, with towns leading the way at $771 million, followed closely by counties ($707 million). Villages spent the most per lane-mile of road at $22,100. More densely populated suburban, downstate counties had the highest total road spending by all local governments when measured by per lane-mile, while more rural upstate counties had the lowest. Westchester County had the highest overall in FY 2020 at $25,944, followed by Rockland County and Nassau County, with each spending over $24,000 per lane-mile. Lewis County in the North Country spent the least at $3,169. 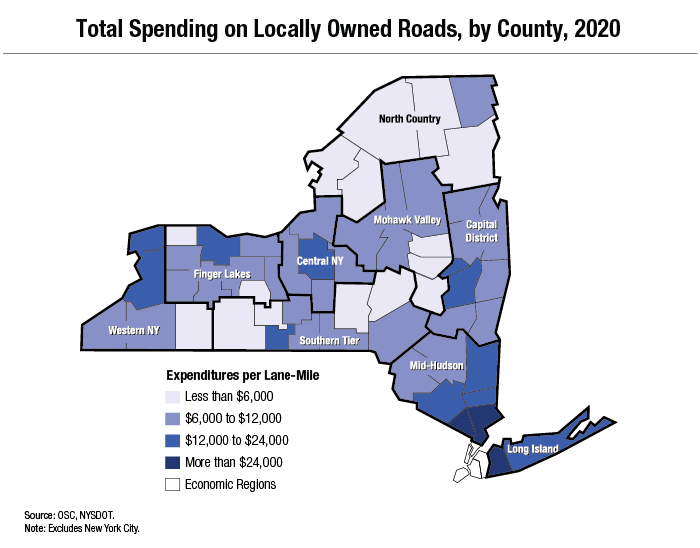 Local government spending on roads also varies by region when considering measures of the tax capacity of local government and population. Downstate, where property values are generally higher, spending compared to full property value is lower, while upstate is higher. On Long Island, local road spending was $0.75 per $1,000 of the full value of property in 2020, while the Southern Tier ranked highest at $3.85 per $1,000. Per capita spending was the lowest on Long Island at $151 and highest in the Southern Tier at $257.

Local governments receive transportation aid from the state and federal government for roads and certain other transportation infrastructure, and both can fluctuate. State aid is provided through several programs, most notably the Consolidated Local Street and Highway Improvement Program (CHIPS). In State Fiscal Year (SFY) 2021-22, CHIPS funding for local governments, including New York City, was increased from the annual amount of $438 million, a level previously unchanged since 2013, to $538 million.

Of the $13.5 billion expected from the federal Infrastructure Investment and Jobs Act for formula-funded state and local highway and bridge programs (including New York City), $4.1 billion represents new funding, including $1.7 billion for existing highway programs and $551 million for new highway programs. An additional $1.9 billion is anticipated for bridges.

The most recent comprehensive assessment of New York’s local funding needs for roads is a 2013 study from the New York State Association of Town Superintendents of Highways, which found that locally owned roads would need around $32 billion over 15 years. The state Department of Transportation maintains current data on state and federal highway conditions, as well as a relatively small subset of locally owned roads, but there is no comprehensive data on local road conditions. This information is critical to determine the level of local spending needed to maintain roads in safe and adequate condition.

DiNapoli said efforts by the state, working with local governments, to improve the availability and quality of data on local road conditions, maintenance needs, and associated costs, could improve the prioritization of projects and help ensure the best use of these critical resources. This would be especially beneficial with the state and its local governments set to receive several billions of dollars in additional resources for road and bridge maintenance and improvements in the years ahead.