Although the state Division of the Budget (DOB) forecasts in the State Fiscal Year (SFY) 2022-23 Executive Budget that the budget will remain in balance for the next five years, the direction of the pandemic, inflation, and supply chain issues all remain risks to the state’s economic recovery and financial plan, according to a review by New York State Comptroller Thomas P. DiNapoli. The budget also proposes billions of dollars in spending that would bypass critical oversight if enacted.

“Thanks to an unprecedented amount of federal aid as well as tax collections that are more than $10 billion higher than initially expected, New York is on solid fiscal footing,” DiNapoli said. “However, the pandemic’s continued uncertainty makes forecasting economic performance difficult. Policymakers should keep an eye on the years ahead when temporary federal funding will end and build up the state’s reserves, so we are better prepared for future emergencies or an economic downturn.” 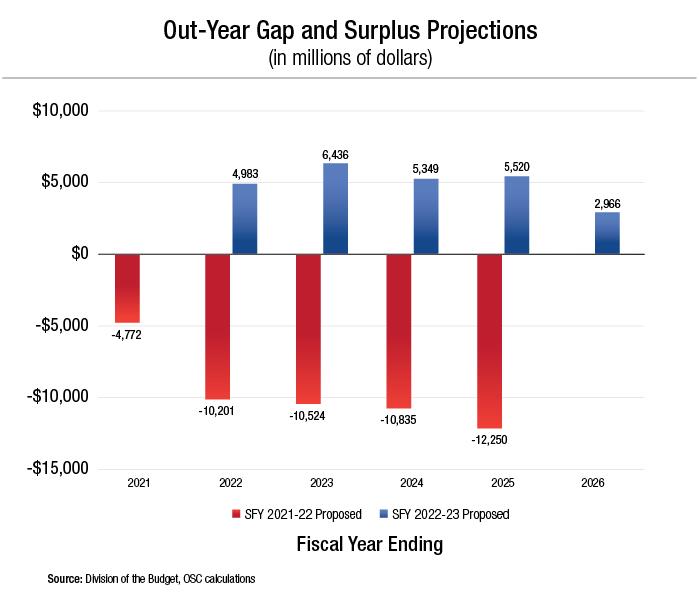 The predominant risk for the financial plan forecast is the uncertainty of the pandemic. The duration of the Omicron variant and the potential rise of new ones could prolong restrictions, resulting in stunted growth in the state and national economies. Continued disruptions in supply chains or uncontrolled price increases are also risks. Higher inflation would reduce spending power, resulting in lower consumer spending.

New York’s job recovery has been slow and there are fewer workers in the labor force. DiNapoli noted DOB’s forecast of a return to pre-pandemic employment levels in 2024 is more optimistic than others, including IHS Markit’s forecast, which projects the full recovery occurring in 2027.

Several appropriations and Article VII provisions in the Executive Budget would eliminate the State Comptroller’s oversight and waive State Finance Law competitive bidding procedures for state contracts. This includes at least $10 billion in COVID-19 and emergency-related appropriations and reappropriations.

In addition, some of the $10 billion multi-year funding for healthcare is proposed without sufficient oversight and accountability, including $1.6 billion in capital grants. The budget also eliminates the Comptroller’s contract oversight and State Finance Law competitive bidding requirements for Medicaid managed care contracts.

DiNapoli has long cited the inadequate levels of state reserve funds as a significant fiscal concern. At the end of SFY 2020-21, the reserves totaled just under $2.5 billion. In the Mid-Year Update, the Executive proposed increasing reserves to 15% of spending from State Operating Funds. The Executive Budget now proposes to set aside $11.8 billion as informal reserves, as well as planned deposits to the two rainy day funds through SFY 2024-25, which would increase reserve funds to a total of $19.4 billion in that year. In SFY 2022-23, $5.1 billion would be set aside for reserves, but only $920 million or 18% would be to restricted reserves, despite an allowed maximum of $7 billion.

While the proposed increase in reserve funds would reflect good progress towards better preparing the state for the next inevitable downturn, the proposal disproportionately uses unrestricted reserves. These funds could be obligated and spent at any time, at DOB’s discretion, for any appropriated purpose. As a result, these informal, unrestricted reserves do not have the same stabilizing value as formal, statutorily restricted reserves.

The proposed $92 billion, five-year capital plan reflects an increase of $14.7 billion (19% higher than the current capital plan) and includes new capital investments in transportation, housing, healthcare and environmental infrastructure, some made possible by the federal Infrastructure Investment and Jobs Act.

Over the proposed five-year plan, total state-supported debt grows from $62.9 billion in SFY 2021-22 to $88.1 billion in SFY 2026-27, an increase of $25.3 billion (40%), and available debt capacity declines to less than $300 million in SFY 2025-26, despite excluding debt issued over the last two years from the state’s debt cap. The budget also proposes $2.35 billion outside of the debt limit to repay a federal loan for the Gateway project.

All Funds tax receipts that were initially expected to increase 10.6% in the current fiscal year have grown by 31.2% year-to-date, excluding Pass-Through Entity Tax collections that are expected to be revenue neutral over the financial plan period. DOB estimates All Funds receipts in the current year will total $243.4 billion, an increase of 27.2%, or $52.1 billion, from SFY 2020-21. The increase is primarily attributable to federal relief aid, as well as the return of economic growth over the past year and the impact from various revenue increases in the SFY 2021-22 Enacted Budget, including the personal income tax surcharge on high-income earners, increased corporate franchise tax rates, the creation of a new pass-through entity tax and the authorization for mobile sports betting.

The Executive Budget includes revenue actions that are projected to produce net decreases in All Funds revenues of $2.4 billion in SFY 2022-23 and $900 million in SFY 2023-24. The most significant are the proposed acceleration of the middle-class tax rate reductions and the proposed Homeowner Tax Rebate credit for low- and middle-class homeowners.

Spending from All Funds is projected by DOB to total $216.3 billion in SFY 2022-23, representing an increase of 1.6% from the current fiscal year. All Funds Medicaid spending, reflecting state and federal expenditures, is expected to total $83.8 billion in SFY 2022-23, an increase of $8 billion or 10.5% over the current year. This growth reflects multiple factors, including proposed wage increases and bonuses, additional funding for nursing homes to address pandemic-related impacts, implementing minimum staffing requirements, and Medicaid enrollment that DOB projects will peak at 7.7 million in SFY 2022-23 before returning to near pre-pandemic levels by SFY 2023-24.

The Executive Budget also proposes $31.2 billion in total school aid for school year (SY) 2022-23, an increase of $2.1 billion from SY 2021-22. Foundation aid would increase by $1.6 billion, or 8.1%, from current SY levels, reflecting the second year of the three-year phase-in of full funding of the current Foundation aid formula.