An analysis of state personal income tax (PIT) filers from 2015 through 2019 reveals New York state resident taxpayers grew at a slower rate than nonresident filers, 3.1% compared to 13.6%, resulting, in part, from the greater number of part-year filers moving out of the state than moving in, according to a new report by New York State Comptroller Thomas P. DiNapoli. The report is based on the most recent data available. The Comptroller’s Office will continue to monitor the trends as the data is updated. Policymakers can utilize this data as a resource for evaluating the impacts of changing economic conditions and state policy actions.

The average annual net out-migration of part-year taxpayers between 2015 and 2019 was approximately 28,700, or 0.3% of resident taxpayers. Married filers left New York at twice the rate (0.66%) of all filers, with married filers making between $100,000 and $500,000 per year comprising the largest numbers of departures.

“The personal income tax is the single largest state revenue source for New York, accounting for two of every three tax dollars,” DiNapoli said. “New York’s fiscal health is linked to attracting and retaining taxpayers. Monitoring trends is critical and further analysis of migration trends during and after the pandemic will be needed. Expanding economic opportunities and making quality of life investments will strengthen our tax base and ensure the state can pay for critical public services."

In 2019, the most recent year of available data, there were 10.9 million state filers, 87% of which were full-time residents taxed on all income received and responsible for 83% of 2019 PIT collected. Part-year resident taxpayers, which accounted for 3% of New York’s PIT filers in 2019, reflect the movement of taxpayers into and out of the state in a single year.

Nonresidents comprised 10% of filers but were responsible for 15% of the PIT collected in 2019. Nonresident filers are taxpayers who move out of New York but must file state income taxes because they still receive income from New York sources. However, this income is typically a small portion of the nonresident’s total income. Nearly half of all PIT taxpayers with incomes of $1 million or more were nonresidents.

The net movements of part-year taxpayers can impact collections over time as they transition to either full-time residents or nonresidents. The report found a consistently greater number of part-year filers moved out of New York than moved in between 2015 and 2019. While part-year filers represent a small share (3%) of total PIT filers, examining their characteristics can provide insight into the mobility of taxpayers, and, by extension, the economic competitiveness of New York State. 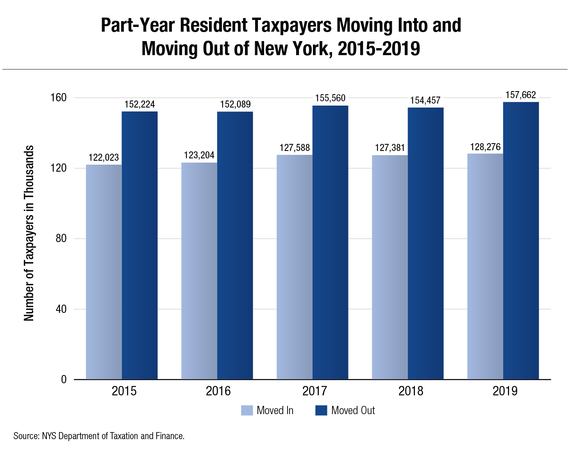 Impact on Composition of Taxpayers

With a larger net out-migration, over one in eight families paying PIT were nonresidents in 2019, higher than 2015 when it was one in nine families. While some part-year resident taxpayers who leave the state still receive income from New York entities, most exit the tax base entirely.

In 2019, of the more than 157,000 part-year resident taxpayers that moved out of New York, nearly 46,000 retained New York source income after they left, potentially transitioning to nonresident personal income taxpayers in 2020. However, the portion of nonresident filers’ income that is captured is relatively small, with taxes imposed on an average of 20.6% of these taxpayers’ total income in 2019.