Audit Finds Agency Needs to Step Up Inspections and Enforcement to Ensure Workers are Protected and that Contractors, Building Owners Follow Building Code

The New York City Department of Buildings (DOB) is not doing enough to protect construction workers on building sites, according to an audit released by New York State Comptroller Thomas P. DiNapoli. The audit found DOB needs to be more aggressive in its oversight, inspections and use of enforcement powers to make sure violations are corrected to help prevent construction-related accidents, injuries and fatalities.

“Construction is key to New York City’s economy, but as the sector recovers from the COVID pandemic, the Department of Buildings needs to do more to prioritize workers’ safety,” DiNapoli said. “The agency has the obligation to make sure that contractors and building owners address safety and building code issues timely. It should make the necessary changes to increase its oversight and enforcement to help boost workplace safety.”

DiNapoli’s audit found DOB’s monitoring of construction sites was inadequate and did not ensure contractors and building owners followed the Building Code’s safety requirements. Auditors visited 43 constructions sites in all five boroughs, of which 18 had active work in progress at the time. They found 77 safety issues at 16 of the 18, including no site safety manager, missing or incomplete safety logs and inspection records, and no proof that workers were given required safety training.

DOB had issued summonses for unsafe conditions that appeared to mirror what auditors found at some sites, indicating that the agency’s enforcement was not successful in getting contractors or owners to comply with the Building Code.

DOB has different levels of violations that it can issue based on the severity of the hazard. For example, the most serious — Class 1 Office of Administrative Trials and Hearings (OATH) Summonses — are for violations that present an immediate hazard to life, health, safety or property. Class 1 violations are supposed to be fixed immediately with a Certificate of Correction sent to DOB. Auditors found the vast majority of Class 1 violations were still open 30 days after they were issued, giving DOB no assurance the hazard was addressed. 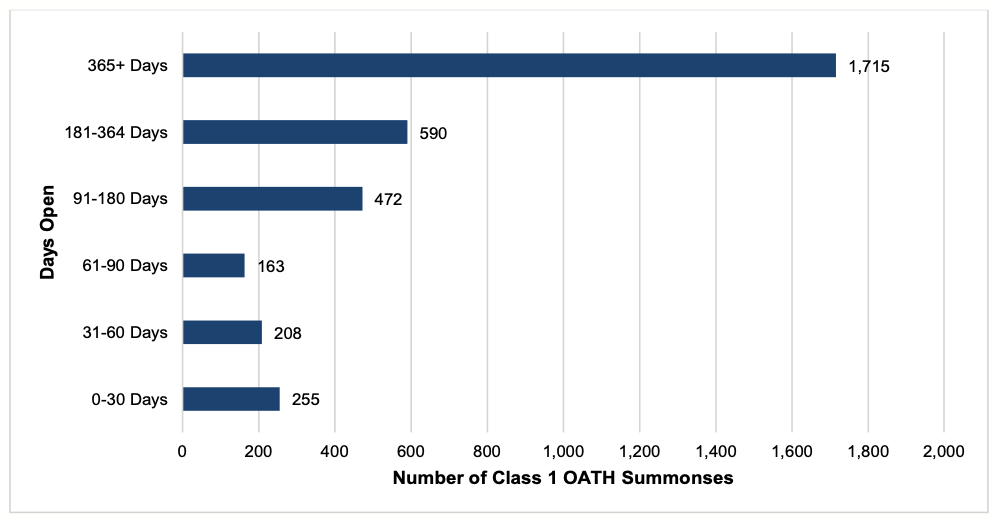 If a contractor or building owner fails to certify they fixed a violation, DOB can issue a violation for failing to fix the problem and potentially a Stop Work Order. However, DOB did not often issue such violations.

Of the 24,451 Class 1 Summons, 18,072 were open for 30 days or more, but the majority (60%) had not been given a violation for failure to show the hazard was fixed. Auditors chose 30 days as a benchmark for addressing immediate hazards because DOB does not officially define how quickly these hazards have to be corrected. City rules only state that proof of correction must be submitted “forthwith” — without delay. DOB doesn’t define “forthwith” and officials said they wait 80 to 94 days before issuing violations for failure to correct a Class 1 problem. DOB also has no policy on when to issue violations for failure to correct less urgent Class 2 and Class 3 safety hazards.

Failure to enact safeguards and safety training and ensure enforcement actions result in improved safety can lead to injuries and death, the audit notes. For example:

DOB also does not do enough to identify sites with chronic safety issues for inspections. Officials said they examine permit sites that were required to have a safety manager, or other precautionary measure, but could not describe how they prioritize inspections. Of 2,003 incidents between Jan. 1, 2018 and May 15, 2021, 278 (14%) happened at just 20 sites, accounting for 280 injuries and two fatalities. And five of those sites combined for 94 incidents, resulting in 93 injuries and one fatality. Also, five contractors were responsible for construction work at sites where 13% of the incidents happened. DOB did not use this information to prioritize inspections.

Among its recommendations, DiNapoli’s audit called on DOB to:

DOB officials agreed with most of the report’s recommendations and indicated actions they have taken or will take to implement them, but they disagreed with some of its conclusions. The agency’s full response is available in the audit.