The economic outlook contained in the Governor’s Executive Budget proposal for State Fiscal Year 2021-22, released this week, anticipates continuing but slow improvement for employment and other economic indicators, as well as tax revenues. Real U.S. gross domestic product is projected to increase by 4.4 percent in calendar year 2021 after an estimated decline of 3.4 percent in 2020, according to the Division of the Budget (DOB). While the State has regained close to half of the 1.9 million jobs lost in March and April of 2020, a return to pre-pandemic employment levels is not expected until 2025.

“The COVID-19 pandemic’s damaging effects on labor markets are still mounting and will be a major obstacle to a balanced economic recovery,” according to the Executive Budget Financial Plan. After a decline of 5.7 percent in 2020, U.S. employment is projected to increase by 2.7 percent in 2021 and reach its pre-pandemic level in early 2023, according to DOB.

Key aspects of the Executive Budget Financial Plan are discussed in the New York State Budget and Spending section of this update below.

More than 2.8 million adult New Yorkers found it “very difficult” to pay normal household expenses in mid-December, the highest number of any period analyzed in the surveys that began in August 2020, according to U.S. Census Bureau data. For another 2.8 million, paying such expenses was “somewhat difficult.” The combined total, more than 5.6 million or 40 percent of adults, was the 10th-highest proportion among all states. The Census data do not reflect the number of dependent children living in such households.

In its survey period ending August 31, the Census Bureau found that 1.8 million adult New Yorkers were facing “very difficult” challenges paying normal household expenses. Including those in the “somewhat difficult” category brought the total at that time to 4.5 million, or 33 percent of adults. With some fluctuations, that proportion rose in succeeding months, despite growth in overall economic activity from the second to the third quarter of 2020. In each of the six surveys from October through December, the combined total of the “very difficult” and “somewhat difficult” counts in New York was more than 5 million.

The interactive map above shows the percentage of adults in each state aged 18 and over for whom paying household expenses was very difficult or somewhat difficult during each of the Census Bureau’s Household Pulse Survey periods from late August to mid-December.

From March 1, 2020, through January 15, 2021, the Office of the State Comptroller has approved nearly $61.9 billion in unemployment insurance (UI) payments, which have provided badly needed support to individuals and families across the State who are struggling to cope with the economic impact of the COVID-19 pandemic. That figure compares to just $2.1 billion during calendar year 2019.

But the flow of UI benefits has slowed in recent months. As shown in the table below, total UI payments approved declined noticeably in the final three months of 2020, reaching the lowest levels since March, when the pandemic was just starting to hit New York. 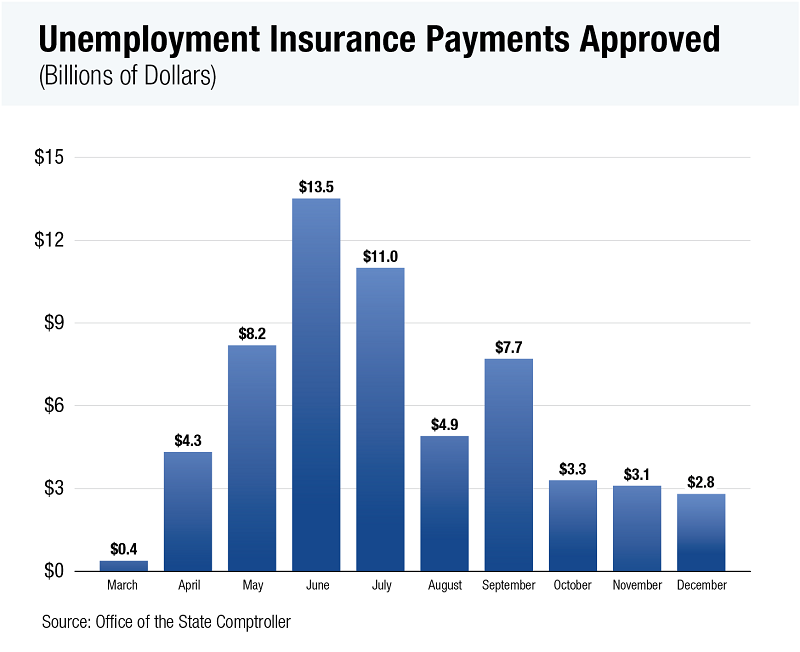 This decline does not reflect dramatic improvement in the economy. The number of New Yorkers with jobs plunged by 1.5 million in March and April. As of November, the count was still down by more than 820,000 from February’s level — one indication that recovery has been only partial.

Extraordinary unemployment benefits funded by the federal government as part of broader economic stimulus efforts delivered billions of dollars on top of the traditional state-federal UI program. Those temporary programs covered only certain periods, contributing to the decline in overall UI payments in the last months of 2020. For example, separate programs that provided $600 or $300 in additional weekly benefits for recipients had ended by early September. However, the latest federal stimulus legislation enacted in December provided a new program of $300 per week in additional benefits from early January to mid-March. President Biden has proposed further extension of the federally funded UI benefits. As of late December and early January, 2.3 million New Yorkers were collecting benefits from either the federally funded programs or the traditional UI program.

The Governor’s proposed Executive Budget projects total spending in the current fiscal year at $192.7 billion, up 11.4 percent from the previous year, reflecting an increase of $17.8 billion or 30.2 percent in spending from federal operating aid. For the fiscal year starting April 1, total spending is projected at $192.9 billion, up by just 0.1 percent. Other key fiscal elements of the proposed Budget include:

New York City and counties across the State will benefit from reduced monthly Medicaid costs as a result of enhanced federal Medicaid funding. Due to federal stimulus and relief legislation enacted in 2020, along with declaration of a federal public health emergency, the State is receiving more than $3 billion in additional federal funding to offset State Medicaid costs. In addition to those savings for the State, New York City’s Medicaid costs are expected to be reduced by $500 million. For all other counties, savings are expected to total at least $300 million.