While all states have lost employment since the COVID-19 pandemic struck earlier this year, New York surpasses almost every other in both number and percentage of job losses. From February through August 2020, the Empire State ranks second to Hawaii in percentage of employment decline and second only to California in the total number (see map below). During that same period, unemployment in the State rose from 3.7 percent to 12.5 percent, based on preliminary estimates.

Employment in New York increased from May through August. However, those gains, over 686,000 jobs, represented only 35 percent of the record-breaking loss of 1.9 million in March and April. As the Office of the State Comptroller has reported previously, New York’s job losses are concentrated in lower-paid sectors of the economy.

The employment impact on New York and other indicators, including figures on overall economic activity outlined below, continue to support the case for significant additional federal aid in response to the pandemic and the associated recession.

Overall economic activity in New York, as measured by real gross domestic product (GDP), declined steeply in the second quarter of 2020, according to data from the U.S. Bureau of Economic Analysis (BEA). Total GDP in the State fell by 36.3 percent, on a seasonally adjusted annual basis, 5 percentage points worse than the national figure. The decline was more pronounced in private sector industries, at 38.1 percent. 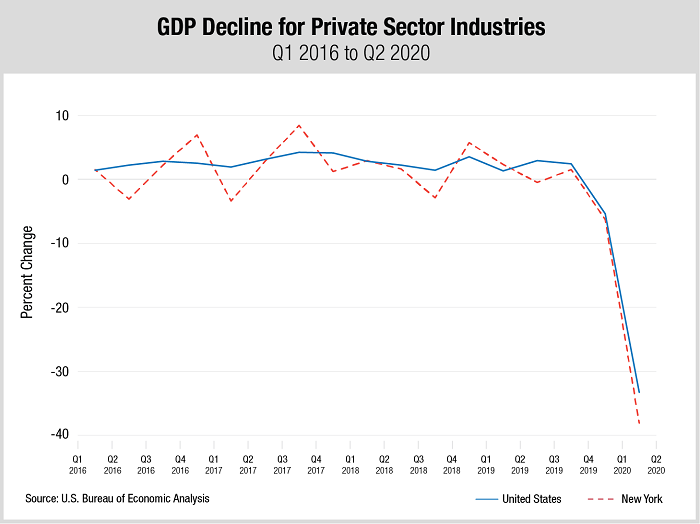 Five industries accounted for over half of the decline in the State’s overall economic activity: accommodation and food services; healthcare and social assistance; arts, entertainment, and recreation; professional, scientific, and technical services; and retail trade. The only industry sector that did not contribute to the decline in GDP in the second quarter was finance and insurance, which increased by 1.7 percent in the State.

After six consecutive weeks of the U.S. Census Bureau’s revised Small Business Pulse Survey, firms in New York are consistently reflecting economic hardship, and in many cases at levels exceeding the national average. The one general question asked at the beginning of the survey pertains to how the business has been affected overall by the COVID-19 pandemic. Every week the State’s small businesses have consistently exceeded the national average and ranked within the top three states in evaluating the effect of the pandemic on business operations as large. During the last available survey week of September 27–October 3, 43 percent expressed this sentiment.

In other key areas pertaining to the business’s operational capacity, rehiring efforts, and need for financial assistance, New York business owners expressed concerns that exceed the national average during the same period, including:

The State will receive hundreds of millions of dollars, and possibly more than $1.5 billion, in enhanced federal Medicaid funding beyond the level estimated in the latest Financial Plan update. The Families First Coronavirus Response Act, enacted in March, provides a 6.2 percent increase to each state’s federal Medicaid matching rate beginning January 1, 2020, and continuing through the last day of the calendar quarter of the COVID-19 public health emergency. The FY 2021 First Quarterly Update to the State’s Financial Plan, issued by the Division of the Budget (DOB) in August, anticipated that such enhanced funding would extend only through September 2020. On October 2, the Secretary of Health and Human Services extended the emergency declaration into the first quarter of 2021. Enhanced funding would remain in place through March 2021 unless the emergency is revoked before January 2021, and is already set to continue through December 31 because of a previous extension of the emergency by the Secretary. For October through December, DOB estimates the State will receive funding that is comparable to the $786 million expected for July through September. If the State also receives comparable funding for January through March 2021, total additional funding would likely exceed the current Financial Plan estimate by more than $1.5 billion.

The State’s General Fund balance was $15.4 billion as of October 9. Among other factors contributing to that balance are $4.4 billion in proceeds from short-term borrowing that is anticipated to be repaid before the end of the fiscal year, and more than $2 billion in delayed payments to local governments, nonprofit organizations and other entities.