Statewide, 28% of Lost Jobs Have Been Regained Through July; in NYC, 17%

While New York State has regained more than one in four of the jobs it lost in March and April, the unprecedented scale of losses due to the COVID-19 pandemic leaves a daunting path ahead for the State to climb back to pre-recession employment levels. For New York City, the picture is even more troubling.

New York State’s job count fell by more than 1.9 million in March and April. Through July, the State had regained 548,000 jobs, or 28 percent, as shown below. 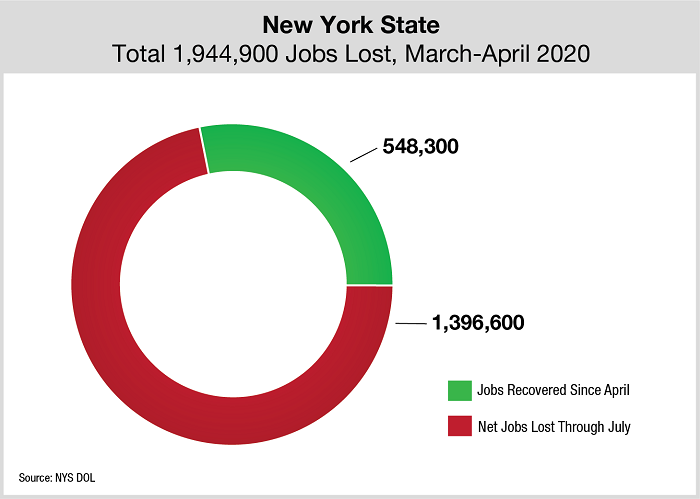 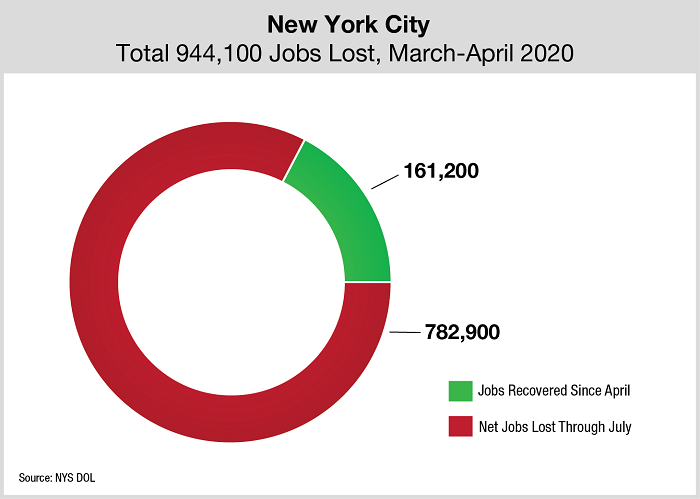 Throughout New York State and nationally, unemployment rates spiked upward in April, as shown below. Since then, unemployment has moderated noticeably both for the nation and for the State outside New York City. However, the City’s unemployment rate in July (latest figures available) remained several points above its April level. 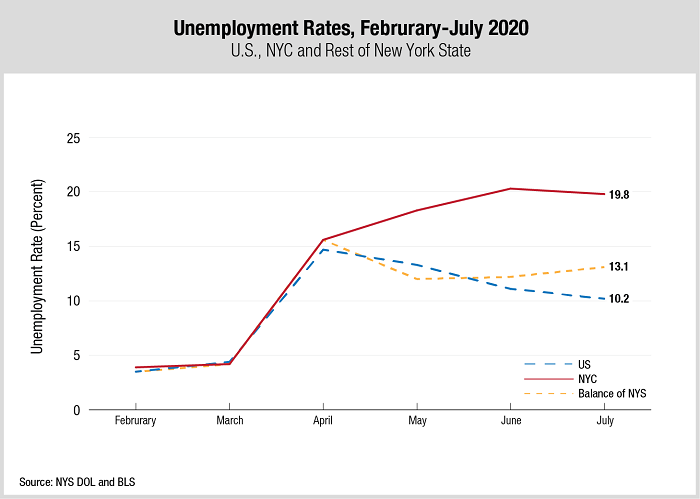 Forty-five percent of small businesses in New York State have experienced a large negative effect from the coronavirus pandemic, according to a U.S. Census Bureau survey during the week ending August 22. New York’s share was the second-highest among the states, 12 percentage points above the national average. Another 41 percent of New York small businesses reported moderate negative effects from the pandemic, while 5 percent experienced positive effects, and only 10 percent said the pandemic had little or no impact. (Reported percentages are rounded to the nearest whole number; the Census Bureau does not define elements of negative or positive impacts.)

Other survey results related to business operations include:

Over half of New York State small businesses believe that more than six months will pass before the business returns to its normal level of operations relative to a year ago, and 11 percent believe their businesses will never return to normal, the survey found.

On a more positive note, New York is also a leader among the states in the proportion of small businesses with recent rehirings. During the week ended August 22, 11 percent of small businesses in New York reported rehiring employees who had been furloughed or laid off after March 13 of this year – compared to 6 percent nationally. Due to survey limitations, data for more than a third of the states are not included in the Census Bureau results for this question.

The State’s General Fund balance was $12.8 billion as of August 28, compared to $14.4 billion on July 31. Factors contributing to that balance include:

The federal CARES Act provided $5.1 billion to New York State through the Coronavirus Relief Fund. As of August 28, the State’s CARES Act Fund held a balance of just under $4 billion. A total of $1.1 billion had been spent as of that date, including:

Unemployment insurance payments totaling nearly $41.8 billion have been processed by the Office of the State Comptroller, working with the State Department of Labor, since March 1. After peaking at more than $3.5 billion in early June, more recent weekly totals of such payments have declined but remained above $1 billion, still far above typical historical levels.

The deadline for completing the 2020 Census has been moved up to September 30, 2020. The decennial Census determines each state’s representation in Congress and influences federal spending for education, public transit systems, community development and other essential programs. An accurate count is critical for our State’s future; for more details, see this Census 2020 section of the Comptroller’s website. New Yorkers can respond today via the Census Bureau’s online response form.