Among the nearly 1.3 million net jobs the State lost from March through August, more than 320,000 were in accommodation and food services. These losses represented 41 percent of jobs in the industry before the recession hit, and one in every four jobs lost in all sectors statewide. Workers in this industry are disproportionately likely to be Black or Hispanic, according to Bureau of Labor Statistics data. As shown in the chart below, the average annual wage in 2019 for these hotel, restaurant and other jobs was $30,689, less than half the overall average for the State of $75,367. Retail trade, another sector with comparatively low wages, lost 93,000 jobs, one in every 10 of its previous total.

By contrast, finance and insurance employment, among the highest paid jobs in the State, declined by 19,000 or 3.7 percent. Professional services positions, another higher-paid sector, saw a decline of 60,000 or 8.6 percent.

Among broad industry categories shown in the table below, jobs in sectors with average wages below the overall State average made up 77 percent of net jobs lost statewide. (Industries reflected in the chart above are subgroups of sectors shown below.) The disproportionate impact on lower-paid workers is higher in New York City.

Nearly 1.3 million New Yorkers collected unemployment benefits for the week ending September 12. While this figure was down from 2.2 million in late May, the highest-ever recorded, it remained more than eight times the level of early March, as shown in the chart below.

Unemployment rolls spiked upward in March and April, including a three-week span starting in the last full week of March, when initial claims averaged more than 368,000 per week. Such first-time claims have been significantly lower since then, generally below 65,000 in recent weeks. Because individuals may receive unemployment benefits for many weeks, continuing claims (the total number collecting benefits) have decreased more slowly than the level of initial claims. 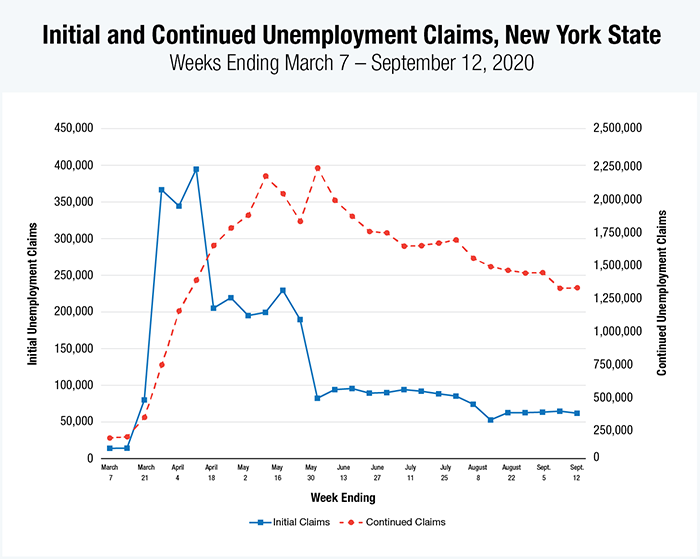 Data released by the U.S. Bureau of Economic Analysis (BEA) on September 24 measure the much-needed boost to New Yorkers’ incomes provided by traditional unemployment insurance, along with additional unemployment benefits and direct payments to individuals that were enacted as part of the federal government’s response to the pandemic. Total personal income in the State jumped by $72 billion or 21.8 percent in the second quarter of 2020 on a seasonally adjusted, annualized basis, according to BEA data.

The portion of personal income in New York from wages, salaries, proprietors’ income and other “net earnings” fell by $95 billion – but increased transfer receipts of $176 billion more than offset that loss. Total transfer receipts, nearly $414 billion, included $85 billion in unemployment compensation as well as an unspecified amount of economic impact payments to individuals resulting from the federal CARES Act.

New York’s quarterly decline in personal income from net earnings, 36.8 percent, was the third-highest among the states, behind Hawaii and Nevada. The State remained third, behind California and Texas, with total annualized personal income of just under $1.5 trillion.

The State’s General Fund balance was $15.7 billion as of September 25. Among other factors contributing to that balance are $4.5 billion in proceeds from short-term borrowing that is anticipated to be repaid before the end of the fiscal year, and more than $1.9 billion in delayed payments to local governments, nonprofit organizations and other entities.

The Coronavirus Relief Fund (CRF), created as part of the federal CARES Act, has provided $5.1 billion to New York State. The Division of the Budget (DOB) has reported that the State had incurred $2.2 billion in CRF-eligible expenses as of June 30, including certain off-budget spending by public authorities and the City University of New York. The U.S. Treasury has indicated that certain COVID-19 related workforce costs, such as those for public health and public safety (the latter including state police and correctional officers, among others), are presumptively eligible for CRF reimbursement. Such use of federal aid may reduce State General Fund costs from levels currently anticipated by DOB, thus freeing up resources for other purposes and potentially reducing the current year’s budget gap.