Budget Gap Between Revenues and Expenditures Remains a Concern

Over the past several years, budgetary actions have reduced the structural imbalance between the State’s revenues and its expenditures. However, challenges remain.

For instance, the State Fiscal Year (SFY) 2015-16 Enacted Budget includes over $6 billion in State-sourced non-recurring or temporary resources. This includes over $1.6 billion in payments that were made in SFY 2014-15 instead of SFY 2015-16, thus temporarily lowering spending needs. Based on Division of the Budget (DOB) projections of receipts and disbursements that include actions taken after the budget was enacted, the Office of the State Comptroller estimates that projected gaps in the coming three years will average more than $3.5 billion annually, partially reflecting the loss of the various temporary resources used in SFY 2015-16. While these projected gaps are smaller than in some recent years, they remain cause for concern.

DOB also projects spending growth in State Operating Funds will rise almost 4 percent annually from SFY 2016-17 through SFY 2018-19. To keep spending growth within the 2 percent benchmark, the State will need to take additional actions, although specific actions and their potential impacts have yet to be determined. 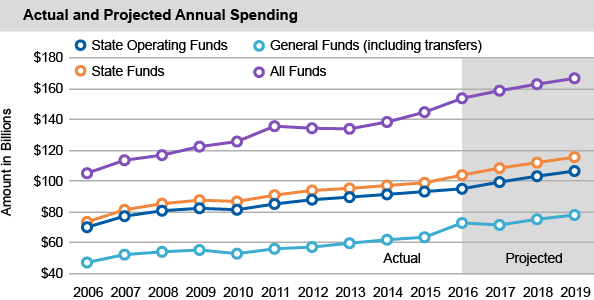 Uses of Some Settlement Funds Have Yet To Be Determined

Since April 2013, the State has received over $8 billion in monetary settlements from various financial and insurance institutions for violations of New York State banking and insurance laws. These non-recurring resources may appropriately be used for certain expenditures such as repayment of high-cost debt, one-time capital investments, enhancement of reserves or similar non-recurring expenditures. Although the SFY 2015-16 Enacted Budget included new Capital Projects Fund appropriations totaling $4.55 billion associated with these resources, the language governing the use of the money is very broad, leaving the possibility that the funds could be used for operating expenses or other non-capital purposes.

Ensuring that the State meets its needs for essential capital investment, and that it makes appropriate use of one-time resources such as the settlement funds, remain important priorities.

Another important issue with regard both to the State’s capital needs and its overall financial condition is its debt capacity.

The Executive currently projects that the State’s debt capacity, as measured by the statutory cap on State-Supported debt outstanding, will shrink to $470 million in SFY 2019-20. This decline is partially due to economic conditions, but also to the increased issuance of debt, especially in the years leading up to and including the Great Recession. Certain actions, such as a change in the financing structure for State University of New York dormitories, have preserved debt capacity under the statutory cap but did not alter the State’s debt burden. The challenge of lowering this debt burden remains.

Since statutory debt capacity is partially a function of Personal Income in New York State, the projected level of such capacity varies with different personal income projections. DOB projects Personal Income in New York State will increase an average of 5.1 percent annually over the next five years. IHS Global Insight projects a lower figure, an average of 4.2 percent over the same period. If Personal Income grows at a lower rate than anticipated and additional actions are not undertaken, the State’s projected debt capacity would shrink further or, potentially, disappear entirely. 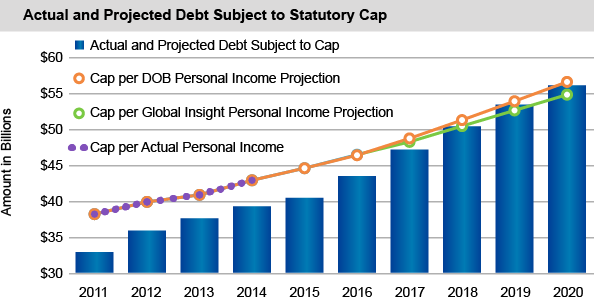 New York State has long trailed the national average for states, as well as a number of similar-sized states, in fund balance and reserves as a percentage of spending. 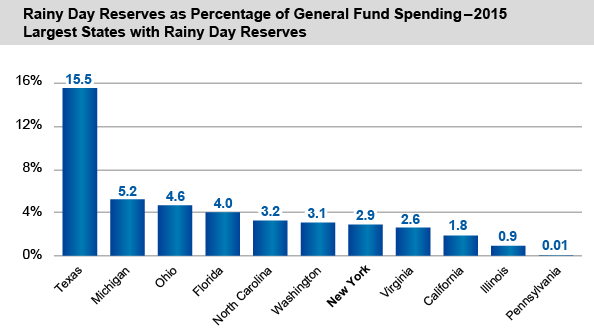 Going forward, the State’s heavy reliance on the financial sector requires recognition of the volatility that is inherent in New York State’s Personal Income Tax, some of its business tax revenues and in certain sources of miscellaneous receipts. New York City’s status as an international capital of finance is a key factor in the State’s collection of billions of dollars in settlements from large financial corporations in recent months—with the possibility of more settlements to come. Given the inherent difficulty in projecting such revenues, as well as other issues cited above, the State must do more to build budgetary reserves and work to reduce structural deficits in the years ahead.

Measures of the State’s workforce are important yet sometimes overlooked factors in the State’s economic fortunes.

The largest rate of labor force growth both in New York State and nationally was also among those 65 and older. Labor force participation has increased among this older population while shrinking overall. With the labor force an important supply factor in the economy, the aging of the labor force and its potential impact on future economic growth merit continued attention. 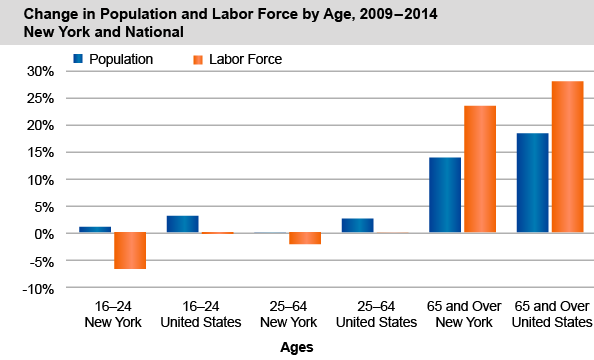