Even well into the economic recovery, local governments still face challenges, including managing their finances under the property tax levy limit, or “tax cap,” which has been in effect since 2012. Although most local governments are doing well, some struggle with making ends meet.

The Office of the State Comptroller has been monitoring the financial condition of each local government through its Fiscal Stress Monitoring System (FSMS). We have also stepped up efforts to shine a light on the operations of local authorities.

The tax cap has applied to schools for three years and counties for four years. Levies, which had been slowing in growth in the years before the tax cap, have stayed well under the limit.

Since school districts have particularly rigorous requirements for overriding the tax cap, they are less likely to override than other local governments.

Enacted in 2014, the Property Tax Freeze Credit—a tax relief program that reimburses qualifying New York State homeowners for increases in local property taxes on their primary residences—puts even more pressure on local governments and school districts to stay within the tax cap. This is because only taxpayers of municipalities or districts that levy within the tax cap can receive the credit rebate. 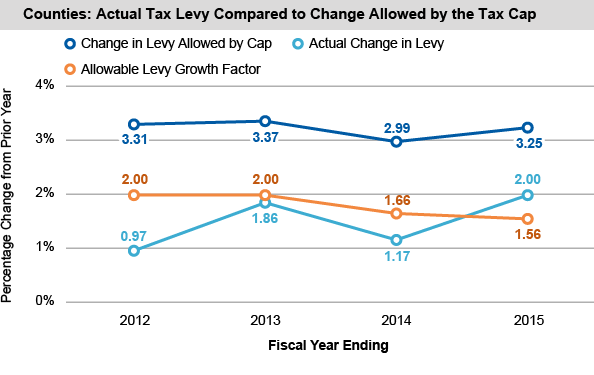 The scores inform local and State officials and the general public about the financial issues facing local governments. While most entities had scores that did not put them in any level of fiscal stress, they may still show some risk factors for stress.

The Comptroller’s Office observed some notable changes in how many local governments were in stress between the first and second year of the FSMS. 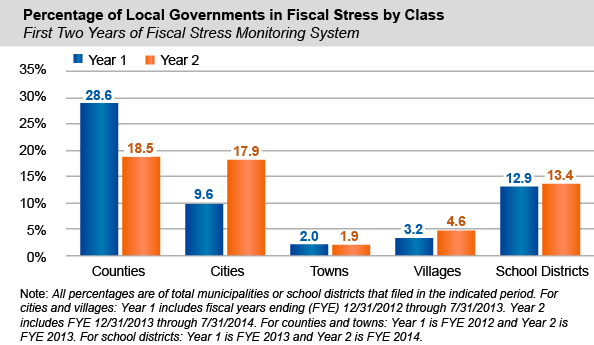 Local authorities exist to advance the goals of their communities. Because they operate outside many of the controls placed on municipal governments, assessing their effectiveness can prove difficult.

Water, sewer and solid waste authorities as a group represented the largest totals for revenue, expenditure and employment. They reported:

Industrial development agencies (IDAs) and local development corporations (LDCs) take the lead in issuing debt. Their $15.1 billion in debt represents 79 percent of debt for all local authorities. Much of the IDA debt is conduit debt—debt that the IDA issues on behalf of a business or other project that the IDA is supporting.