Budgetary actions and economic growth in recent years have reduced the structural imbalance between the State’s revenues and its expenditures. However, challenges remain, and potential budget gaps are growing.

The State Fiscal Year (SFY) 2016-17 Enacted Budget includes nearly $6 billion in non-recurring or temporary resources, excluding federal aid. Based on the Division of the Budget’s (DOB) most recent projections of receipts and disbursements that include actions taken after the budget was enacted, the Office of the State Comptroller estimates that projected gaps in the coming three years will average nearly $5.7 billion annually, partially reflecting the loss of the various temporary resources used in SFY 2016-17. While these projected gaps are smaller than projected gaps during the Great Recession, they represent an increase from more recent years and remain a cause for concern. 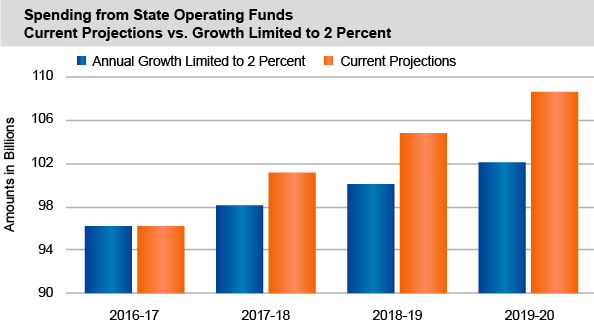 The Executive currently projects that the State’s debt capacity, as measured by the statutory cap on State-Supported debt outstanding issued after April 1, 2000, will shrink to just $305 million by SFY 2019-20. This decline is partially due to economic conditions, but also to the increased issuance of debt, especially in the years leading up to and including the Great Recession. Certain actions, such as a change in the financing structure for State University of New York dormitories, have preserved debt capacity under the statutory cap but did not alter the State’s debt burden. The challenge of addressing this debt burden remains.

Since April 2014, the State has received over $8.9 billion in monetary settlements from various financial and other institutions for violations of New York State banking, insurance or other laws. Most of these non-recurring resources were intended to be deposited in a dedicated capital projects fund for various appropriated purposes. However, the initial plan for use of these funds has changed and a large portion of these moneys will remain in the State’s General Fund until they are needed in the dedicated fund over the next several years, which provides the State with additional budgetary flexibility in the meantime. Also, $2.3 billion of these resources is being used in ways that allow the State to delay new bond issuances and preserve debt capacity in the short-term, while allowing capital spending to continue. This new plan leaves greater uncertainty for the currently appropriated uses of settlement resources than if the transfer and dedication of such resources occurred as initially planned. In addition, some settlement dollars have been appropriated for broadly written purposes. It’s not yet clear whether all or the majority of these one-time resources will be used appropriately for capital investments or other one-time purposes. Ensuring that the State meets its needs for essential capital investment, and that it makes appropriate use of one-time resources, such as settlement funds, remain important priorities.

On a positive note, the State has increased its reserves over the last 10 years, largely due to deposits in SFY 2014-15 of over $315 million to the Rainy Day Reserve Fund that was created in 2007. However, no additional deposits were made in SFY 2015-16, and the current Financial Plan doesn’t anticipate any this fiscal year, despite the extraordinary settlement resources received in recent years and a comparatively high General Fund balance. The State’s General Fund balance as of March 31, 2016 was 13.1 percent of expenditures, primarily because of non-recurring monetary settlement revenue received in SFY 2014-15 and SFY 2015-16. If the monetary settlements were excluded from the balance, the General Fund balance would have been 3.9 percent of General Fund spending, approximately the same as the national average and slightly higher than the average for the other 10 largest states with rainy day funds. 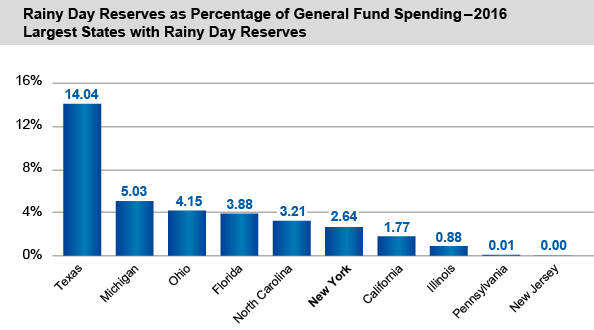 Along with employment, wage growth is essential to the New York economy as it provides individuals with increased spending power. It’s also vital to New York’s tax revenues as the personal income tax, particularly the withholding component, is the largest source of State revenue other than federal receipts. Overall wage growth in New York is significantly influenced by the wages of the financial sector, which include annual year-end bonuses. While average annual wage growth in New York outside the financial sector has kept pace with national wage growth since the end of the recession, ups and downs in the financial sector have resulted in volatility in overall wages, making tax revenues less predictable. Potential impacts on the State’s revenues from employment, wage and other key economic trends merit continued attention. 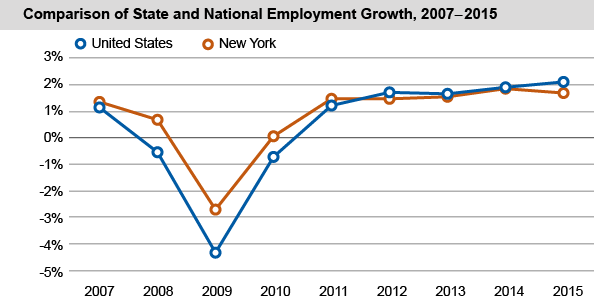 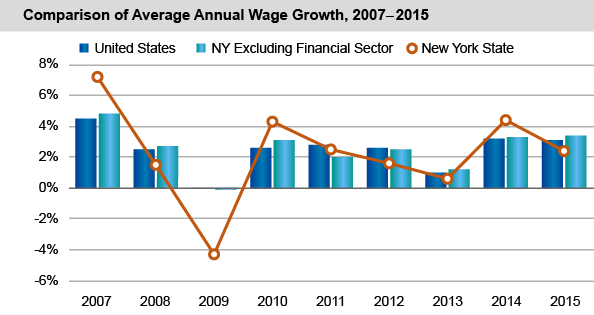 Comptroller DiNapoli has proposed a comprehensive fiscal reform package, including proposed constitutional and statutory amendments, to address four key issue areas and commit New York State to the highest standards of accountable, transparent and effective budgeting, as well as promoting fiscal sustainability. Key components of the plan include: