In the 10th year of the national economic expansion, New York State faces a variety of fiscal and economic challenges.

The SFY 2018-19 Enacted Budget Financial Plan includes nearly $12.7 billion in non-recurring or temporary resources through SFY 2021-22 with almost $6.7 billion of this total in the current year. The Division of the Budget (DOB) projects General Fund budget gaps in the coming three years will average nearly $6 billion annually before potential gap-closing actions, partially reflecting the loss of the various temporary resources used in SFY 2018-19. While these projected gaps are smaller than those during the Great Recession, they represent the highest since that time and remain a cause for concern. Other budgetary challenges include risks to federal aid, including funding for Medicaid and other health-care programs that are relied upon by millions of New Yorkers, and shrinking statutory debt capacity.

Debt capacity is an important issue with regard to the State’s capital needs and its overall financial condition.

The Executive currently projects that the State’s debt capacity, as measured by the statutory cap on State-Supported debt outstanding issued after April 1, 2000, will shrink to just $49 million by SFY 2020-21. Certain actions, such as a change in the financing structure for State University of New York dormitories, preserved debt capacity under the statutory cap but did not alter the State’s debt burden. Average annual State-Supported debt issuance over the last five fiscal years is nearly 20 percent lower than average annual debt issuance from the previous five year period (SFYs 2008-09 through 2012-13). While this has helped keep debt outstanding below the statutory cap, the challenge of addressing the State’s debt burden remains.

In addition, the State has issued debt for capital purpose grants to other entities. This practice results in liabilities for the State without creating corresponding State assets. 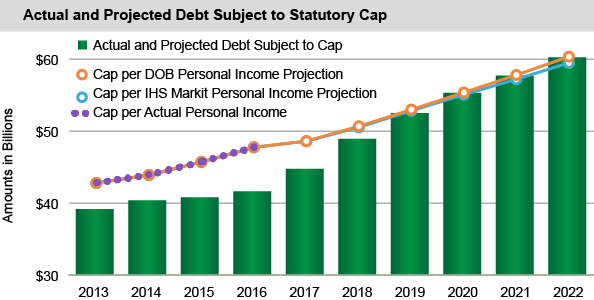 Since April 2014, the State has received over $11.1 billion in monetary settlements from various financial and other institutions for violations of New York State banking, insurance or other laws. The Financial Plan indicates an intent to use the majority of settlement funds for capital investments and other one-time purposes. However, the State is also using settlement funds for cash flow and debt management purposes that are presented as temporary in nature. The flexibility of these resources and their use for ongoing purposes may obscure the State’s underlying fiscal position and create uncertainty regarding other commitments.

DOB projects that roughly 70 percent of settlement dollars ultimately will be spent through the Dedicated Infrastructure Investment Fund, transferred to the Environmental Protection Fund (a capital projects fund), or used for mass transit or health care capital purposes. However, through the end of SFY 2017-18, 37.5 percent or $2.1 billion of what has actually been spent has gone to budget relief, and another $652 million is planned for such use in SFY 2018-19.

It is not yet clear whether all or the majority of these one-time resources will be used appropriately for capital investments or other one-time purposes or to bolster statutory budget reserves. Ensuring that the State meets its needs for essential capital investment, and that it makes appropriate use of one-time resources such as settlement funds, remain important priorities. 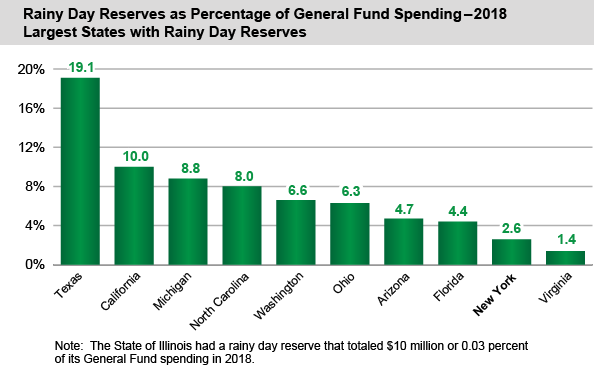 The General Fund cash balance as of March 31, 2018 was $9.4 billion. That figure is substantially higher than the levels in the period during and immediately after the Great Recession, largely reflecting monetary settlements received in the past four years as well as timing of certain personal income tax receipts. But the State’s budgetary cushion is shrinking: the First Quarterly Update to the Enacted Budget Financial Plan projects that the General Fund balance will be 39 percent lower at the end of the current fiscal year than last year, and such reserves are projected to decline further in each year through SFY 2021-22. Although the State has collected over $11 billion in monetary settlements, none has been used to increase statutory reserves.

New York State has trailed the national average for states, as well as a number of similar-sized states, in reserves as a percentage of spending, a key indicator of fiscal condition. The State has increased its reserves over the last 10 years, largely due to deposits in SFY 2014-15 of over $315 million to the Rainy Day Reserve Fund that was created in 2007. However, no additional deposits have been made since, and the current Financial Plan doesn’t anticipate any in the future. The State’s General Fund balance as of March 31, 2018 was 13.5 percent of expenditures, primarily because of non-recurring monetary settlement revenue received since April 1, 2014 and unusually high PIT collections at the end of the 2017 tax year. If the monetary settlements and accelerated PIT receipts were excluded from the balance, the General Fund balance would have been 3.7 percent of General Fund spending, significantly lower than the national average as well as the average for the other 10 largest states with rainy day funds.

The State’s primary statutory reserve funds, the Tax Stabilization Reserve Fund and Rainy Day Reserve Fund, are currently authorized to hold more than $5.2 billion. Their combined balance of $1.8 billion represents just over one-third of that total and is projected to decline as a proportion of General Fund spending in each year of the Financial Plan period.

With declines in unrestricted reserves and no plan to bolster statutory reserves over the Plan period, the State may be increasingly left with limited flexibility to respond to economic downturns or catastrophic events.

The State faces substantial reductions in federal aid for health care and other programs if proposed changes at the federal level are enacted. DOB currently projects the State will receive $60.1 billion in federal funds for various programs in the current fiscal year, representing an increase of 1.9 percent from SFY 2017-18. Given that federal funding represents more than one-third of the State’s revenue, the unpredictable nature of federal budget and policy discussions presents an elevated concern.

Medicaid receives the largest share of federal funds in the State’s budget. However, the State also uses federal resources for other purposes including transportation, education, environmental protection and various social services. While the SFY 2018-19 Enacted Budget again includes provisions to help address potential federal funding reductions at the State level, it leaves uncertainty regarding fiscal and programmatic repercussions for recipients of State funding if such provisions are implemented.

Over the course of the Great Recession and into the start of the U.S. economic recovery, employment fared better in New York than nationally. However, while New York State as a whole has regained all of the jobs it lost during the recession, its job growth has lagged the nation over the course of the expansion. In addition, employment growth has been uneven across the State, with downstate experiencing relatively robust job creation and most upstate regions seeing much more modest, if any, net employment gains. 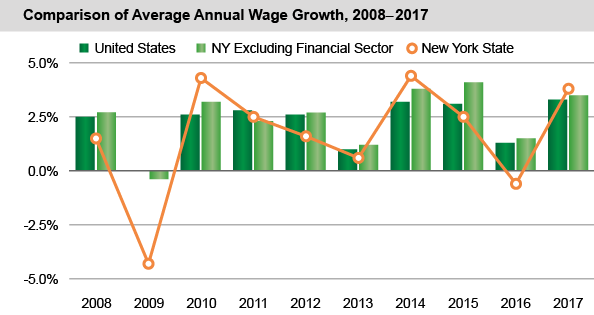