After more than a decade of national economic expansion, New York State faces a variety of fiscal and economic challenges. The nation continued to see gains in overall economic activity during the first half of calendar 2019, but the pace of growth for the year is projected to be slower. Increased trade tensions with China, financial market volatility, and global economic slowdown are among factors that could slow U.S. economic growth further than currently forecasted.

The Division of the Budget projects healthy growth in tax receipts for the current year and continuing growth through the four-year Financial Plan period. However, if a recession occurs, revenues could fall below these projections. Revenue shortfalls associated with previous recessions have led to difficult policy responses including spending reductions targeting education, health care and other programs as well as increases in State taxes and fees.

New York State’s job growth has lagged the nation over the course of the expansion. In addition, employment trends have been uneven across the State. While New York City has been experiencing relatively robust job creation, most upstate regions have seen more modest, if any, net employment gains. 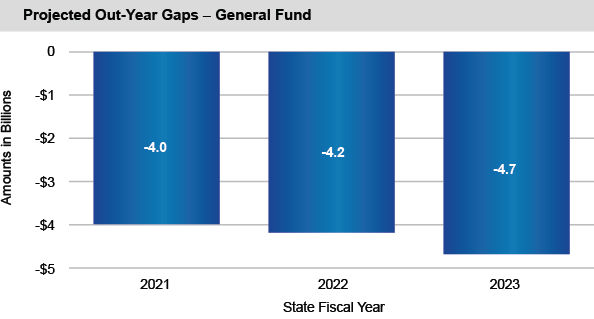 Population and Workforce Trends Are Mixed

Over the long term, population trends and the makeup of the State’s workforce are important factors affecting New York’s overall economic vitality and quality of life for its residents. Although the State’s overall population rose modestly (by 0.8 percent) from 2010 to 2018, that pace was well behind the national growth of
6 percent, as shown earlier in this report. A number of upstate counties experienced population losses during that period.

Although the unemployment rate has declined in every region of the State in recent years—and that is generally a positive sign—in some areas a shrinking workforce has contributed to the drop in unemployment. The overall count of people in the labor force includes those who are employed as well as those who are not currently working but are looking for a job. When the number of people in the workforce declines, it’s possible for both the unemployment rate and total employment to fall at the same time. Several upstate regions have experienced such trends in recent years.

New York State relies heavily on its Personal Income Tax (PIT), which produces nearly two-thirds of all State tax revenues. High-earning individuals, whose income from capital gains and other sources can be volatile, generate a disproportionately large share of PIT receipts. In 2017, the highest-earning 1 percent of taxpayers in New York reported 29.4 percent of gross income and generated more than 42 percent of all PIT liability. Depending on the specific nature of any economic downturn, taxable income and tax liability from such individuals may drop sharply.

The new limit on federal deductions for state and local taxes, which has resulted in shifts to the timing of certain revenues over the past two years, may continue to have unpredictable effects.

The State Budget Is Not Structurally Balanced

The SFY 2019-20 Enacted Budget Financial Plan includes more than $8.3 billion in non-recurring or temporary resources for the current fiscal year. While more than half of this results from the five-year extension of the top PIT rate on upper-income earners, billions of dollars in other temporary resources are projected to be used this year. The Division of the Budget (DOB) projects General Fund budget gaps in the coming three years will average $4.3 billion annually before potential gap-closing actions, partially reflecting the loss of certain temporary resources used in SFY 2019-20.

While Capital Spending Is Growing, Debt Capacity Is Projected to Shrink

The State relies on borrowing to fund a wide range of capital investments for purposes including transportation, clean water, education and others. DOB projects capital spending will average $13.4 billion annually over the current five-year capital planning period, an increase of over 25 percent from the previous five fiscal years.

The Executive currently projects that the State’s debt capacity, as measured by the statutory cap on State-Supported debt outstanding issued after April 1, 2000, will shrink to $415 million by SFY 2023-24. Such debt capacity reflects the levels of both outstanding debt and of personal income in New York. If personal income does not rise as projected by DOB—which could occur if the nation experiences an economic downturn—debt capacity may be lower than currently expected, with potentially troubling implications for the level of planned capital expenditures.

Statutory Rainy Day Reserves Are Up, but the State’s Overall Budgetary Cushion Is Shrinking

DOB deposited $250 million to the Rainy Day Reserve Fund at the end of SFY 2018-19, a positive step, and projects an additional $428 million deposit at the end of the current fiscal year if fiscal conditions permit. If such a deposit is made as projected, combined balances in the State’s two major statutory rainy day reserves would reach $2.3 billion, roughly 43 percent of their statutorily allowed levels.

The General Fund cash balance as of March 31, 2019 was $7.2 billion. While that figure is higher than the levels in the period during and immediately after the Great Recession, it reflected a decline of 23.7 percent from a year earlier, as the State continued to use monetary settlement resources received in recent years. DOB anticipates that the General Fund balance will reach $6.5 billion, its lowest year-end level in six years, at the end of the current fiscal year. DOB has indicated that certain General Fund moneys outside the statutory rainy day reserve funds add to the State’s overall resources that could be drawn upon if needed in the context of an economic downturn. Declines in the General Fund balance represent more limited flexibility to respond to economic downturns or catastrophic events. Comptroller DiNapoli continues to urge that budgetary reserves be bolstered.

Federal funding in the State budget is projected at $66.3 billion this year, up 8.1 percent from last year and more than one-third of total receipts. The State has benefited in recent years from increases including expanded federal support for health care through Medicaid and other programs.

Still, the State faces continuing risks in this area. These include the possibility of reduced federal aid for New York’s Essential Plan, which provides health coverage for approximately 800,000 New Yorkers. Scheduled reductions in certain federal payments to hospitals that treat large numbers of Medicaid recipients and uninsured individuals could have significant negative impacts on hospitals and other entities.

Comptroller DiNapoli has called for comprehensive fiscal reform to address four key issue areas and commit New York State to the highest standards of accountable, transparent and effective budgeting, as well as promoting fiscal sustainability. Such steps should include: