While the recession brought on by the COVID-19 pandemic was short-lived, employment has yet to recover fully. During March and April 2020, nearly 2 million jobs were lost in New York State and, as of August 2021, only 55 percent of those jobs were regained. No region of the State has returned to pre-pandemic employment levels with New York City trailing its February 2020 levels by over 500,000 jobs.

Economic forecasts are inherently subject to risk, but the path of the coronavirus pandemic will heavily influence economic activity for the foreseeable future. Outbreaks of new variants, vaccination rates, and their impact on consumer and employer behavior all provide a high level of uncertainty with regard to the pace of the recovery and its impact on tax revenues and spending on programs.

The Key Role of Federal Funding

Federal aid has long played an essential role in the State’s budget and its ability to provide health care, education, human services and other essential programs. In recent years, for example, new federal funding has helped to extend health coverage to more than 1.5 million additional New Yorkers. During SFY 2020-21, federal aid represented almost 41 percent of total State receipts, significantly higher than the 34.5 percent average from the previous 10 years. The largest share of federal aid supports Medicaid and other health care programs.

At the beginning of the COVID-19 pandemic, tax receipts fell sharply, and the Division of the Budget (DOB) projected that tax revenues would not again reach the SFY 2019-20 level until SFY 2023-24. However, total tax collections for SFY 2020-21 ended the year $6.8 billion higher than projected in the Enacted Budget Financial Plan and only $513.3 million below the previous year. Higher than anticipated federal COVID-19 response and recovery funding helped support State spending. As a result, by the end of the year, DOB was able to avoid making $8.2 billion in local assistance reductions, make over $3 billion in debt service prepayments and defeasements, and pay off more than $900 million in amortized pension payments.

New Yorkers consistently pay more in federal taxes than the State receives in federal spending, as several reports by the Office of the State Comptroller have shown. The most recent report, issued in November 2020, found that in Federal Fiscal Year 2019, New York generated $23.7 billion more in taxes paid to Washington than in federal spending received.

In the SFY 2021-22 Enacted Budget Financial Plan, DOB identifies $38 billion in pandemic-related federal spending over a five-year period with significantly more going directly to local governments, school districts, businesses and individuals. Federal proposals currently before Congress may provide additional infrastructure and other dollars for New York’s State and local governments, although it is unclear whether this increased support would alter the imbalance of payments between New Yorkers and Washington. 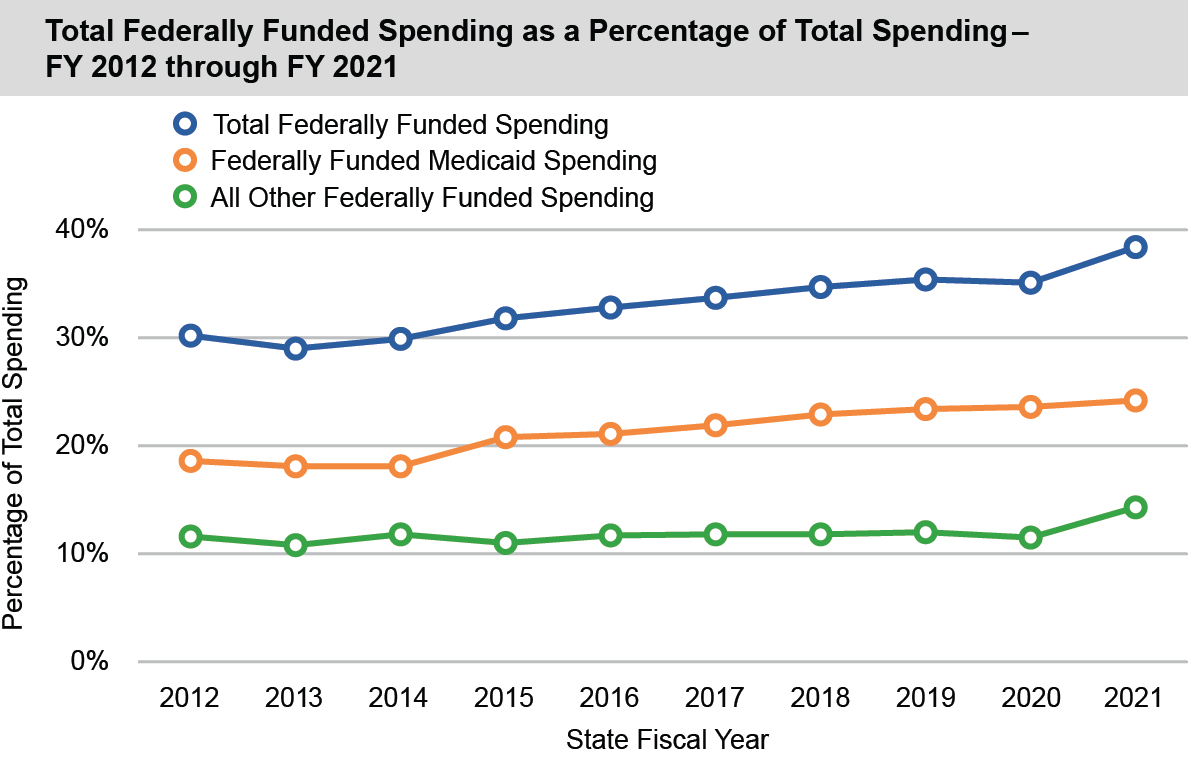 New York State’s budget relies heavily on its Personal Income Tax (PIT), which produces two-thirds of all State tax revenues. The SFY 2021-22 enacted budget increases tax rates for high-income earners that promises to increase that dependence, and the volatility of the tax base, even more. High-earning individuals generate a large share of PIT receipts. In 2019, the top 1.2 percent of taxpayers in New York generated 38 percent of all PIT liability. An economic downturn may cause taxable income and tax liability from such individuals to drop sharply because they tend to rely on non-wage income, such as capital gains, which are more volatile than wages. This disproportionate volatility in the State’s revenue mix magnifies the impacts of both good and bad economic times on the State’s budget. 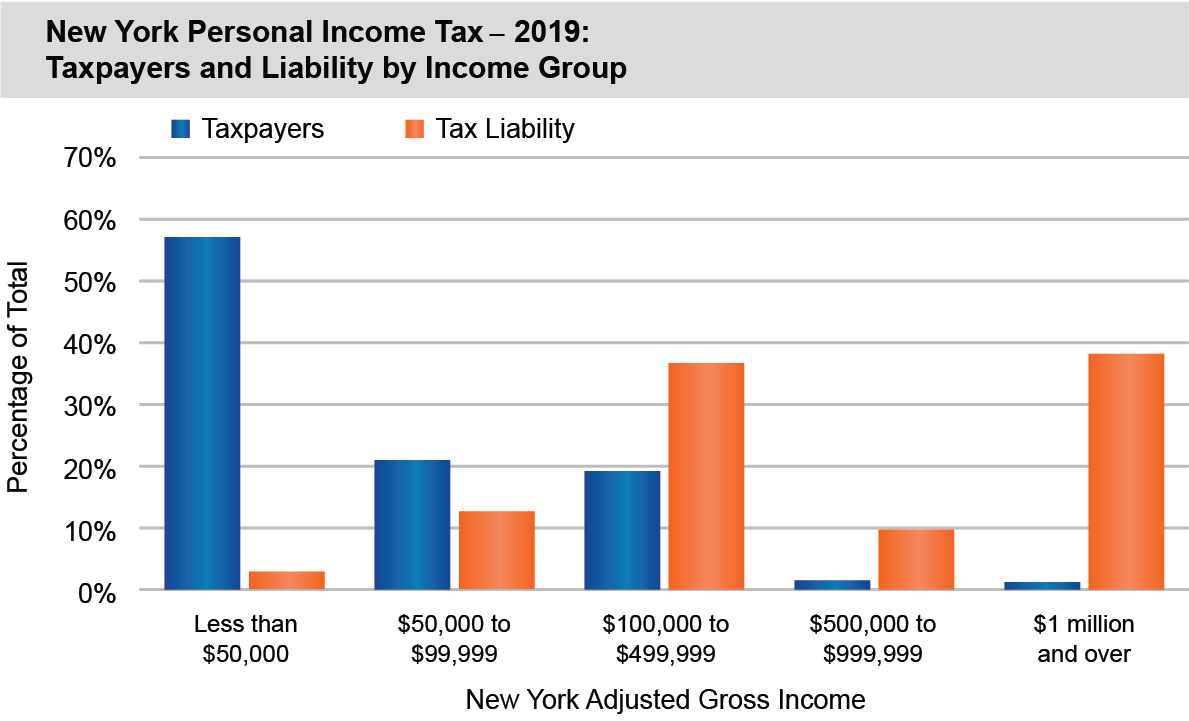 Comptroller DiNapoli repeatedly warned in the years before the COVID-19 pandemic and ensuing recession hit New York that the State’s budgetary reserves were not sufficient to guard against unwanted spending cuts, tax increases or other actions in case of an economic downturn or catastrophic event. Unfortunately, the fiscal impacts of the pandemic have proven those warnings were well founded.

As of March 31, 2021, combined balances in the State’s two major statutory rainy-day reserves totaled just less than $2.5 billion, roughly 42 percent of their statutorily allowed levels and approximately 3.3 percent of General Fund spending. These funds were insufficient in the face of a $14 billion gap identified in SFY 2020-21 by DOB. To manage that gap, DOB withheld substantial amounts from payments to school districts, local governments, nonprofit organizations and other entities. While these payments were eventually made by the end of the fiscal year, adequate reserves would have negated the need to reduce aid to local governments and other entities that were also facing severe financial circumstances.

The SFY 2021-22 Enacted Budget Financial Plan does anticipate adding
$175 million to the Tax Stabilization Reserve Fund and another $650 million to the Rainy-Day Reserve Fund. In addition, Comptroller DiNapoli proposes using higher-than-anticipated tax collections to make a substantial infusion to the rainy-day reserves to begin increasing these funds to at least 10 percent of General Fund receipts (currently $8.7 billion).

As noted above, the economic and revenue impacts of the pandemic are likely to continue over multiple State fiscal years. As soon as possible, the State should develop and implement concrete plans to build up its statutory reserves. This will help to counterbalance the inherent volatility of PIT receipts in the State’s budget and strengthen its ability to avoid harmful budgetary actions during the next economic downturn. 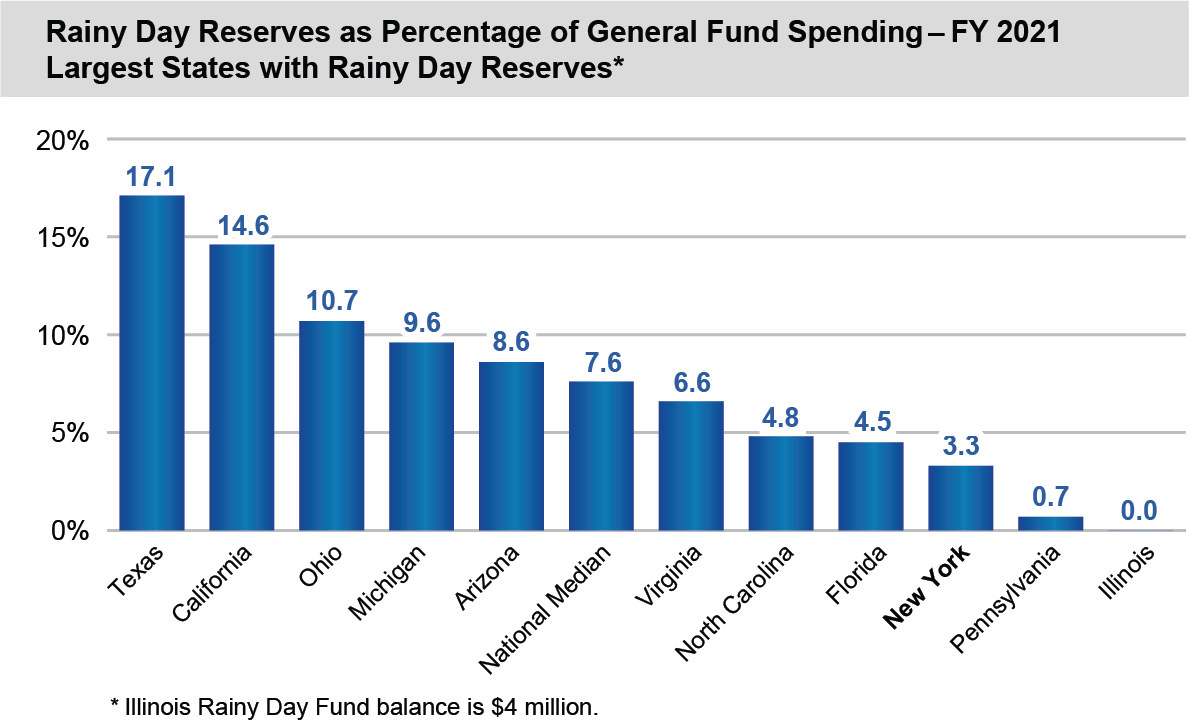