Report prepared by the Office of Budget Policy and Analysis

Message from the Comptroller

Owning a home has long been described as “The American Dream.” In New York, that dream appears unattainable for a large share of the population: New York has the lowest homeownership rate among the states, with only 53.6 percent owning a home in the second quarter of 2022, compared to 65.8 percent nationally.

Concerningly, New York also has racial and ethnic homeownership gaps that are higher than the nation, with Latino homeownership rates particularly low in our state. While these gaps originate in historic injustices against communities of color, their persistence is troubling.

Homeownership remains an important vehicle for building wealth, and reducing inequities in real estate practices and boosting homeownership should be important priorities for maintaining New York’s competitiveness as a place of opportunity.

New York Has Lowest Homeownership Rates in the Nation 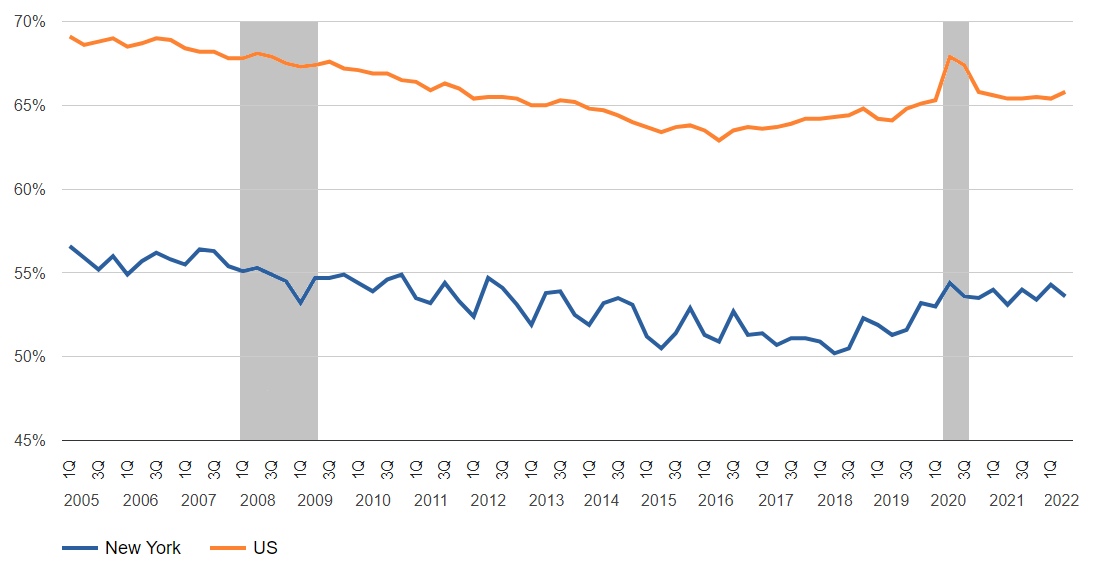 New Yorkers’ homeownership has grown steadily since then, including a pandemic-spurred rise from 53.0 percent in the first quarter of 2020 to 54.4 percent in the second quarter of 2020. According to the Census Bureau, the increase in remote work unlocked homeownership opportunities for renters who may have been unable to afford homes in the metro areas in which they worked by allowing them to purchase more affordable housing farther from their work locations. Growing incomes prior to the pandemic, slowing foreclosures, and low interest rates also contributed to the rise.1 Nationally, the 2020 jump was the Association of Realtors; however, rates have not yet returned to 2005 levels. In the second quarter of 2022, homeownership rates were 53.6 percent in New York and 65.8 percent nationally.

In 2021, New York’s annual homeownership rate was the lowest in the nation at 55.4 percent. Only two other states have rates lower than 60 percent: California (55.9 percent) and Nevada (59.1 percent). Like New York, these states have high shares of housing with 10 or more units; in contrast, in almost all 13 states with homeownership rates greater than 70 percent, single family housing comprises more than 70 percent of the housing stock.2

Large population centers tend to have more multi-family housing, and New York’s low homeownership rate is mostly attributable to the prevalence of multi-family housing in New York City, the nation’s most populous city. In 2020, the most recent year for which local data are available, multi-family homes with 10 or more units comprised the greatest shares of housing stock in Manhattan (90 percent), the Bronx (68 percent), Brooklyn (42 percent) and Queens (36 percent). These counties, where more than 40 percent of the State’s population resides, are also the only counties that had homeownership rates lower than the State average in 2020:3 Queens, 45 percent; Brooklyn, 30 percent; Manhattan 24 percent; and the Bronx, 20 percent. Homeownership rates exceed the state average in all other counties and are greater than 70 percent in 35 counties.4 Single-unit homes comprise the majority of housing stock in all other New York counties.5 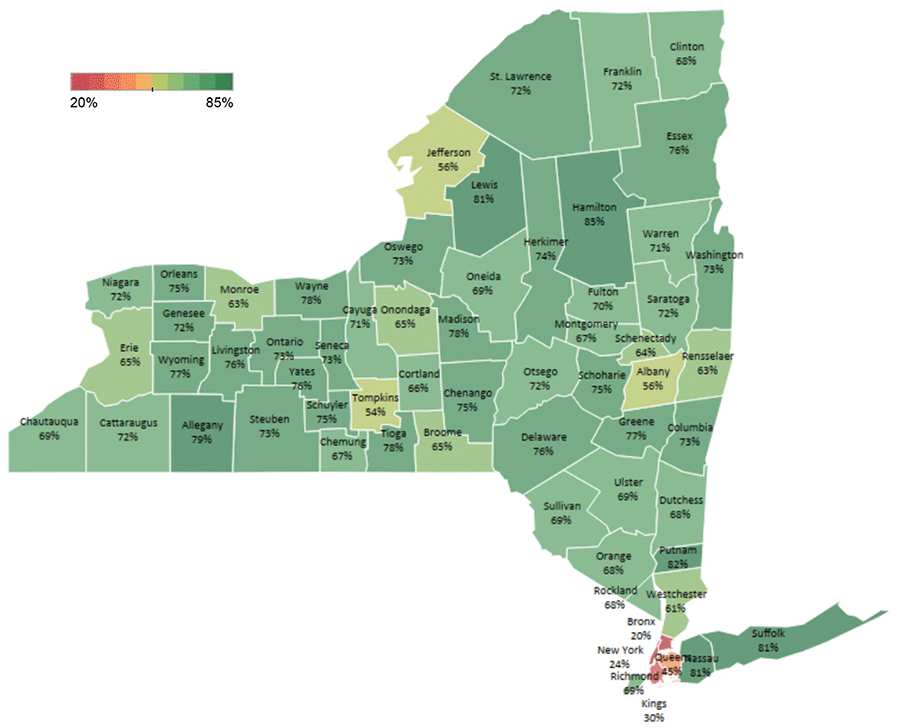 Racial and Ethnic Homeownership Gaps Are Higher than the Nation

Note: Hispanic homeowners may be of any race.

FIGURE 5 – Gap in Homeownership Rate Relative to White Households, NY and US, 2021

Note: Hispanic homeowners may be of any race.

Homeownership can present many advantages. Research finds that homeownership has social benefits that include higher rates of neighborhood stability, civic participation and community engagement, as well as better maintained housing stock and greater housing security.9

Homeownership also has economic benefits. While purchasing, maintaining, and supporting the mortgage of a home entails financial risk and does not always prove to be a solid investment for everyone, overall, homeownership has served as an important vehicle for Americans to build wealth, which occurs as home prices appreciate and equity grows over time.10 In 2020, the median net value of assets held by American households was largest for real estate assets, and the median net worth of homeowners was $336,600 compared to just over $5,700 for renters.11 Research from the Federal Reserve Board of New York finds home equity is a larger part of the net worth for Black and Hispanic households than it is for White households that own their homes.12 Homeownership has also been important for building intergenerational wealth; for example, the Urban Institute finds children of homeowners are more likely to own homes themselves.13

These benefits highlight both the importance of promoting homeownership and the perils of maintaining racial and ethnic homeownership gaps that are larger than the national averages. There are multiple, complex reasons for disparities in homeownership rates, many stemming from historically unjust policies, including racially restrictive housing covenants and “redlining” practices by the Federal Housing Administration and financial institutions that denied provision of loans to Black households or in predominantly black neighborhoods.14 While the federal Fair Housing Act of 1968 was enacted to prohibit discrimination in the sale or rental of housing, the exclusionary practices in effect during the widespread homeownership expansion that occurred in the post-World War II era have had compounding generational effects.15

A 2020 report from the Joint Center for Housing Studies of Harvard University states, “Racial disparities in housing are both a cause and a consequence of other social inequalities. Discriminatory practices have limited the opportunities for people of color to live in neighborhoods that offer good-quality schools and public services, while also increasing their exposure to crime and other environmental hazards. The nation’s long history of housing and mortgage market discrimination has also prevented generations of Black and Hispanic households from buying homes and accruing wealth.”16

Furthermore, there is evidence of persistent inequitable real estate and financing practices. In August 2022, three brokerage houses on Long Island were fined for discriminatory practices, including steering prospective homebuyers of color away from white neighborhoods, in violation of the Fair Housing Act.17 A 2021 analysis from the Federal Home Loan Mortgage Corporation (commonly known as “Freddie Mac”) finds higher shares of appraisals below the contract price in majority-Black and -Hispanic neighborhoods relative to majority-White neighborhoods.18 Research from the Federal Reserve Board of Philadelphia also indicates Black loan applicants were denied for mortgages for properties in Philadelphia at higher rates than White applicants, with Black applicants far more likely to be denied based on credit histories and low credit scores.19 Student loan debt may play a role; Black students are more likely to take on more debt and to default, and increases in student loan burdens have been found to depress homeownership rates.20

The Biden Administration has announced a series of initiatives to eliminate discriminatory practices and aid homeownership, including the creation of a new interagency taskforce to address inequity in home appraisals (Property Appraisal and Valuation Equity [PAVE] Taskforce), formulating a new legal framework under the Fair Housing Act, proposing $100 million in new funding to states to support sustainable homeownership, and awarding grants to support housing counseling and families enrolled in the Family Self-Sufficiency Program, which places funds in escrow for families participating in the Housing Choice Voucher Program.21

The State can also take action to facilitate homeownership and remedy racial and ethnic homeownership gaps. First, the State can work to ensure that the availability of homeownership assistance is widely known. The State of New York Mortgage Agency provides low-cost mortgages, down payment assistance, and housing counseling services to expand access to affordable homeownership. Second, improved reporting on available homeowner assistance programs is necessary to understand who benefits from these programs, identify underserved populations, and pinpoint constraints that may be leading to underserved borrowers being excluded from programs; policymakers have to consider retooling or reconfiguring some of these services to ensure broader availability. Third, expanded monitoring of and enforcement against discriminatory practices in the housing industry, including mortgage financing, appraisals, and other services should be pursued to ensure that illegal, systemic barriers do not remain. Finally, the State can redouble efforts to educate potential homebuyers on the value of homeownership. As indicated by recent audit, State agencies can improve their financial literacy programs, particularly through greater outreach to vulnerable consumers.

New York City has announced new initiatives to improve understanding of homeownership and to make supporting affordable homeownership an objective of the housing blueprint. Specific efforts to support this goal include expanding housing supply, including through the creation of smaller homes, transforming “zombie homes,” and expanding financing opportunities and down payments assistance programs.

1 Richard Fry, “Amid a pandemic and a recession, Americans go on a near-record homebuying spree,” March 8, 2021, Pew Charitable Trusts, https://www.pewresearch.org/fact-tank/2021/03/08/amid-a-pandemic-and-a-recession-americans-go-on-a-near-record-homebuying-spree/.

9 William M Rohe, Shannon Van Zandt and George McCarthy, “The Social Benefits and Costs of Homeownership: A Critical Assessment of the Research,” May 2000, Center for Urban and Regional Studies, University of North Carolina at Chapel Hill, Working Paper No. 00-01.

11 Real estate assets refer to rental property equity and equity in own home, for which the median values were $175,000 and $150,000, respectively, greater than all other assets and financial instruments identified by the survey and larger than the total ($140,000). See U.S. Census Bureau, Survey of Income and Program Participation, Survey Year 2021, Public Use Data, released August 31, 2022.

14 The Urban Institute provides a concise explanation of these forces and further resources in “Structural Racism Explainer Collection,” accessed September 29, 2022, at https://www.urban.org/racial-equity- analytics-lab/structural-racism-explainer-collection/causes-and-consequences-separate-and-unequal-neighborhoods; see also Brian J. McCabe, “Why Buy a Home? Race, Ethnicity, and Homeownership Preferences in the United States,” 2018, Sociology of Race and Ethnicity, vol.4 no 4, pages 452-472.

16 Joint Center for Housing Studies of Harvard University, The State of the Nation’s Housing: 2020, https://www. jchs.harvard.edu/sites/default/files/reports/files/Harvard_JCHS_The_State_of_the_Nations_Housing_2020_Report_Revised_120720.pdf

21 U.S. Department of Housing and Urban Development. “Statement from Secretary Marcia L. Fudge on Black Homeownership Remaining Lower Than A Decade Ago Despite the U.S. Homeownership Rate Experiencing the Largest Annual Increase on Record,” February 24, 2022, at https://www.hud.gov/press/press_releases_media_advisories/HUD_No_22_029.