New York ranks seventh among all the states in the percentage of adults who are experiencing food scarcity, at 14 percent compared to the 11 percent national rate, according to the U.S. Census Bureau’s latest Household Pulse Survey.

More than 1.7 million New York adults live in households that sometimes or often in the past week did not have enough to eat, according to the Census survey in late January and early February. (The Census Bureau refers to either “food scarcity” or “food insufficiency” to characterize these findings.) Children are not counted in the Census data. Including them would add substantially to the total.

Nationally, rates of food insufficiency are especially high for Black and Hispanic households, at 21 and 20 percent respectively, according to the Census data. Rates for White and Asian households were lower, at 7 and 8 percent respectively. The interactive map above shows the latest Census Bureau estimates of the percentage of adults in each state whose households sometimes or often have not had enough to eat during the most recent Census survey period and in previous surveys dating to August 2020.

More than 2,742,000 New Yorkers received Supplemental Nutrition Assistance Program (SNAP, formerly known as food stamps) benefits in December 2020, up by about 182,000 or 7.1 percent since February, according to data from the State Office of Temporary and Disability Assistance (OTDA).

The statewide total jumped by nearly 122,000 in April and another 53,000 in May, and has remained relatively stable since then, with a peak of around 2,789,000 in September 2020. The pre-pandemic February 2020 figure, just over 2.5 million, was the lowest since September 2009. The overall increase since February is driven largely by New York City, with growth of nearly 165,000 or 11.1 percent. Suffolk and Albany counties have also seen double-digit percentage increases, and caseloads in most other counties are up more modestly over the period. However, in 22 counties, including Broome and Monroe, SNAP numbers have decreased. Reasons for such declines are not clear. The table below provides figures for all counties and New York City.

Those SNAP recipients who were not already receiving the maximum allotment for their household size have been issued emergency supplemental benefits due to federal legislation enacted in March 2020. An additional, temporary 15 percent increase in benefits was authorized as part of federal legislation enacted in December, in effect for January through June 2021. According to OTDA, a household of four may currently receive a maximum monthly allotment of $782, including those additional benefits.

Delinquencies among single-family home mortgages doubled or tripled in communities across New York State in the third quarter of 2020 compared to a year earlier, with especially high percentages in New York City and other downstate areas, according to new data from the Federal National Mortgage Association (FNMA or Fannie Mae).

In Bronx, Brooklyn and Queens, delinquency rates for single-family home mortgages backed by FNMA were all over 8 percent in the third quarter of 2020, reflecting sharp increases in the wake of the COVID-19 pandemic, as shown in the nearby table. For Queens, the 8.1 percent figure was more than four times the year-earlier rate.

In each of those areas, as well as in Staten Island and several others, more than 5 percent of mortgages were 90 days or more delinquent, compared to 1 percent or less a year earlier. While federal and State protections against foreclosure that were implemented in response to the pandemic may also affect the 2020 figures, the 90-day measure is considered to reflect serious financial stress for increasing numbers of households.

In both Westchester and the Mid-Island area of Long Island, 6.8 percent of mortgages were delinquent in the third quarter of 2020, including 4.5 percent that were 90 or more days late. Areas north of New York City and its closest suburbs also saw delinquency rates spike upward over the year. In the Mid-Hudson region, 6.5 percent of mortgages were late, with 4 percent delinquent by 90 or more days. For Poughkeepsie, those figures were 6.4 percent and 3.7 percent, respectively; and in Glens Falls, 5 percent and 2.9 percent.

By contrast, and in keeping with certain broader economic trends, some upstate housing markets have seen more muted impacts in the wake of the pandemic. Among others, Buffalo, Rochester and Syracuse delinquency rates were below 4 percent in the third quarter of 2020, despite increases over the year.

The traditional state UI program is funded by employer contributions. When funds from those contributions are depleted, states may draw advance payments from the U.S. Treasury’s Unemployment Trust Fund; New York has been doing so since May 2020. As of January 29, New York’s outstanding advance balance from such payments was $9.6 billion. Under current law, that balance must be repaid by future employer contributions. 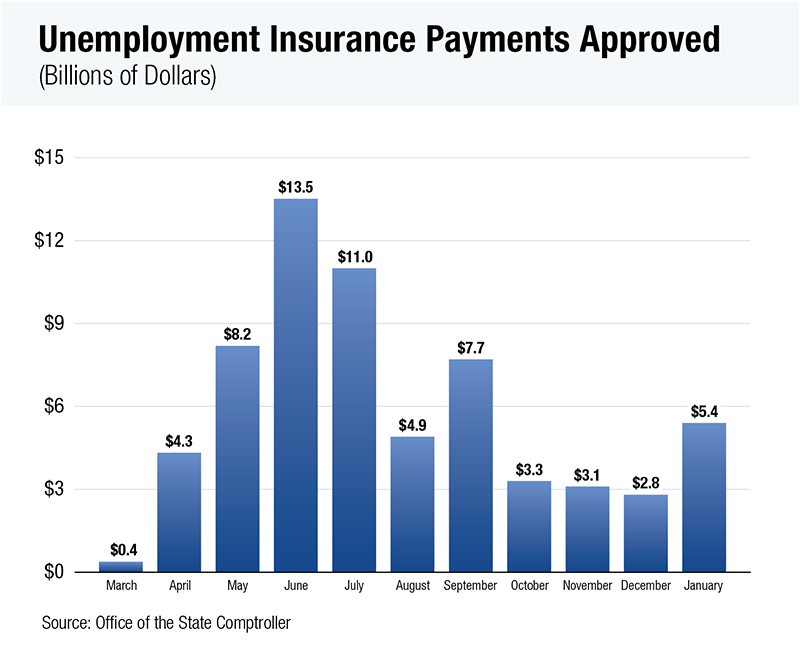 State tax receipts in January 2021 totaled $11.4 billion, 5 percent higher than those a year earlier. January collections were $1.7 billion higher than projected in the Executive Budget Financial Plan issued by the Division of the Budget (DOB) in January, as shown in the Comptroller's January cash report. Personal income tax collections during the month were 5 percent above those a year earlier, while sales tax receipts were down by 5.9 percent compared to January 2020. Through the first 10 months of the current fiscal year, total tax collections were down by $2 billion from the previous year.

The State’s General Fund balance was $19.2 billion as of February 12. The balance is driven partly by withheld payments as well as receipts from short-term borrowing that DOB anticipates repaying before the end of the fiscal year. The State has repaid $1 billion of that borrowing, with the remaining $3.4 billion due by March 31. 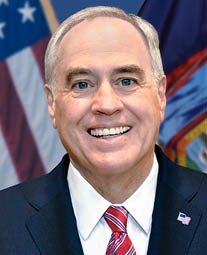