A year after the first case of COVID-19 was reported in New York State, the economic disruption caused by the pandemic remains severe. One key measure is the total number of New Yorkers claiming unemployment insurance (UI) benefits. As shown in the top line of the graph below, the figure remains elevated 11 months after the initial surge of job losses, with 2.4 million claims reported by the U.S. Bureau of Labor Statistics as of mid-February 2021.

Immediately before the pandemic hit New York, for weeks ending in late February and early March 2020, statewide UI claims averaged around 167,000. Those claims almost doubled to over 314,000, as the shutdown went into effect, starting a weeks-long upward spike that reached more than 3.1 million in mid-May. The historic peak of nearly 3.4 million claimants came in the last week of May 2020. The totals from May onward include claimants under the Pandemic Unemployment Assistance program (PUA) which provides benefits to individuals not traditionally eligible for unemployment assistance because of self-employment or certain other reasons. (Due to the PUA and other factors, the numbers of workers claiming unemployment benefits differ from the count of those officially counted as unemployed, which peaked in New York State at 1.5 million or 15.9 percent of the labor force in July 2020.)

The longstanding, regular State program of UI benefits funded by employer contributions was the only source of benefits for the first six weeks shown in the graph and continued to fund the largest numbers of claims into early August. (These payments were supplemented by additional federally funded benefits of $600 or $300 weekly for much, though not all, of the period shown.)

Pandemic Emergency Unemployment Compensation (PEUC), which provides continuing support to workers whose benefits would otherwise expire, became increasingly important starting in September, and PEUC claims soon surpassed those made under the regular State program. PEUC and PUA are entirely federally funded as part of the extraordinary relief and stimulus actions taken by Congress and the President.

The proportion of working-age New Yorkers who are actively in the labor force — the labor force participation rate (LFPR) — fell below 60 percent in 2020, to its lowest level since 1984.

Those who are counted as being in the labor force include both employed individuals and those who do not currently have a job but are seeking one. Working-age individuals may be out of the labor force because they are stay-at-home parents, persons with disabilities, caregivers, or full-time students, among other reasons. 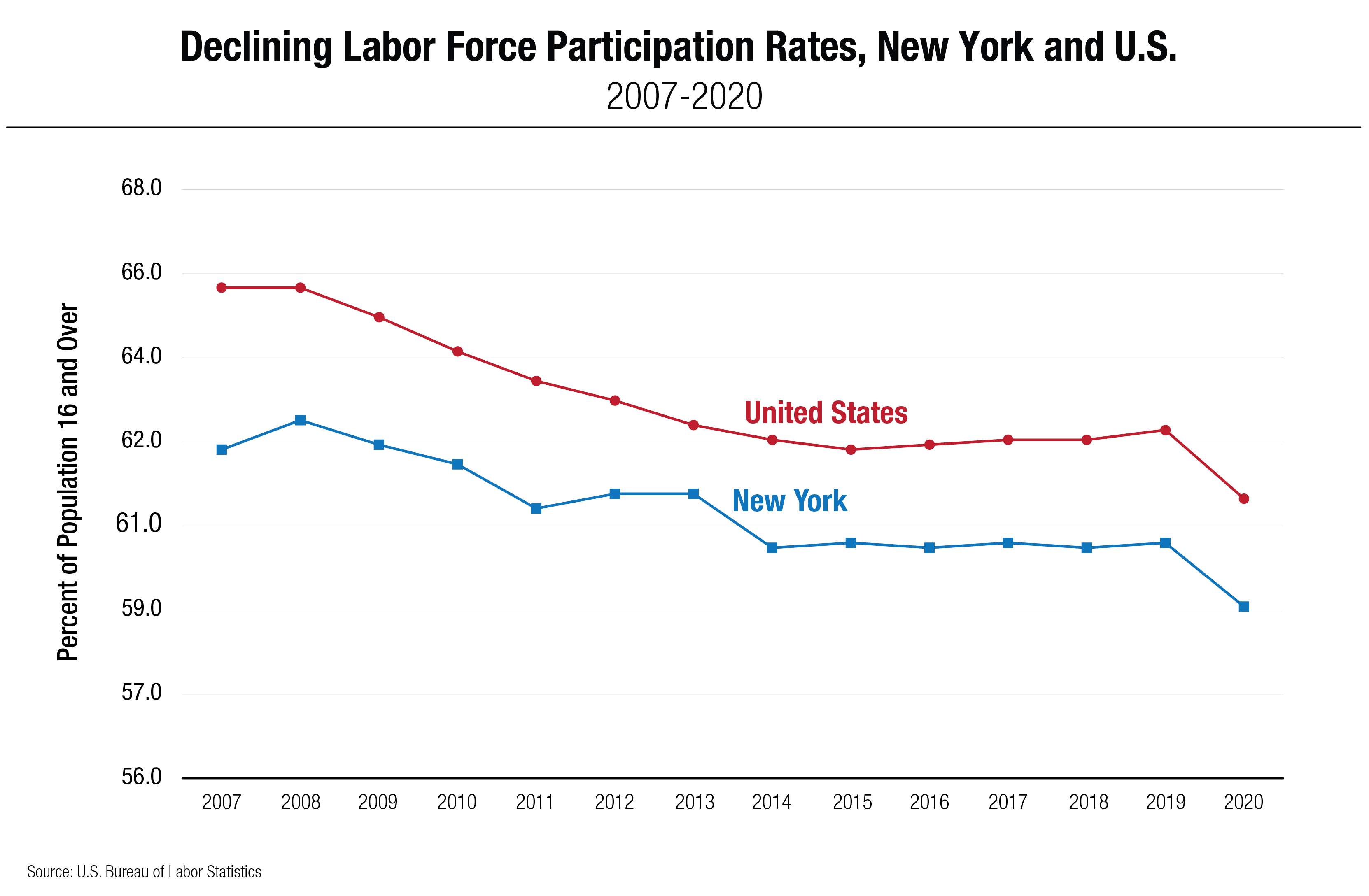 New York’s participation rate has lagged the nation’s for well over a decade. As shown in the figure above, both the national rate and New York’s LFPR had been stable for five years before the pandemic struck, and each declined by more than a percentage point over the past year.

As shown in a previous update, the declining number of individuals in the workforce has been a key factor in lower unemployment rates in recent months. Those who leave the workforce, particularly for extended periods, may experience long-term impacts on earnings. Women and minorities have been disproportionately affected by the recent trend of workers leaving the labor force.

Economists who analyze labor markets have pointed to an aging population and other factors as potential reasons for the longer-term decline in labor force participation. A 2017 report by the Office of the State Comptroller, Labor Force Trends in New York State, noted that continued shrinkage of the labor force could inhibit overall economic growth and contribute to budgetary challenges for the State and local governments.

Will Washington Provide Fiscal Relief for New York and Its Local Governments?

Potential budgetary relief for states and local government entities is among the key items being debated as the U.S. Congress and the Biden Administration negotiate the next federal relief and stimulus package in response to the COVID-19 pandemic.

Legislation passed by the House of Representatives on February 27 would provide $12.7 billion in unrestricted aid to New York State, according to the House Committee on Oversight and Reform, chaired by Representative Carolyn B. Maloney of New York. In addition, the bill includes an estimated $10.9 billion in budget relief for more than 1,000 local governments in New York, ranging from New York City to small towns and villages, according to the Committee. The City would receive an estimated $5.9 billion under the bill. These figures and those referenced below may change as a result of negotiations or other factors.

Among the largest counties outside New York City, the Committee estimates the following amounts of unrestricted aid would be distributed (see table below with estimates for all counties in New York State):

The Committee estimates that the City of Buffalo would receive $350 million under the House bill; Rochester, $207 million; Syracuse, $126 million; Yonkers, $89 million; and Albany, $85 million. Estimates for other larger cities and towns in New York appear in the table below.

The Committee also provides estimates for more than 950 smaller municipalities in New York State. A complete list of those estimates is available on the Committee website.

The State’s General Fund balance has been at historically high levels, over $19 billion, in recent weeks. The updated Executive Budget Financial Plan issued by the Division of the Budget (DOB) in mid-February projected that balance would be $20 billion at the end of February. As of February 26, the actual figure was $20.4 billion.

DOB has projected the State will end the current fiscal year on March 31 with a General Fund balance of $7.2 billion. Among other factors, that figure reflects the planned repayment of $3.4 billion in notes issued in 2020 for cash-flow purposes, and over $15 billion in local assistance payments estimated to be paid in March, including the release of not-yet-specified amounts previously withheld from municipalities, nonprofit organizations and other recipients. In addition, the updated Financial Plan indicates that $1.6 billion in debt service payments previously expected to be made in State fiscal years 2022-23 through 2024-25 will instead be made before the end of the current fiscal year. The end-of-year balance will also be affected by decisions on specific uses and timing of federal stimulus funds.

Comptroller DiNapoli said there are some positive developments for the State’s fiscal recovery from the pandemic, including higher than expected personal income tax collections and the prospect of significant aid from the federal government, in his review of the Executive Budget for State Fiscal Year 2021-22, as amended by the Governor. However, risks remain and could threaten the State’s fragile improvement. For the complete analysis, see the report.