DiNapoli: Local Sales Tax Collections Drop Over 32 Percent in May

Sales tax revenue for local governments in May fell 32.3 percent compared to the same period last year, according to State Comptroller Thomas P. DiNapoli. Sales tax collections for counties and cities in May totaled $918 million, or $437 million less than 2019.

The sharp decline in revenues was widespread around the state, ranging from a drop of 19.5 percent in Westchester County to a 41.5 percent decline in Tioga County. Nearly every county in every region of the state saw a large drop in overall collections. New York City experienced a 31.9 percent decline, amounting to $196 million in lost revenues for a single month. One major influence is consumers’ online spending, now largely subject to the sales tax. Detail on this activity is not currently available.

“We anticipated that sales tax revenues would continue to drop because of COVID-19 but the May sales tax figures show just how deep it is cutting into municipal finances,” DiNapoli said. “Sales tax revenues are vital funding not only for the state but for municipalities like counties and cities as well. The federal government needs to step up and provide financial help to states and local governments hit hard by this virus to avoid severe cuts to critical services.”

DiNapoli reported that local sales tax collections dropped 24.4 percent in April, or $327 million less than collected in that month a year ago, after relatively modest losses in March collections.

Over the three-month period of the pandemic’s effects, local governments have received $824 million (19.2 percent) less in sales tax revenue than they did during that same period in 2019. 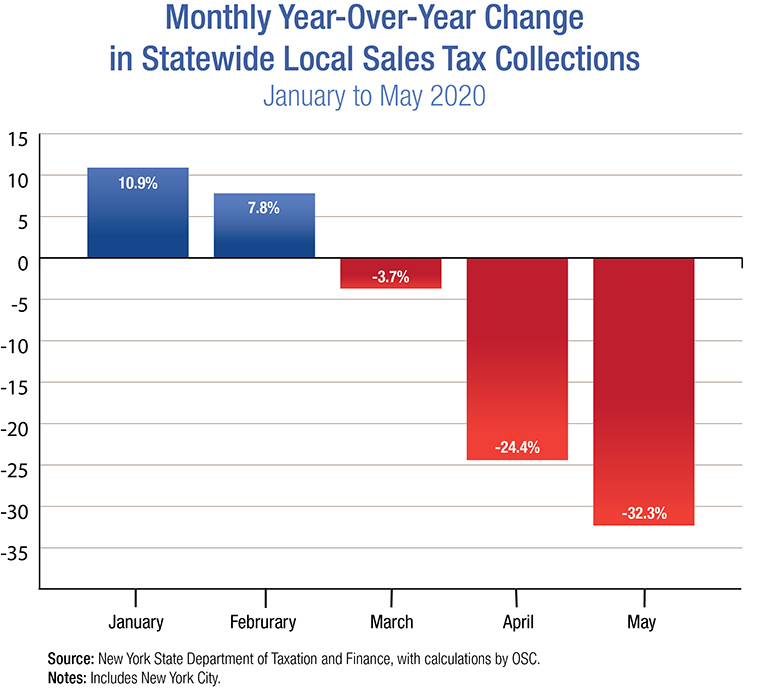