Collections Exceeded Both 2020 and Pre-Pandemic 2019 Levels

Local government sales tax collections in August were 15.5% higher than they were during the same period in 2020, making it the fifth consecutive month that collections exceeded 2020 results, State Comptroller Thomas P. DiNapoli announced today. Statewide, local collections totaled more than $1.5 billion, up nearly $204 million from August of last year.

“New York’s local governments continue to see much stronger collections in 2021 compared to last year when the pandemic kept people home,” DiNapoli said. “However, it remains uncertain how recent increases in statewide infection rates will impact the economy. Local governments must continue to monitor changing economic conditions and maintain vigilance when it comes to their finances.”

The double-digit growth in local sales taxes are notable in comparison to the fairly weak collections reported during August 2020 when sales activity was recovering in certain parts of the state from the early effects of the pandemic. Still, August 2021 total collections were strong even when compared to the figures reported during pre-pandemic levels, growing 6.5%, or nearly $93 million, over August of 2019.

New York City’s collections totaled almost $623 million, an increase of 7.9% or more than $45 million compared to August 2020. Every county outside of New York City saw year-over-year collections for August grow by double digits, ranging from 12.6% in Herkimer County to 76.3% in Delaware County. 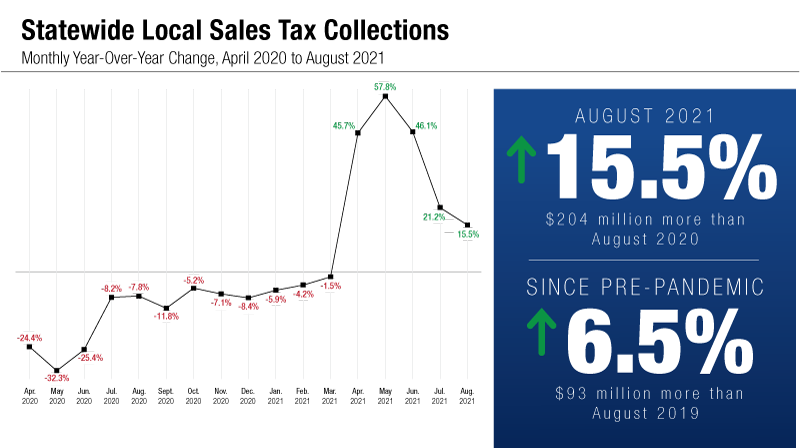 Source: New York State Department of Taxation and Finance with calculations by the Office of the State Comptroller
Note: Includes New York City

During the last month of each calendar quarter, the state Department of Taxation and Finance reconciles quarterly distributions against what had been reported by sales tax vendors for the reporting quarter and adjusts payments to local jurisdictions in those months upward or downward accordingly. During the other months, including August, the payments are based on estimates. The next reconciliation will be reported in mid-October and will provide more information on the regional picture of sales tax collections for the third quarter (July through September) of 2021.