DiNapoli’s Fiscal Stress Monitoring System was designed to identify issues that school districts, counties, cities (excluding New York City), towns or villages are having with budgetary solvency, or the ability to generate enough revenues to meet expenses. The Comptroller releases fiscal stress scores for the various categories of government three times a year. School districts are given a fiscal stress score based on several factors: year-end fund balance, operating deficits and surpluses, cash position, and reliance on short-term debt for cash-flow. 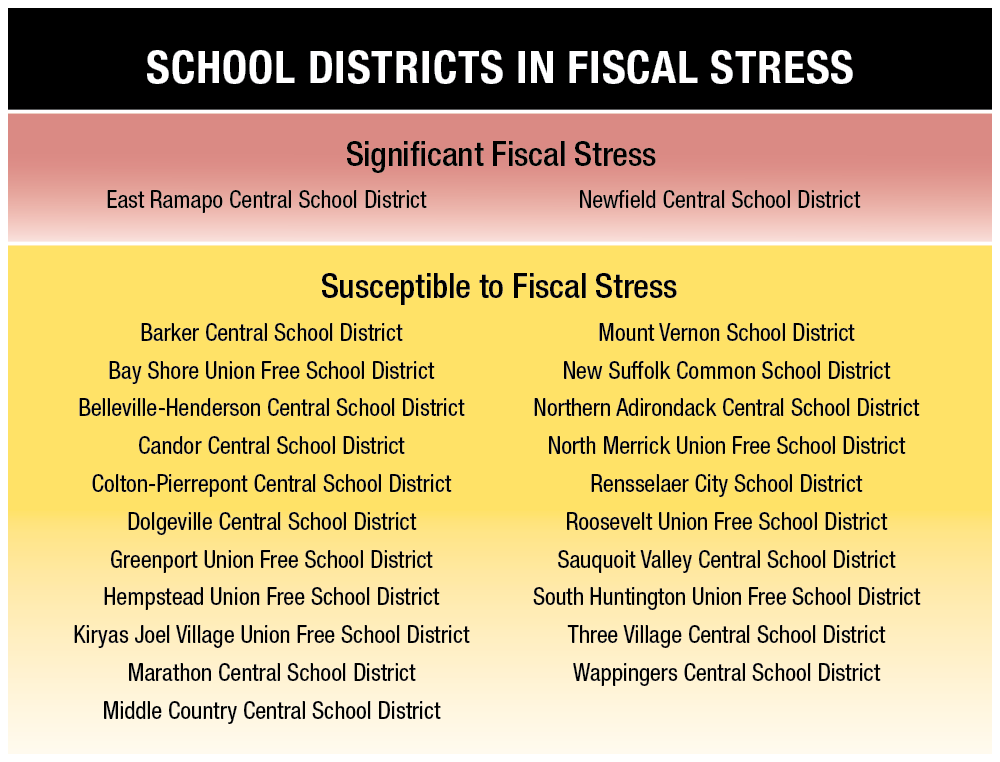 DiNapoli also released a report that examined the challenges that school districts faced in SY 2020-21, the first full year of operations under pandemic conditions. The report found:

The report also reviewed environmental risk factors, which can often increase the chance of fiscal stress, such as having a high percentage of economically disadvantaged students, a high teacher turnover rate, a decrease in local property values, a low budget vote approval rate, a high percentage of English language learners and a high student-to-teacher ratio.

DiNapoli’s report is based on districts that filed required financial information for the 2020-21 school year: 670 of the 672 school districts in 57 counties. Dryden Central School District in Tompkins County did not file its report in time to receive a score. The recently formed Boquet Valley Central School District in Essex County did not receive a score for SY 2020-21 because it only has two years of data, not the three years of data required.

DiNapoli notes that while federal and state aid for the 2021-22 school year alleviated some of the financial stress caused by the onset of the pandemic, the state’s property tax cap will limit levy growth for school districts at 2% next year. The tax cap, which first applied to local governments and school districts in 2012, limits annual tax levy increases to the lesser of the rate of inflation or 2%, with certain exceptions. School districts may override the cap with 60% voter approval of their budget.