New York’s labor force is one of the nation’s largest, but it decreased by 1% between 2011 and 2021 while the rest of the nation increased by 5.1%, according to a report released today by State Comptroller Thomas P. DiNapoli. A rebound took place in the latter half of the last decade before dropping significantly with the onset of the COVID-19 pandemic. New York continued to lose workers in 2021 when the rest of the nation began to recover. Even as the workforce began growing in 2022, it is still 400,000 workers below the state’s December 2019 peak.

“New York’s labor force is the backbone of our state’s economy, and its strength has been its diversity, high levels of education and unionization,” DiNapoli said. “But my report shows troubling long-term trends were exacerbated by the pandemic and may be impeding New York’s recovery. Challenges may lie ahead that could negatively affect economic growth and state and local tax collections. Policymakers must give attention to policies that foster labor participation and encourage workforce development.”

The U.S. Bureau of Labor Statistics defines the labor force as the portion of the working age population, 16 and over, that is either employed or officially considered unemployed – those who are not employed but have actively looked for work in the previous four-week period. In 2021, there were over 9.4 million New Yorkers in the work force, making up 5.8% of the national labor force and putting the state fourth in the U.S. behind California, Texas, and Florida. 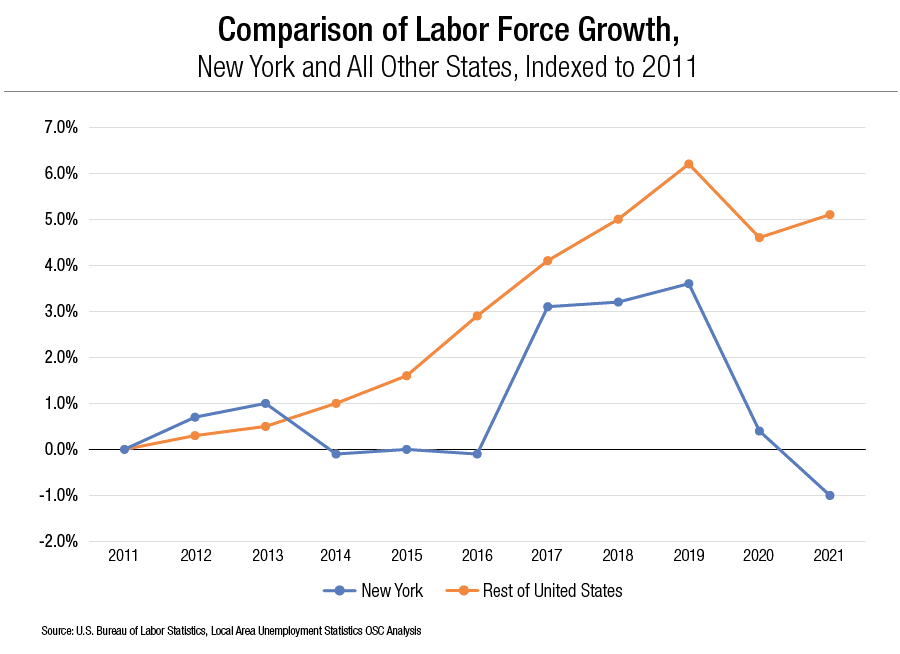 In New York, women comprised a larger share of the workforce (47.6%) than the rest of the nation (46.9%) in 2021. During the pandemic, men dropped out of the labor force in larger numbers than women. Even as the number of women in the workforce exceeded pre-pandemic levels in 2021, their participation rate (54.1%) remained significantly below that of men (65%) as women remain more likely to be stay-at-home parents and caregivers.

In the past 10 years, New York’s labor force with a bachelor’s degree or higher increased by 26.3%, growing by over 100,000 workers in 2020 alone. These workers were more likely to telecommute: 40.6% of those with bachelor’s degrees and 54.4% of those with advanced degrees nationwide worked from home due to COVID-19. However, New York’s labor force declined across all other education levels during this period. These shares dropped significantly for those with less than a four-year degree or just a high school diploma.