“There has been tremendous volatility in the markets in recent months, but thanks to the state pension fund’s diverse investments, it finished the year above our assumed rate of return,” DiNapoli said. “Still, the turmoil in the markets since Russia’s invasion of Ukraine has sent shockwaves through the financial world with repercussions that are ongoing. With inflation and supply chain issues continuing to impact the economy, we expect a challenging investment environment for the foreseeable future.”

The Fund's value reflects retirement and death benefits of $14.7 billion paid out during the fiscal year. Employer contribution rates are determined by investment results over a multi-year period along with numerous other actuarial assumptions, including wage growth, inflation, age of retirement and mortality. Integral to the Fund’s strength have been the state and local governments, which consistently pay their contributions.

The Fund’s long-term expected rate of return is 5.9%. The timing of the Fund’s annual valuation date is tied to the state fiscal year.

Every three years the Fund is required to undergo an independent Fiduciary and Conflict of Interest Review. The review, most recently performed by Kroll LLC, found the Fund “continues to be a leader amongst its peers for management and operational transparency.” 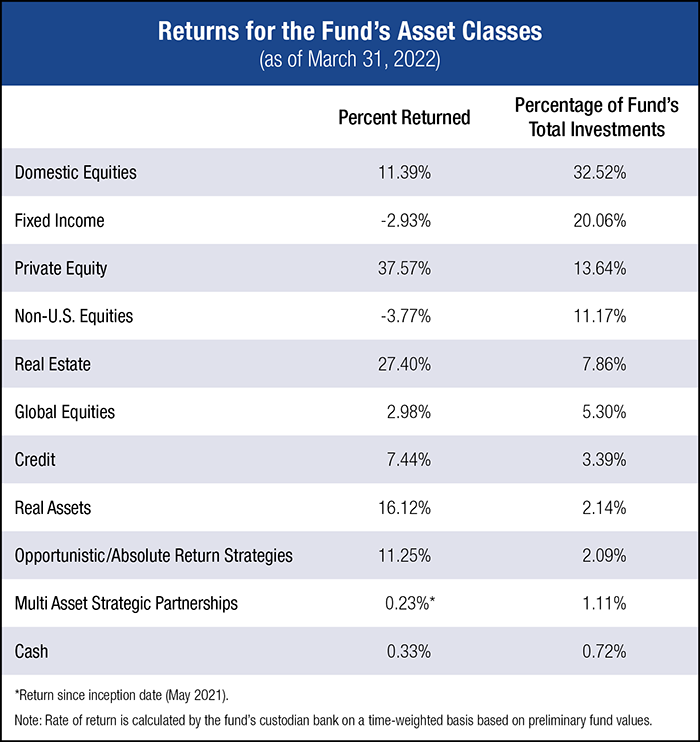 Fund’s historic value and rate of return in prior years

The New York State Common Retirement Fund is one of the largest public pension funds in the United States. The Fund holds and invests the assets of the New York State and Local Retirement System on behalf of more than one million state and local government employees and retirees and their beneficiaries. It has consistently been ranked as one of the best managed and best funded plans in the nation.