As our nation enters its ninth year of economic expansion, New York State faces some signs of increasing fiscal challenges.

The SFY 2017-18 Enacted Budget Financial Plan includes nearly $4.9 billion in non-recurring or temporary resources, excluding federal aid. The Division of the Budget (DOB) projects General Fund budget gaps in the coming three years will average more than $5.9 billion annually before potential gap-closing actions, partially reflecting the loss of the various temporary resources used in SFY 2017-18. While these projected gaps are smaller than those during the Great Recession, they represent an increase from more recent years and remain a cause for concern.

The Effect of the Two Percent Spending Benchmark Is Unclear

The SFY 2017-18 Enacted Budget Financial Plan again reflects the Executive’s 2 percent benchmark for annual spending growth in State Operating Funds. While DOB projects such spending growth to stay within the 2 percent benchmark in SFY 2017-18, it projects all other measures of State spending—General Fund, State Funds and All Funds—to exceed the 2 percent benchmark. Furthermore, that figure reflects several actions that complicate the picture of year-over-year spending growth. Such actions include: the use of prepayments; certain program restructurings, which result in costs being reflected as reduced receipts rather than disbursements; shifting spending to capital projects funds; deferring expenditures to future years; and the use of off-budget resources to pay for certain program costs. After considering such identifiable actions, the Office of the State Comptroller estimates that State Operating Funds expenditures this year would increase by approximately 4 percent. The effect of the 2 percent benchmark is unclear since it is achieved, in part, by use of these actions, which may limit reported State Operating Funds disbursements and growth without lowering actual costs.*

The Executive currently projects that the State’s debt capacity, as measured by the statutory cap on State-Supported debt outstanding issued after April 1, 2000, will shrink to just $88 million by SFY 2020-21. Certain actions, such as a change in the financing structure for State University of New York dormitories, preserved debt capacity under the statutory cap but did not alter the State’s debt burden. Average annual State-Supported debt issuance over the last five fiscal years is nearly 30 percent lower than average annual debt issuance from the previous five year period (SFYs 2007-08 through 2011-12). While this has helped keep debt outstanding below the statutory cap, the challenge of addressing the State’s debt burden remains.

Since statutory debt capacity is partially a function of personal income in New York State, the projected level of such capacity varies with different personal income projections. DOB projects personal income in New York State will increase an average of 4.5 percent annually over the next five years. Some other economic forecasts vary from DOB projections. For example, the consulting firm IHS Markit projects a lower figure, an average of 4.3 percent over the same period. If personal income grows at a lower rate than anticipated and additional actions are not undertaken, the State’s projected statutory debt capacity would shrink further or, potentially, disappear entirely. 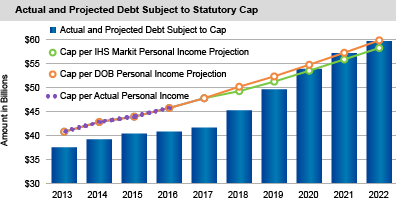 Since April 2014, the State has received over $10.2 billion in monetary settlements from various financial and other institutions for violations of New York State banking, insurance or other laws. The Financial Plan indicates an intent to use the majority of settlement funds for capital investments and other one-time purposes. However, the State is also using settlement funds for cash flow and debt management purposes that are presented as temporary in nature. The flexibility of these resources and their use for ongoing purposes may obscure the State’s underlying fiscal position and create uncertainty regarding other commitments.

DOB projects that roughly 78 percent of settlement dollars ultimately will be spent through the Dedicated Infrastructure Investment Fund, transferred to the Environmental Protection Fund (a capital projects fund), or used for mass transit or health care purposes. However, through the end of SFY 2016-17, nearly half (49.4 percent or almost $1.6 billion) of what has actually been spent has gone to budget relief, and another $461 million is planned for such use in SFY 2017-18.

Also, $2.3 billion of these resources are being used in ways that allow the State to preserve debt capacity in the short-term, while allowing capital spending to continue. This plan leaves greater uncertainty for the currently appropriated uses of settlement resources. Furthermore, some settlement dollars have been appropriated for broadly written purposes. It is not yet clear whether all or the majority of these one-time resources will be used appropriately for capital investments or other one-time purposes. Ensuring that the State meets its needs for essential capital investment, and that it makes appropriate use of one-time resources such as settlement funds, remain important priorities.

The General Fund cash balance as of March 31, 2017 was $7.7 billion. That figure is substantially higher than the levels in the period during and immediately after the Great Recession, largely reflecting monetary settlements received in the past three years. But the State’s budgetary cushion is shrinking: the Enacted Budget Financial Plan projects that the General Fund balance will be one-third lower at the end of the current fiscal year than its recent peak two years previously, and such reserves are projected to decline further in each year through SFY 2020-21.

The State has increased its reserves over the last 10 years, largely due to deposits in SFY 2014-15 of over $315 million to the Rainy Day Reserve Fund that was created in 2007. However, no additional deposits have been made since, and the current Financial Plan doesn’t anticipate any in the future. The State’s General Fund balance as of March 31, 2017 was 11.4 percent of expenditures, primarily because of non-recurring monetary settlement revenue received since April 1, 2014. If the monetary settlements were excluded from the balance, the General Fund balance would have been 3.5 percent of General Fund spending, significantly lower than the national average as well as the average for the other 10 largest states with rainy day funds. However, when including settlement funds, the General Fund balance as a percentage of expenditures exceeds both the national average and the average for the 10 largest states with rainy day reserves. 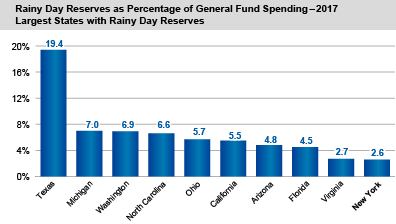 The State faces substantial reductions in federal aid for health care and other programs if proposed changes at the federal level are enacted. DOB currently projects the State will receive $57.2 billion in federal funds for various programs in the State budget, representing an increase of 3.2 percent from SFY 2016-17. Given that federal funding represents approximately one-third of the State’s revenue, the unpredictable nature of federal budget and policy discussions presents an elevated concern. Medicaid receives the largest share of federal funds in the State’s budget. However, the State also uses federal resources for other purposes including transportation, education, environmental protection and various social services. While the SFY 2017-18 Enacted Budget includes provisions to help address potential federal funding reductions at the State level, it leaves uncertainty regarding fiscal and programmatic repercussions for recipients of State funding if such provisions are implemented. 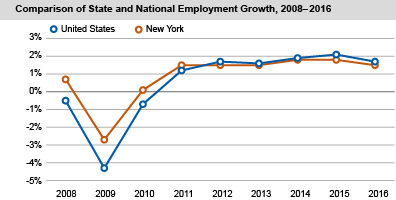 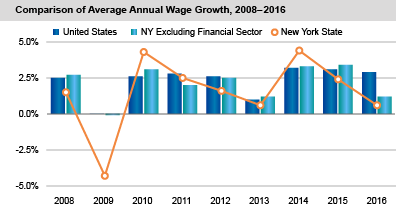