While no municipalities were in the highest category of “significant fiscal stress,” 73 villages and cities have not filed their financial information, as required. These scores also largely reflect the period when local governments in New York received federal relief funds to assist them in recovering from the COVID-19 pandemic.

“The financial landscape for many local governments has improved with the infusion of federal aid and stronger economic activity,” DiNapoli said. “The relief funds are temporary, so it is critical that local communities make changes, including carefully managing debt and engaging in long-term planning, that help improve their financial outlook for years down the road.”

The latest round of fiscal scores evaluated local governments with fiscal years ending between Feb. 28 and July 31. DiNapoli’s office evaluated the fiscal health of 522 villages, which predominantly have a fiscal year ending on May 31, based on self-reported data for 2021. The scores also cover the 17 cities with non-calendar fiscal years, including the “Big 4” cities of Buffalo, Rochester, Syracuse and Yonkers, each of which have fiscal years ending on June 30. 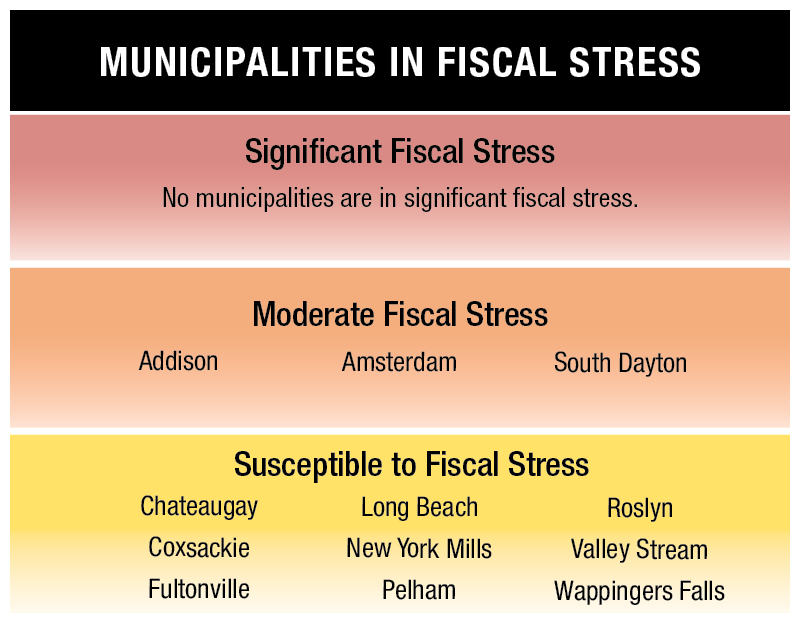 The system, which has been in place since 2012, assesses levels of fiscal stress in local governments using financial indicators including year-end fund balance, cash position, short-term cash-flow borrowing and patterns of operating deficits. It generates overall fiscal stress scores, which ultimately drive final classifications. The system also analyzes separate environmental indicators to help provide insight into the health of local economies and other challenges that might affect a local government’s or school district’s finances. This information includes population trends, poverty and unemployment.

DiNapoli’s office also has a self-assessment tool that allows local officials to calculate fiscal stress scores based on current and future financial assumptions. Officials can use this tool to assist in budget planning, which is especially helpful during periods of revenue and expenditure fluctuations.

In January, DiNapoli released fiscal stress scores for school districts. In September, his office will release scores for municipalities with a calendar-year fiscal year, which includes all counties, towns, most cities and a few villages.