Nearly 30 percent of all New York households expect a loss of employment income within the next four weeks, according to new data from the Census Bureau’s Household Pulse Survey.

Among other indicators of continuing financial struggles, nearly a quarter of New Yorkers surveyed said that it’s likely or somewhat likely that an eviction or foreclosure will happen to their household within the next two months. In addition, one-third said that it has been somewhat difficult or very difficult to pay for usual household expenses during the pandemic.

Among adult New Yorkers pursuing a postsecondary education, 83 percent said their plans for classes this fall have been canceled or changed significantly.

Layoffs and Discharges in the Northeast Are at Pre-Pandemic Levels

New data from the Job Openings and Labor Turnover Survey (JOLTS) by the Bureau of Labor Statistics (BLS) highlight the ongoing churn in employment during the COVID-19 era.

The Northeast Region suffered more than 3.8 million layoffs and discharges in March and April, on a seasonally adjusted basis, as shown in the nearby chart. (BLS defines the region as including Connecticut, Maine, Massachusetts, New Hampshire, New Jersey, New York, Pennsylvania, Rhode Island, and Vermont; data are not available at the state level.) Figures for May, June and July (including 295,000 layoffs and discharges in the latest month) were more in keeping with pre-pandemic levels.

Hirings in the Northeast Region fell in March, and then more sharply in April. July hirings of just over 1 million were down from June but 98,000 above those of July 2019. Reported job openings of more than 1.1 million in July were the strongest since February.

The JOLTS regional data do not provide insight into types of jobs or compensation levels for job openings, hires and layoffs/discharges. 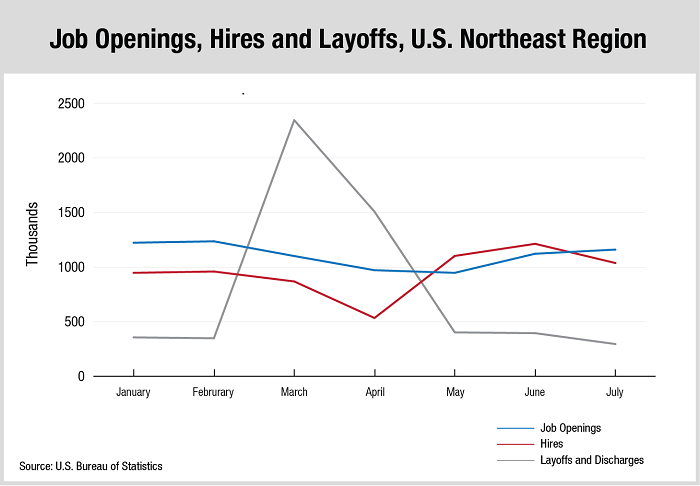 State tax revenues continued to show year-over-year declines in August. Total tax receipts of $4.3 billion were $219 million or 4.8 percent below those of August 2019. For the first five months of the fiscal year, tax revenues have totaled $3.2 billion below the previous year. These latest figures again highlight the severe budgetary impacts of the COVID-19 pandemic, presenting difficult choices for policy makers if the State does not receive significant additional relief from the federal government.

Total State spending through August was $2.5 billion below the same period in 2019. Year-over-year declines in Local Assistance disbursements totaling $1.9 billion include $591 million in Medicaid (reflecting a lower State share offset in part by a higher federal share), $368 million in education and $321 million in transportation.

The State’s General Fund balance was $12.8 billion as of September 11, an increase of $34.6 million from a week earlier. Among other factors contributing to that balance are $4.5 billion in proceeds from short-term borrowing that is anticipated to be repaid before the end of the fiscal year, and more than $1.9 billion in delayed payments to local governments, nonprofit organizations and other entities.

The federal CARES Act provided $5.1 billion to New York State through the Coronavirus Relief Fund. As of September 11, the State’s CARES Act Fund held a balance of just under $4 billion. A total of $1.1 billion had been spent as of that date.

As of September 10, 62.3 percent of New York households provided a self-response online, by phone, or by mail, lagging the national figure of nearly 66 percent. More information is available at the Office of the State Comptroller’s website, including county by county self-response rates and self-response rates by neighborhood in New York City.

Including households counted by census takers, 92 percent of New York’s households have been enumerated as of September 13. Figures for all states are available via the Census Bureau website.