Unfortunately, a deeper dive into the Bureau of Labor Statistics data reveals troubling context: New York State’s workforce declined by nearly 363,000 last month, a 2.3 percentage point drop from August (based on preliminary figures), while the number of individuals officially considered unemployed declined by 302,000. In short, the unemployment rate went down in large part because of the decline in New Yorkers counted as working or seeking employment. Such a decrease in the size of the workforce may indicate that individuals have ceased searching for a job actively.

New York also led all states in September job gains, at 109,300. Again, the picture is complex; at the same time, the number of employed people in the State fell by more than 60,000. Increasing numbers of New Yorkers working more than one job (perhaps part-time or temporary) may be one factor in those changes.

From March 1 through October 23, the Office of the State Comptroller has approved payments for nearly $52.5 billion in unemployment benefits and related lost wages assistance supplements to workers in New York—a financial lifeline for recipients and an important boost to an economy that has been hit hard by the COVID-19 pandemic.

More than 2.4 million New Yorkers claimed benefits under three separate programs during the week ending October 3, more than 10 percent of the nationwide total, according to U.S. Department of Labor data. These included 1.2 million receiving benefits under the federally funded Pandemic Unemployment Assistance (PUA) program, one of several programs created as part of the federal CARES Act enacted in March 2020. PUA was designed to cover certain individuals not eligible for traditional unemployment benefits, while the Pandemic Emergency Unemployment Compensation (PEUC) and the Federal Pandemic Unemployment Compensation (FPUC) programs increased the duration and amount of unemployment benefits, respectively. The statewide total also includes more than 600,000 in the longstanding state-federal unemployment insurance program, and 537,000 receiving PEUC.

The flow of these benefits has slowed in recent months, as shown in the graph below. 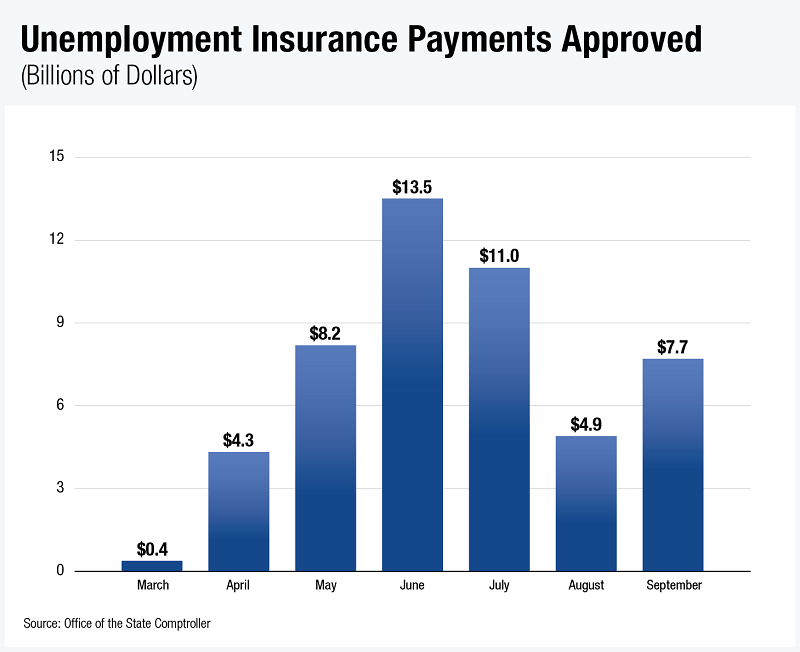 Weekly payments approved by the Office of the State Comptroller peaked at more than $3.5 billion in June. Approved payments jumped again for two weeks in September related to the Lost Wages Assistance (LWA) program (a $300 weekly supplement to unemployment assistance), but to a lesser extent than the June peak. In recent weeks, such payments have been between $700 million and $875 million each week—still far above historical levels, but a diminished amount of help to those in need and a smaller boost to the statewide economy. The decline follows a partial rebound in employment in recent months, as well as the expiration of FPUC, which provided an additional $600 weekly for many recipients through the end of July and the end of the LWA program in September. That program went into effect on August 1 and ran through September 5; however, the State did not begin to make these payments until mid-September.

As currently authorized, PUA and PEUC will provide benefits through December 31. Without additional action by Congress, these essential supports for many New Yorkers will end, likely well before the State’s economy recovers from the current downturn.

The number of Temporary Assistance (TA) recipients statewide has continued to climb from the onset of the COVID-19 pandemic through July, according to the latest available data. However, there has been a notable difference in how aid was disbursed geographically. Only 19 of the 57 counties outside of New York City (the rest-of-state) saw increases in TA recipients from March to July 2020. Overall, the number of recipients in the rest-of-state decreased nearly 2 percent during the period. In both Erie and Onondaga counties, counts of beneficiaries fell by more than 1,000, according to Office of Temporary and Disability Assistance data.

In contrast, all five counties in New York City experienced increases in recipients, for an aggregate increase of 11 percent in the City. Factors in this disparity between New York City and most other regions in the State are not immediately clear. 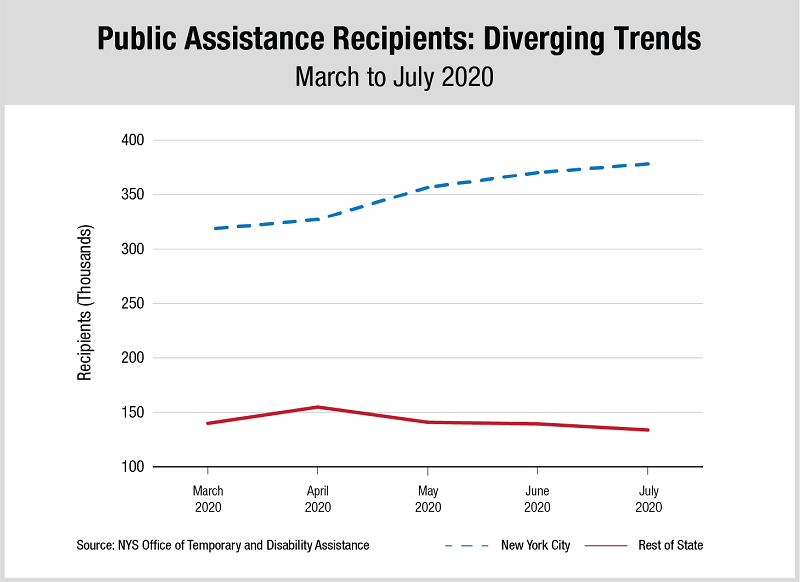 In a related issue, food scarcity continues to be an issue for New Yorkers. For the week ending on October 12, according to the Census Bureau’s Household Pulse Survey, one out of ten households in the State responded that they had experienced an inadequate amount of food to eat within the last seven days. This level has fluctuated some over the past two months, as estimates of New York households experiencing a food shortage have ranged between 210,000 and 295,000.

The U.S. Treasury Department has provided further flexibility for state and local governments to use Coronavirus Relief Fund (CRF) resources. In updated information released on October 19, the Treasury authorized use of CRF allocations to offset refunds to public university students for tuition, room and board, meal plans and other fees. New York State received $5.1 billion through the CRF. As the Office of the State Comptroller has reported previously, increased flexibility provided by the Treasury may allow the State to reduce General Fund costs from levels currently anticipated by the Division of the Budget (DOB), freeing up resources for other purposes and potentially reducing the current year’s budget gap.

State tax receipts were $922 million above the latest DOB projections in September, according to Comptroller DiNapoli’s monthly cash report. Yet, midway through the fiscal year, cumulative tax receipts were still $2.8 billion below those a year earlier. The Comptroller commented: “Washington must get its act together and help states and local governments weather this economic storm.”

The State’s General Fund balance was $16.4 billion as of October 23. Among other factors contributing to that balance are $4.4 billion in proceeds from short-term borrowing that is anticipated to be repaid before the end of the fiscal year, and more than $2.2 billion in delayed payments to local governments, nonprofit organizations and other entities.