After losing more than 1.9 million jobs in March and April, New York State saw steady gains, averaging over 174,000 jobs in each of the following five months. That progress nearly halted in October, when statewide employment rose by less than 11,000. That brought the State’s job total to nearly 8.8 million, a cumulative increase of 881,000 since April—but, still, nearly 1.1 million below pre-pandemic levels in February.

From a regional perspective, New York City lost approximately 938,000 jobs in March and April, almost half the statewide total. As a percentage of February employment, however, the downstate suburban region took a sharper hit, experiencing a decline of more than 21 percent compared to 20 percent in the City and 18.1 percent in the rest of New York State. As of October, the downstate suburbs had recovered at a faster rate than the other two regions, recouping over 58 percent of lost jobs, as shown in the nearby chart. New York City saw only slight job gains in the month of October, while the rest of the State lost more than 14,000 jobs. 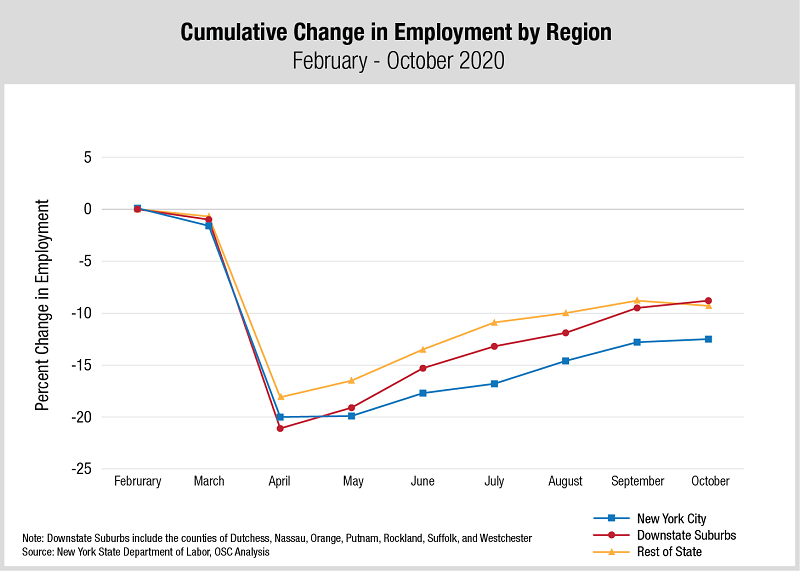 Of the State’s nearly 1.1 million net jobs lost from February through October, over 344,000 or almost one-third were in the leisure and hospitality sector. This includes jobs in the arts and recreation, such as theaters, spectator sports and museums, as well as those in restaurants and hotels. The health care and social assistance industry, the State’s largest employment sector, accounted for over 10 percent of job losses. Many jobs in these industries are relatively low-paid compared to other sectors, as the Office of the State Comptroller has noted previously. Meanwhile, professional services, with many higher-paid jobs, ranked second for net job loss, with a decline in excess of 155,000 over the period. The chart below illustrates the distribution of the State’s job losses across major sectors.

Unemployment Benefits Remain a Financial Lifeline–But for How Long?

Unemployment benefits have provided urgently needed financial support for millions of New York workers in recent months. As of the two weeks ending October 31 and November 7, more than 2.3 million New Yorkers claimed benefits under two federal programs created in response to the COVID pandemic and the longstanding, regular unemployment insurance (UI) program, as detailed below. Since March 1, the Office of the State Comptroller has processed unemployment assistance payments totaling more than $56 billion, including $687 million during the week of November 23. While New York State has regained 45 percent of the more than 1.9 million jobs lost in March and April, high levels of continuing unemployment claims and unemployment payments are among the key indicators of the lingering, serious economic challenges facing many New Yorkers.

As of mid-November, New Yorkers had received almost $36.7 billion from the UI benefit expansions created by Congress earlier this year, including the $600 weekly additional benefit for claimants which expired at the end of July. The two newly established federal programs, Pandemic Unemployment Assistance (PUA) and Pandemic Emergency Unemployment Compensation (PEUC), expire at the end of December unless extended by further Congressional action. For the week ending October 31, more than 1.2 million New Yorkers claimed PUA benefits, which are available to self-employed individuals and certain other workers not eligible for traditional UI benefits. More than 680,000 claimed PEUC assistance, which provides 13 weeks of additional benefits to workers eligible for the traditional program.

With little progress toward further stimulus and relief legislation in Washington, families and individuals currently depending on these two programs face enormous uncertainty heading into the year-end holiday season. The potential loss of such economic support is especially troubling given the slowing jobs recovery in October and increasing rates of coronavirus infections. Meanwhile, another 449,000 New Yorkers claimed UI benefits under the regular State program during the week ending November 7 (the latter program reports updated numbers of claimants a week earlier than the federal programs).

While PUA and PEUC are entirely federally funded, New York State employers pay UI taxes to support the traditional unemployment program. The State Department of Labor collected $2.34 billion and $2.14 billion of UI taxes in 2018 and 2019, respectively, and $1.85 billion through September 30, 2020.

New York State has drawn UI funding advances from the federal government’s Unemployment Trust Fund (UTF) to meet the extraordinarily high number of claims in the State. The State’s outstanding balance owed to the federal government from these loans was more than $8.5 billion as of November 16. That amount must be repaid, which may result in higher UI costs for New York employers in coming years unless Congress provides new funding to offset such costs.

The Census Bureau’s Small Business Pulse Survey has been collecting data for over six months on the challenges small businesses are facing during the COVID-19 pandemic. The Office of the State Comptroller has previously reported in July, August, and September on how small businesses in New York State have been impacted. According to the most recent data, for the week ending November 22, New York’s small businesses reported greater overall negative impacts from the pandemic, along with greater expectations of such impacts lingering for months to come, than most other states.

Nearly 54 percent of New York small businesses believe more than six months will pass before the business returns to its normal level of operations relative to a year ago, compared to just over 47 percent nationally. Another 10 percent of respondents in New York do not believe the business will ever return to its normal level of operations, 2.4 percentage points higher than the national figure.

Nearly one in three New York small businesses expect they will need to obtain financial assistance or additional capital in the next six months, while more than 17 percent believe they will need to identify and hire new employees.

The State’s General Fund balance was $12.6 billion as of November 27. Among other factors contributing to that balance are $4.5 billion in proceeds from short-term borrowing that is anticipated to be repaid before the end of the fiscal year, and more than $2.6 billion in delayed payments to local governments, nonprofit organizations and other entities.

The balance in the CARES Act Fund, where the State has deposited its $5.1 billion in proceeds from the federal Coronavirus Relief Fund (CRF), has remained approximately $3.8 billion with little change since mid-October pending further action by the Division of the Budget (DOB). The Financial Plan anticipates offsetting roughly $500 million in General Fund costs for public health and public safety personnel expenses with resources from the fund (which is outside the General Fund). However, DOB has identified $2.7 billion in payroll costs for such employees as eligible for CRF funding, among a total of nearly $7 billion in eligible expenses. These funds could make a substantial contribution to closing this year’s projected budget gap, as full use of the CRF resources is not yet fully anticipated in the Financial Plan.

State tax revenues for the fiscal year to date totaled $43.8 billion through October, $3 billion lower than the same period in the previous year, according to the monthly State Cash Report released by Comptroller DiNapoli. Tax receipts in the month of October were $320.1 million higher than DOB’s projection in August, but $432.9 million below the revised projection contained in its Mid-Year Update issued in late October. (While DOB did not change its projections of tax receipts for the full 2020-21 fiscal year in the Mid-Year Update, it revised estimates for the remaining months of the fiscal year, including an increase of $753 million in anticipated October tax receipts from its August projection.)