Unemployment rates for New York State, New York City and the balance of the State spiked upward in April 2020. At that point, and in the months immediately before, the percentages of officially unemployed workers in the City and in the rest of the State were nearly identical — but those numbers have since diverged sharply.

As shown in the chart below, the average unemployment rate for the balance of the State, excluding New York City, dropped to 5.9 percent as of December, about a percentage point above pre-pandemic levels and below the national rate of 6.7 percent. In New York City, the December rate was almost twice the average elsewhere in the State. As discussed below, hospitality and restaurant employment in the City has been hit especially hard; New York City’s economy is heavily reliant on the presence of tourists and a large commuter population, which has not yet returned. Outside the City, December unemployment rates for metropolitan areas ranged from 4.3 percent in Ithaca to 7.5 percent in Buffalo-Niagara Falls, according to the State Department of Labor. Unemployment rates are driven not only by employment, but also by the proportion of working-age individuals actively looking for work — which has dropped in New York and nationwide since the start of the pandemic. 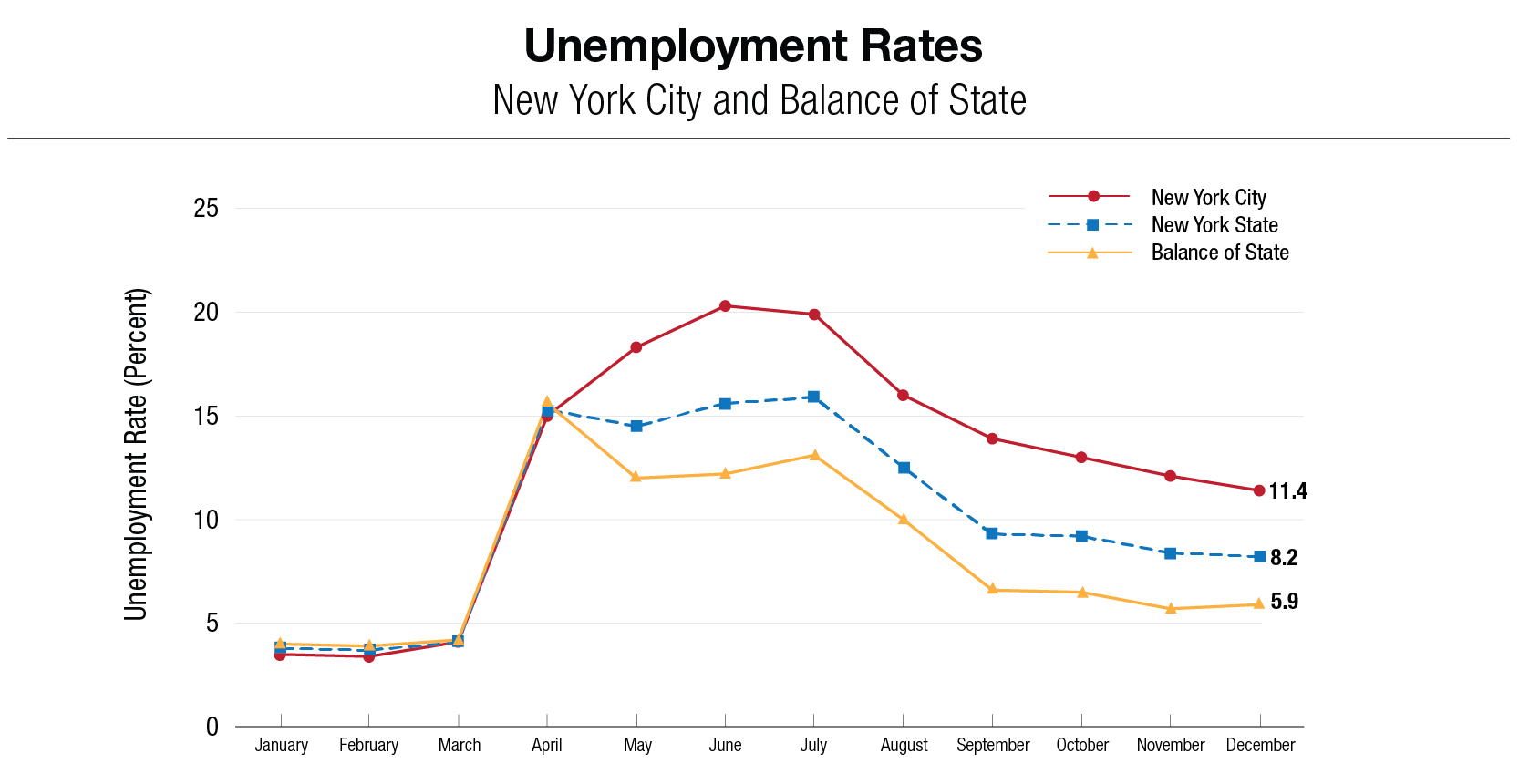 In New York City, job losses have been especially severe for workers in sectors with lower average annual salaries. The City has suffered larger employment declines than the balance of the State in leisure and hospitality, other services, and retail. 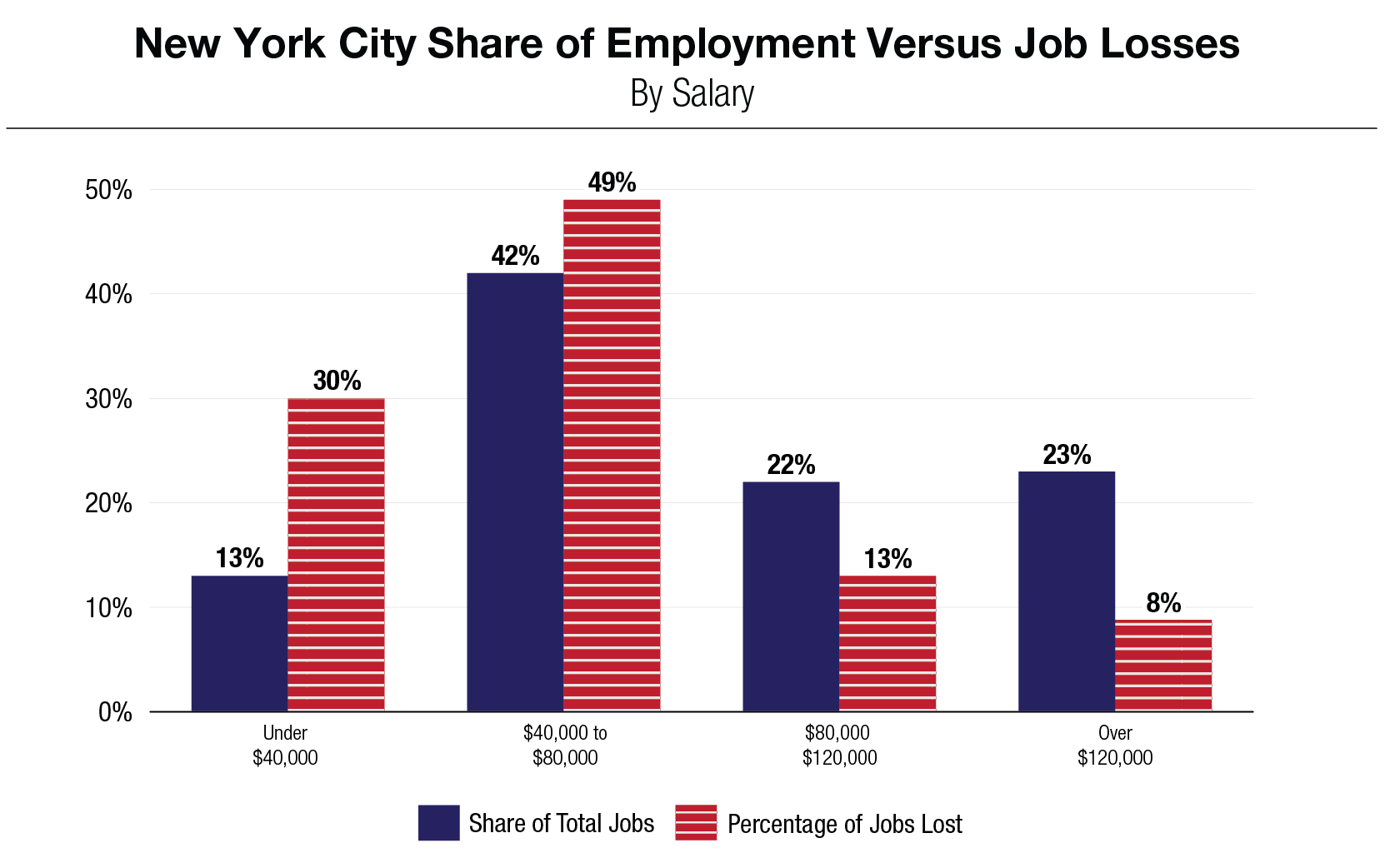 The number of New Yorkers claiming unemployment benefits remained at over 2.4 million at last count, a slight increase of nearly 7,500 claimants from figures reported in the previous week. This included 1.3 million people filing under the Pandemic Unemployment Assistance program and 668,000 through Pandemic Emergency Unemployment Compensation (both federal programs, with figures for the week ending January 9). Another 440,500 New Yorkers claimed benefits under the regular State program for the week ending January 16.

From March 1, 2020, through January 29, 2021, the Office of the State Comptroller has approved more than $64.6 billion in unemployment insurance payments. That compares to a total of $2.1 billion during calendar year 2019.

The Executive Budget for the coming fiscal year relies on a range of actions to respond to the pandemic as well as to eliminate a looming budget gap —  spending cuts, new revenues, use of fund balances and increased borrowing —  demonstrating the need for significant federal aid, according to an initial analysis issued by Comptroller DiNapoli. The Comptroller’s report noted that federal funds are being used to pay for operating expenses typically covered by the General Fund, which could lead to greater out-year gaps and worsen the State’s structural imbalance between revenue and spending. He also questioned whether certain debt proposals were necessary. Comptroller DiNapoli commented: “The consequences of the pandemic will be with us for a long time and federal funds have been essential in shoring up the State’s finances, but more is needed. While the outlook for State tax revenues has improved somewhat, any shortfall in anticipated federal assistance would drive undesirable budgetary choices that hurt New Yorkers.”

New York State will likely receive at least an additional $1.5 billion in federal Medicaid funding, beyond the amount projected in the Executive Budget Financial Plan, for a total of $6 billion or more in previously unplanned aid for the coming fiscal year. As part of stimulus and relief legislation enacted in March 2020, Washington provides a 6.2 percent increase to each state’s federal Medicaid matching rate beginning January 1, 2020. The Financial Plan, issued on January 19, anticipates that such funding will extend through June 2021, providing a total of $4.5 billion to the State budget and more than $900 million to New York City and counties across the State. However, in a letter to governors dated January 22, the U.S. Department of Health and Human Services informed states that the federally declared COVID-19 public health emergency, which drives continuation of the enhanced federal aid, “will likely remain in place for the entirety of 2021.” That would generate at least an additional $1.5 billion in aid for the State, and at least $485 million for New York City and counties beyond the amounts previously expected (see the Comptroller's January 21 update for additional background on the impact for localities).