While Some New York Industries Are on the Path to Recovery, Others Are Not

Job losses from the pandemic and the ensuing economic shutdown were swift and deep: employment in New York declined by nearly 2 million jobs from February to April 2020. New data released by the State Department of Labor show less than half of the jobs lost during that time have been recovered, and employment is still more than 1 million jobs below its pre-pandemic levels. In February 2021, total non-farm employment in New York increased only slightly, by a net of 3,700 jobs, compared to a net 45,300 jobs added in January.

The leisure and hospitality sector was the most significantly impacted by the economic shutdown, suffering 30 percent of the State’s total employment decline despite representing only 9.8 percent of total employment. Jobs within this sector have low average annual wages. Fortunately, since May 2020, the leisure and hospitality sector has recovered the largest number of jobs, nearly 260,000; however, these gains represent only 43 percent of the jobs lost in the industry. A recent Comptroller’s report details the impact of the pandemic on arts and cultural institutions in New York City. Recent news of plans to reopen Broadway theaters in September may accelerate recovery in this sector.

The construction industry is farthest along in its recovery, regaining nearly three-quarters of the jobs lost. Job growth has also been strong in retail trade and health care and social assistance, which gained 170,700 and 143,200 jobs, respectively; these gains represent 67 percent and 59 percent of jobs lost, respectively. On the other hand, the information industry has regained just 16 percent of jobs lost, though it suffered comparatively few losses. (See the graphs for more employment data by sector.)

Even as overall job growth has resumed in New York, some industries — educational services, government, and financial activities — have continued to lose jobs. The high-wage finance and insurance industries, within the broader category of financial services, lost about 7,000 jobs since May 2020, in addition to the 8,100 job decline in March and April, on a seasonally adjusted basis. 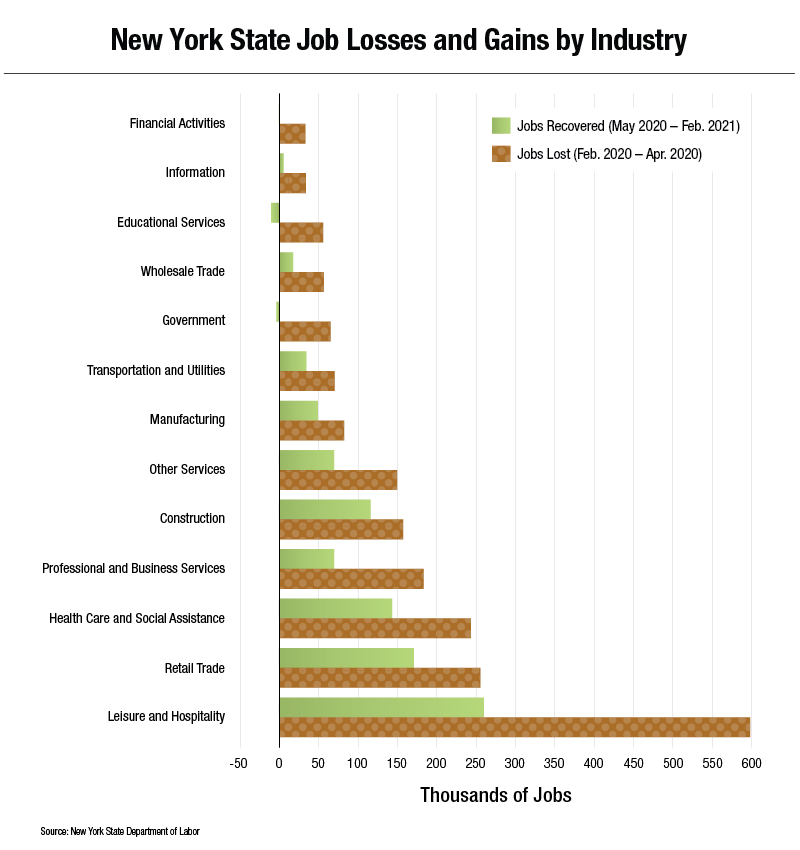 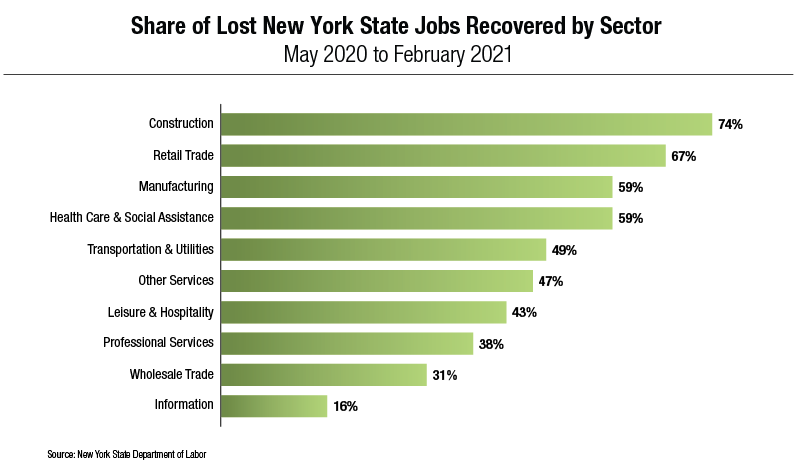 Employment growth may be drawing New Yorkers back into the workforce; the statewide labor force participation rate increased slightly to 59.9 percent in February (the low point was 56.8 percent in April 2020, but the rate has not improved in a steady trajectory).

The State unemployment rate ticked up to 8.9 percent in February from 8.8 percent in January (on a seasonally adjusted basis). In New York City, the unemployment rate increased to 12.9 percent from 12.6 percent, while for the rest of the State it remained at 6 percent. State and City rates remain greater than the national average of 6.2 percent.

New York State recently issued $634 million of voter-approved General Obligation (GO) bonds to finance a variety of critical projects, including those for environmental, transportation and education purposes, as well as to refinance prior bonds, achieving $50 million in savings to taxpayers. The bonds, which were priced by competitive bidding on March 16 and were delivered on March 23, outperformed expectations.

GO bonds are underpinned by the full faith and credit of the State of New York; that guarantee is attractive to investors in the municipal bond market. The market priced these tax-exempt GO bonds between 1 to 2 basis points (bps) below the benchmark Municipal Market Data (MMD) index. This was significantly better than other State-supported bond sales with comparable maturities, which were priced up to 45 bps higher than GO bonds. These reduced interest costs translate to long-term savings for New York taxpayers.