Since March 2020, the federal government has enacted six pandemic relief packages intended to offer support to individuals, businesses, and state and local governments. Three of these laws, the Coronavirus Aid, Relief, and Economic Security (CARES) Act signed in March 2020, the COVID-Related Tax Relief (CRTR) Act signed in December 2020, and the American Rescue Plan (ARP) signed in March 2021, authorized economic impact payments for individuals and families. These payments, sometimes referred to as “stimulus checks,” are intended to provide support to low- and middle-income individuals and households during the pandemic and to bolster consumer spending, particularly on essentials like groceries and household expenses. Eligibility for the checks varied under each package, but the payments were generally available to individuals with incomes up to $75,000 and married couples with incomes up to $150,000.

The U.S. Internal Revenue Service administers the economic impact payments and recently reported on payments made under CARES and CRTR. Under CARES, eligible individuals received $1,200 payments ($2,400 for married couples) and those with children received an additional $500 payment per child aged 17 and under. Nationally, 162 million payments totaling $271.4 billion were distributed. 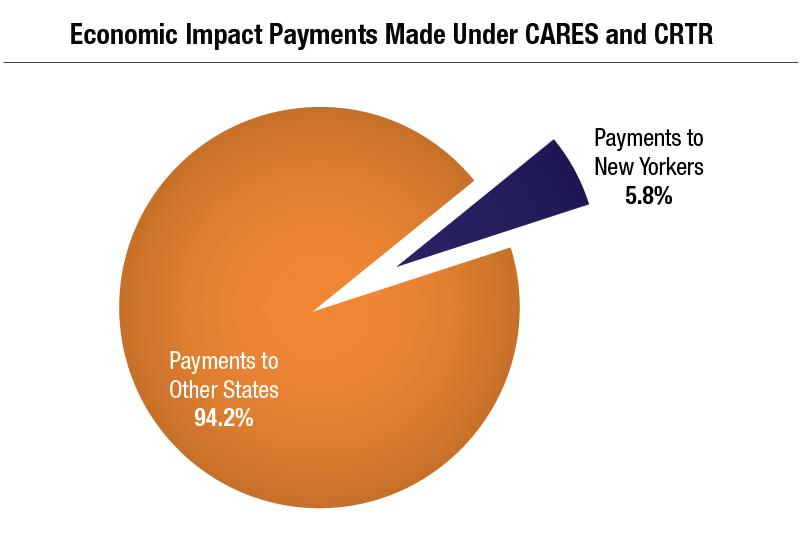 Economic impact payments under CRTR were limited to $600 per individual ($1,200 for married couples) and $600 per qualifying child; as a result, national payments declined to $141.5 billion. The number of payments declined to 146 million, owing to statutorily restricted CRTR eligibility requirements that barred payments to estates and trusts as well as taxpayers who were deceased prior to 2020.

In total, $412.9 billion in payments were provided under CARES and CRTR; of this, $23.8 billion (or 5.8 percent) was received by New York residents, accounting for 1.6 percent of New Yorkers’ personal income in 2020. New York ranked fourth among the states for the number of recipients as well as the amount of stimulus payments received, consistent with its general population rank.

Payments to New Yorkers totaled $15.7 billion under CARES and declined to $8.1 billion under CRTR; however, payments for qualifying children increased by nearly $136 million, as the per child amount was increased from $500 to $600. 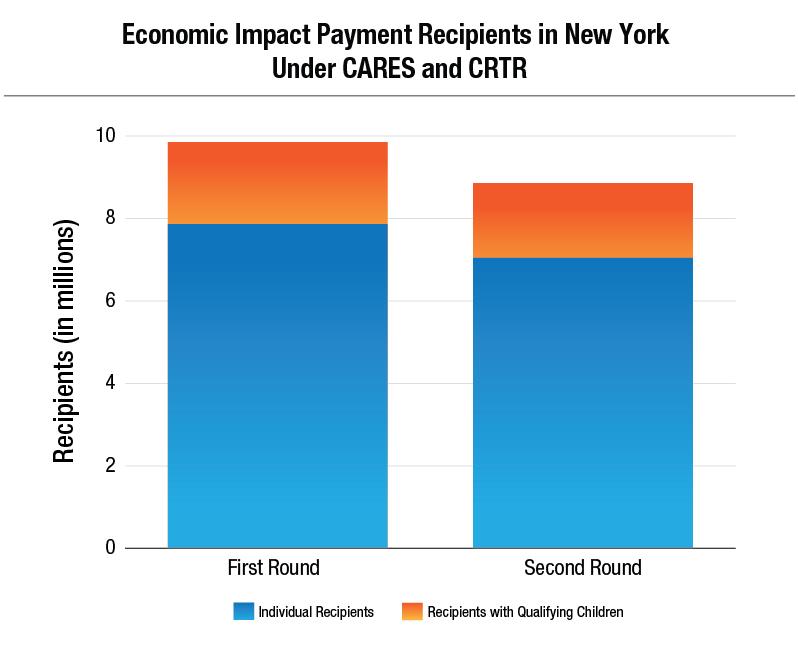 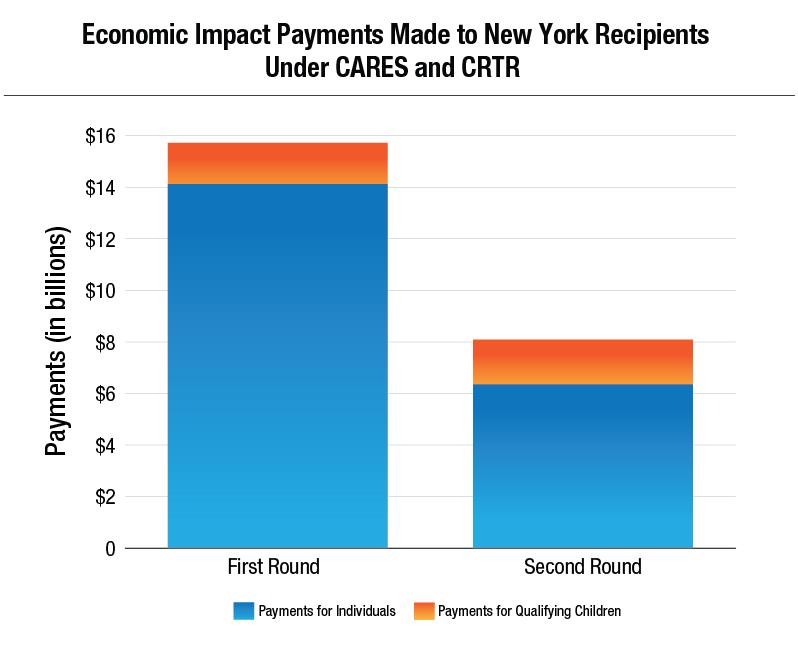 Comptroller's Report on the Enacted Budget

The Comptroller recently released his report on the Enacted Budget for State Fiscal Year (SFY) 2021-22. The Enacted Budget totals approximately $212 billion, an increase of nearly 10 percent over the prior year, and relies on almost $27 billion in new resources from better-than-expected tax collections, significant federal aid, and revenues from enacted tax increases and the legalization of online sports betting and recreational marijuana use. These resources will fund substantial investments in education along with programs to relieve struggling New York residents and industries.

Despite the influx of new resources, opportunities to improve the State’s long-term fiscal position were missed. The State continued to defer $3.5 billion in Medicaid payments and did not make any new deposits to statutory rainy day reserve funds, which remain at $2.5 billion. Despite a strong cash position, short-term borrowing was reauthorized. And, for the second consecutive year, State leaders circumvented the State’s statutory cap for debt.

In the coming weeks, the Division of the Budget (DOB) will release an updated four-year Financial Plan for SFY 2021-22 through SFY 2024-25, which will clarify the use and timing of federal aid, spending planned for future years, and the impact of revenue and expense actions on recurring budget gaps. The Financial Plan should also provide detail on several risks, including the volatility and temporary nature of new tax revenues and the sustainability of spending on key programs, including education and Medicaid. The Comptroller will provide his analysis of the Financial Plan when it is released by DOB.